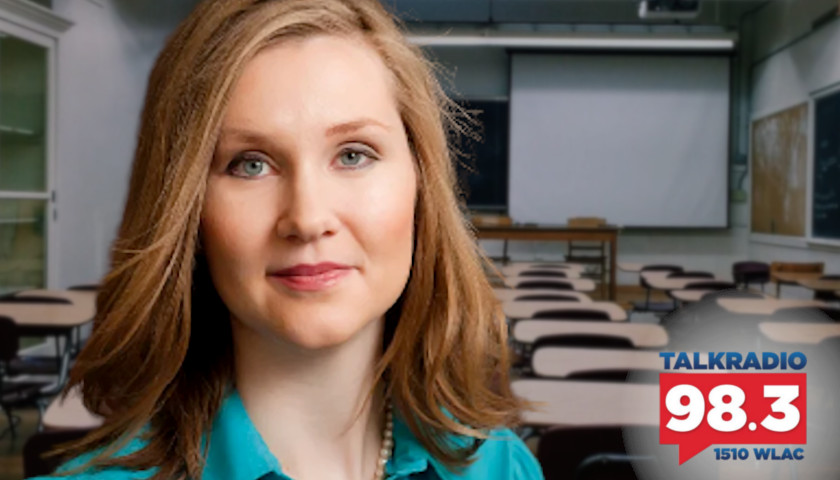 Live from Music Row Tuesday morning on The Tennessee Star Report with Michael Patrick Leahy – broadcast on Nashville’s Talk Radio 98.3 and 1510 WLAC weekdays from 5:00 a.m. to 8:00 a.m. –  host Leahy welcomed Federalist Executive Editor and Author Joy Pullmann to the newsmakers line who discussed her recent article at The Federalist exposing the defamation of conservatives running for a local Southlake Texas school board that oppose racist cultural competence plans.

Leahy: We are joined on our newsmaker line now by Joy Pullmann, executive editor of The Federalist. A great writer and author of a new article, Texas Agitators Get Dirty to Push Institutional Racism in Texas’s Number One School District. Good morning, Joy.

Leahy: It’s hard to believe that a top public school system in Southlake, Texas Carroll Independent School District is teaching that all White people are racist. I couldn’t really… is that really true? And I looked at it and I said, yeah, it is. How does this happen, Joy?

Pullmann: It seems to be, in the Texas case, really brought into the school district, which, by the way, is also a conservative school district voted, I think, almost 20 points more for Trump over Biden in the last election. And that’s a pattern going back to the last five presidential elections, Republican and Democrat. So this is not a community that really is woke.

And that was actually proven by the results of an election on Saturday for the school board we’re talking about. People who oppose the critical race theory in the school District won two school board seats with overwhelming percentages. I think the margin of victory was 10 to 15 points. Obviously, this is not coming from the local community.

This is not what the majority of parents in Southlake want for their children. And I think that’s true in a lot of places in the country. How it really came into the school district was by a number of activist administrators. So these are people using their positions that mid-level bureaucrats, basically, to impose a really extremist ideology that targets people based on their skin color.

Leahy: That’s a very important thing you said. We want to follow up on this. Mid-level administrators, it looks like they snuck in this 2018, a cultural competence action plan that included teaching children in each grade to see each other in racial terms. To be treated according to skin color. We have here in Middle Tennessee, in Williamson County, which is the affluent suburb just South of Nashville, and in Metro Nashville, Davidson County, they’re trying to put in all these cultural competence plans. Is this sort of the way that they’re trying to sneak a lot of these things in?

Pullmann: Yes. So what happened in this school district in 2018 a video went viral on social media of kids after homecoming singing along to a rap song that had a racial slur in it. And this was used as an example. I mean, really, it was kind of hijacked by people in the district that already believed that White people are inherently racist when they’re born.

To me, it sounds crazy to say that, but that literally is what this ideology teaches. And so I looked into skills that in the school administrators that teachers were being given in Southlake schools. And it literally said that it was teaching people to look at each other and divide themselves based on race. They wanted to criminalize children for obviously, nobody supports making mean racial comments to other kids.

Oh, your eyes look like this or whatever. But that’s a relatively minor kid behavior that you can address at the moment properly to teach the children what to do. As parents and teachers really need to do, communicate to children how to behave and help them grow up that way. But this school district wanted to really give those kids a criminal record for incidents like that.

They were applying to the state for a grant to create basically this tracking and monitoring system for kids, possibly with records that would follow them for the rest of their life. So a lot of kind of crazy stuff going on, and they give it the name of something that basically everybody in the United States agrees with.

They call it anti-racism. They say it’s trying to stop mean instances and cruelties based on race. And nobody opposes that. But the sort of solutions that are provided is really extremist and most likely to really cause more trouble rather than help kids love each other and treat each other equally.

Leahy: So the opponents of this cultural competence action plan that teaches kids to look at each other based on race have put together a political action committee that has fielded candidates at the mayoral level, at the city council level, and at the school board level. The election was held on May the first.

And as you say, it was an overwhelming victory to members of the school board that opposed this critical race theory teaching were elected. What happens now? How many members of the board are there? Will this have an impact? Will they get rid of this cultural competence action plan down there?

Pullmann: Yes. That is something that I talked with the parents about when I was writing this article. I believe there are five members of the local school board. And so two obviously is not a majority, but the votes have been narrow. So two actually do make a significant swing on the support on the school board for this plan.

And as well as this plan had really divided this local community and really set people up and had people on one side accusing the other of being closet racist, while the people on the other side were saying, actually, what we oppose is racism against anybody. And it has infected the mayor, the city council, all kinds of things. It was really being divisive to people.

It was a tragedy to kind of look at that and from an outside perspective and talk about how their personal relationships. I had one dad who said he’s a volunteer sports coach for some I think kids in middle school and one of the families whose children he had coached, they were good friends. They wouldn’t talk to him anymore because they thought he was a racist for opposing this school plan. (Chuckles)

So really sad personal things going on and really based on inaccuracies. So I think that’s really unfair to do to people and to caricature them as racist when they’re not. Obviously, if that is going on that should be addressed. But when it’s not, to smear someone with something that evil it’s really a bad thing to do. It really hurts communities.

But this local community, one of the things that so, like, has going for it is that it’s the top achieving school district in the state. This is largely because of the kind of parents they have there. They have people who are former court clerks for Supreme Court justices. That’s one of the new school board candidates who was just elected. Razor-sharp, top religious liberty litigation lawyers with decades of experience.

They have the other new school board person who was elected has led hundreds of millions of dollars of budgets for local aviation complex. The type of people in Southlake are high-powered and high-achieving people. They really had the resources to put together things like you mentioned political action committee to really take this head-on and to fight extremely hard. And obviously, it looks like they’re seeing some success.

Leahy: It’s interesting about this success winning these two school board seats, opposing critical race theory is the level of resources required to win. And the high quality. These are amazing candidates. These are candidates who could be candidates for federal office easily. But how many communities out there have this level of resource? This level of a candidate to fight back against the organized system, if you will, of promoting the notions of critical race theory that is all over the United States today?

Pullmann: That’s a question that actually people are really finding out right now by trying it. (Chuckles) I think South Lake had better conditions than many people in other places do. Their average income is four times the national median. So these are high-powered people again, so they have a lawsuit going on besides this. They know how to put together a political action committee.

I consider myself an intelligent, engaged person. I don’t know how to put together a political action committee. But at the same time, critical race theory is such an extremist ideology that really has been effective for parents to just literally get copies of the training of the information provided to children. And that’s really indefensible. If you take it to a school board meeting, to a teacher, to a principal.

There is no way a rational person could think that that’s not racist. It’s just so clear. I do think the extremism of this issue really gives parents a leg to stand on. There’s been a lot of coverage about it in the media. It’s become a National thing, with President Trump banning it from federal agencies. And President Joe Biden reinstating all of that and pushing it on schools.

But you have parents all across the country waging lawsuits and showing up to their school board meetings. And they are beginning to really have some success in places besides Southlake. I just heard the news that, for example, it’s Oklahoma and Idaho the two states that just banned this from their public schools. There are half a dozen other states that are considering that.

So those are major victories happening just in the past couple of weeks that wouldn’t have happened just three months ago. The entire terrain is different because parents have been standing up. They have been going to their state legislators, to their local school boards, and making a difference. It’s obviously hard. I don’t think everyone’s going to win in every case. I do think the conditions are really good and people are standing up and having success.