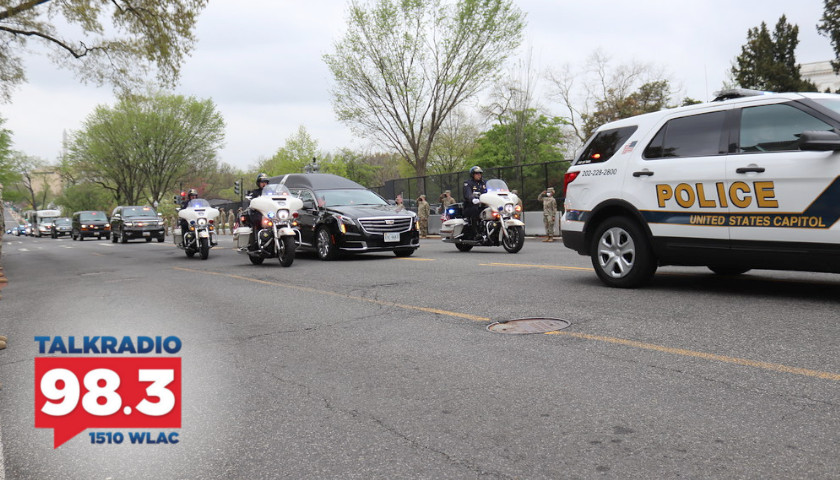 Live from Music Row Friday morning on The Tennessee Star Report with Michael Patrick Leahy – broadcast on Nashville’s Talk Radio 98.3 and 1510 WLAC weekdays from 5:00 a.m. to 8:00 a.m. – host Leahy welcomed the original all-star panelist Crom Carmichael to the studio to talk about truth, defamation, and the out-of-state jurisdiction of Capitol Hill Police offices.

Leahy: We want to talk a little bit about truth. What is the truth? How is it reported? Now we at The Tennessee Star and the Star News Network, we report the truth.

And when we report the truth, the establishment media distorts it and falsely reports what we’re reporting and then calls us misinformation.

Carmichael: Let me ask you a question because I know the standards are high for lawsuits. But if you report on a story, and the facts that you report in your story are provably the facts, and then another outlet proceeds to essentially say that your reporting on that particular story is dishonest, that’s defamatory because they’re publicly saying that you are dishonest.

Leahy: Yeah. That’s a very good question. And the answer is, we have the right to do that. The question is, do you have the financial resources to hire quality attorneys? We have great attorneys, by the way, to file the lawsuit.

And do you want to take that much time away from your duties or my duties as the CEO of the entity? That’s where we are right now.

But let me illustrate this, and it is irritating that so many members of the establishment media blatantly lie about what we report. Blatantly lie.

Well, that’s the first lie. We’re not pushing misinformation. We have factual reporting.

Then there’s a group called the American Press Institute. They told basically three lies about us in just a couple of sentences. I’ll put a number in front of each lie and I’m going to read these articles to you.

The Georgia Star News, founded just after November’s presidential election, is part of the Star News Network. A web of pro-Trump websites that, lie number one, mimic the look of local news websites.

And, lie number three, proof of massive voter fraud will be uncovered. Those are the three lies in two sentences about our reporting.

First, mimicking local news. We have 17 writers in eight states and each writer will do two or three stories a day. Any of our titles will have anyways, two to four local stories a day. Locally based.

Leahy: Now we’ve never claimed that former President Trump won in November. We have stated that in six battleground states, the election procedures were unlawful. And we’ve proven that.

We’ve proven that in Georgia that they have no chain of custody documents for 316,000 absentee ballots. And we have never – I never  – said that there is, “Proof of massive voter fraud will be uncovered.”

We haven’t said that. What we’ve said is that the available public documents are not consistent with lawful election procedures, and therefore, it was improper for the Secretary of State of Georgia to certify the election. That’s what we said.

Carmichael: Okay. Well, then everything that your paper has reported is based in fact.

Leahy: And demonstrated in fact.

Carmichael: Demonstrated. And in fact, you have gone to greater lengths by asking the state of Georgia to provide you with the documents that would support their case.

Then the local NPR station, I think it was claimed in Georgia that they had given the very documents that you had requested, had given it to them.

But then they refused to give them to you and gave them to somebody else who now says they are sealed.

And Fulton County, Georgia – on June 14, we told them 24 percent of these chain-of-custody documents are missing. Three days later, purportedly they gave those documents to Georgia Public Broadcasting. Still here on July 9, we have not received them.

Carmichael: Okay. Let’s give another story on the question of truth. The Capitol Hill Police.

Carmichael: Has now announced that they’re going to be opening offices in Florida and California, and they’ll be opening more after that.

Leahy: They’re just supposed to be protecting the Capitol. But now they’re basically an inquisition going out to every state in the country to look for people they don’t like.

Carmichael: Right. And the question that I have is what authority does a Capitol Hill Police person have to do anything outside of their jurisdiction?

Let me say this. A police officer from New York City, I don’t believe, has the authority to just come into Nashville and make an arrest.

Carmichael: Well, they don’t. And so where do they get it?

Leahy: They are making it up out of thin air.

Carmichael: And the Constitution, this was a big issue when Trump said that he was going to the military in to protect federal buildings.

They were being engulfed in flames. But the left claimed that – I think they actually claimed wrongly in this case – that the President of the United States does not have the right to send in military to protect federal buildings.

And that local law enforcement either is unable to do it or unwilling to do it because it’s not permanent in nature. These are going to be Capitol Hill Police.

They’re opening offices. So they’ll be permanent in nature. And so the question is, what authority does a Capitol Hill Police person have in the state of Florida?

Leahy: They have none.

Carmichael: To do anything? Well, they obviously are going to have some.

Leahy: I think they should be kicked out of the state.

Carmichael: They don’t have any authority. Well, that’s the question is, why are they there? Under what law is the Capitol Hill Police allowed to just go open offices and start harassing citizens in the name of protecting members of the House?

It’s also interesting is there are many members of the House who are openly advocating for defunding the police. (Leahy laughs)

Leahy: Except the Capitol police going after Trump supporters in states around the country.

Carmichael: Yeah. So the very people who want to put our citizens at greater peril by defunding the police, they’re advocating the expansion of a federal police force for their own use.

Leahy: Crom, insightful, as always. We’ll see you on Monday.