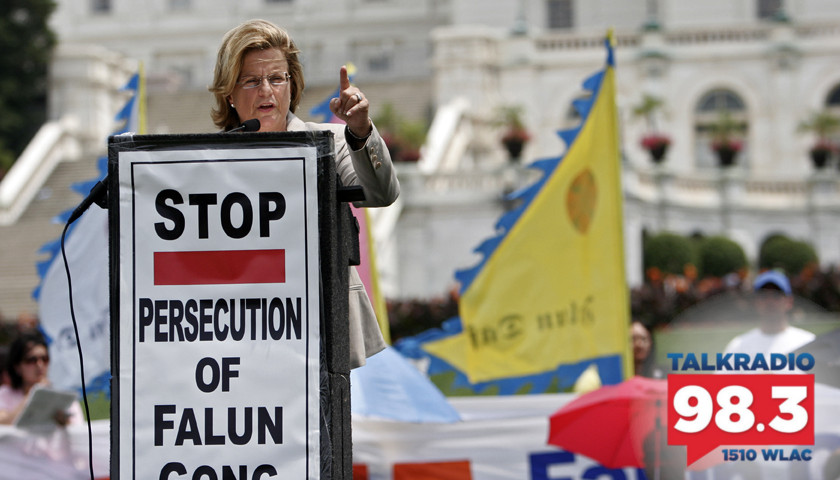 Live from Music Row Thursday morning on The Tennessee Star Report with Michael Patrick Leahy – broadcast on Nashville’s Talk Radio 98.3 and 1510 WLAC weekdays from 5:00 a.m. to 8:00 a.m. –  host Leahy welcomed the founder of Pajamas Media and all-star panelist Roger Simon to the studio to explain his practice of a Chinese movement in response to the communist government called Falun Gong.

Simon: Good morning, Michael. Every time you mention that I was your former voice, I think, well, maybe I should fire you right now and take over the show.

Leahy: (Laughter) There probably are some people in America who would agree with that decision, Roger.

Simon: I don’t think that. (Laughter) I’m not that good at getting up that early.

Leahy: Roger, you are a native of New York City.

Simon: Absolutely. New Yorkino as we used to say. I always thought as a little kid or even a 10-year-old kid who knew enough about The New Yorker you know that New Yorker cartoon, which shows New York the map of the world according to New York.

Leahy: I remember that.

Simon: Yeah. A lot of people remember it. It was a great cover.

Leahy: A great cover. A classic.

Simon: A classic. Definitely. That’s how they used to do things like that at The New Yorker but it’s now as dead as New York. But they used to do this cartoon of how New York was the great giant thing and then way out in the distance with California and then the rest of the country.

So growing up there, that’s the way I thought it was always going to be. And I was going to die in New York. But here I am in my 70s in Nashville, Tennessee.

Leahy: And delighted to be here I might add.

Simon: I’m pleased to be here, although I have my questions about the government of Tennessee. But compared to New York, it’s Athens.

Leahy: Well, of course, you know, Roger, Nashville has been for over a century, the Athens of the South.

Leahy: We have a Parthenon there.

Simon: I know that because, you know, every Sunday I’m out there by the Parthenon doing Falun Gong exercises.

Leahy: You told me about that. I called you one Sunday and you said  I’m in the middle of Falun Gong. (Simon laughs)

Simon: Well, you know, I’m not a joiner of anything. I wouldn’t even join my own club.

Leahy: The old Groucho Marx saying, I’d never joined a club that would have me as a member.

Simon: The only wisdom in this country is always said by Groucho Marx.

Simon: Those two. After that, it’s over. Because The Epoch Times has a number of people that are interested in Falun Gong and its founding. I figured since I’m an editor there that would I learn something about it and do the exercises.

Leahy: Tell our listeners what Falun Gong is and why it matters.

Simon: Yeah, it’s very interesting because in the 1990s, Falun Gong grew up in China in opposition to the government there. That is a little bit of a problem. As the listers know, you can go to jail for your ideas if you don’t like the government of China.

Leahy: It’s a movement. A recent movement in China.

Simon: But 100 million people are more joined it very quickly.

Leahy: What are the tenants of Falun Gong?

Simon: It’s kind of a modern version of Buddhism and Taoism. So it’s ancient Chinese wisdom that has a lot to say for itself. Everybody’s sort of interested in Buddhism because it’s more of a philosophy than a religion.

Simon: My two-word definition of Buddhism is cool out. (Laughter) And I think we could all do that. (Chuckles) Literally millions and millions of people joined the Falun Gong very quickly in opposition to the wretched Communist government of China and the Communist overlords got very annoyed.

Needless to say, annoyed in their inevitable Tiennamen Square “run over your adversaries” way. And they did a lot of things to the Falun Gong including forced organ transplant.

Leahy: Yikes! This is like a very bad dystopian science fiction novel. Dystopian, by the way, word of the day is a future world that is dark and evil and bad. The opposite of utopia.

Leahy: You are on today, Roger. That is very good. Anyway, many of the Falun Gong fled to the USA because they didn’t like that forced organ transplant.

Leahy: Imagine that! They are so selfish.

Simon: People have a line. If they were so Buddhist they should have cooled out about it.

Leahy: There is some exercise involved. Physical.

Simon: There are some exercises involved. I’m a complete neophyte in it resembles in some ways Tai chi. But they say oh no. It’s not Tai chi.

Leahy: It looks like Tai Chi but it’s not.

Simon: You got it.