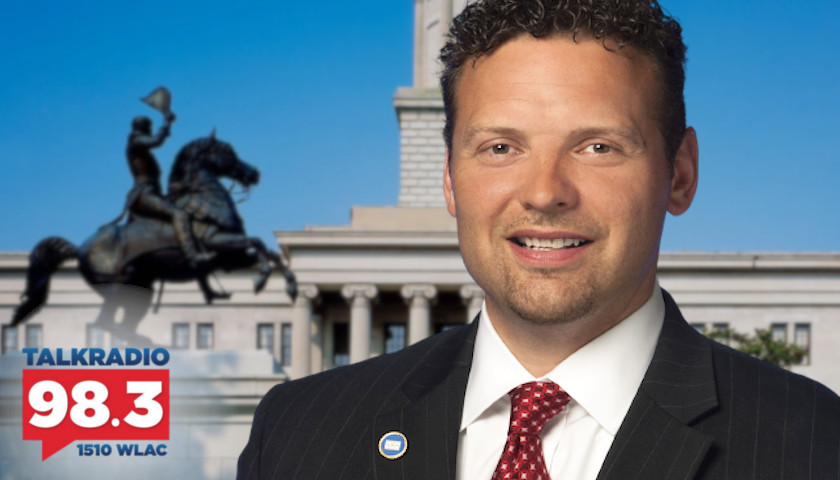 During the third hour, Zachary discussed next week’s special and legislative sessions that will focus on learning laws and how Tennessee will prepare to be the first state in the nation to use the block grant initiated by President Trump. He described his roles as being part of the ad hoc committee regarding executive powers and that he will be going after unelected health boards that are attacking individual liberty.

Leahy: I’m great. You may not recall this but you and I first met in 2013-2014 up in Maryville when you were running for Congress, I believe. And I was organizing the Beat Lamar campaign. Do you remember that?

Zachary: I do absolutely I believe it was even at the Blount County Library.

Leahy: Yes! You are exactly right. It was at the Blount County library and you have had quite a career since then very conservative member of the State House of Representatives here in Tennessee. What is the big agenda issue that you see in both the special session on education and in the regular session and thereafter?

Zachary: Sure. Well interestingly enough This is my fourth term and we are actually starting at a faster pace right now than we’ve ever started. Committees actually are going to be meeting today. We have something that most Tennesseans because of everything that’s gone on nationally most of what we’re doing right now is not getting attention. But we are getting ready to be the first state in the nation to move forward with a block grant from Medicaid.

The president approved that. We actually suspended the rules yesterday to be able to hear that in committee and walk that through the process. That will be an all-day endeavor for us here in the legislature. And that’s big news. But in terms of next week’s special session, I’m glad the governor’s done it because it really gives us the ability to focus on learning laws and focus on BEP funding especially for a county like my Knox County.

We are a donor county so we would take a significant loss with students not being in the classroom this year for BEP funding. We’ve got students and teachers that have just my wife’s a teacher. She’s a middle school teacher and the incredible stress that they’re under just keeping the doors open. So we’re going to address testing and holding schools and teachers harmless as we kind of walk through this.

Still providing accountability, but holding them harmless. It’s an important step to take and to get this off the table. Some of these steps we usually don’t take until May of the session. So it’s good to be able to take this now. But overall in terms of a special session when we come back probably that first week of February just from my perspective it’s really just doing what we’ve done since I’ve been here.

It’s making sure we do the best we can to limit government and limit regulation. Keep taxes low and keep spending under control. We’ve done a great job with that over the last 10 years and the record kind of speaks for itself. But we’ve got bigger work to do especially with this pandemic kind of hanging over everything that we do.

I’ve chaired the ad hoc committee regarding executive powers. And then I’m going after these unelected health boards that are attacking liberty and are big areas like it’s never been done before. Those are those that will be the two big things I’m involved in.

Leahy: Last night Murray County Mayor sent a letter to the governor and to the speaker and to the lieutenant and two members of the House and Senate and said look Facebook, Google, Twitter Amazon are stifling free speech. The state has some Authority here. There are $70 billion under management and invested by the state. He wants the state to divest of Google, Facebook, Twitter, and Amazon stock. And also to stop advertising with Google, Facebook, and Twitter. What do you make of that proposal?

Zachary: Well, I think that we have an oligarchy of tech companies that have been enabled by our federal government through Section 230. And it’s not something that has been talked about much. And I believe that indirectly the federal government is able to able to launch an assault on the First Amendment. I know some people have said well, it’s the first amendment, free speech and the First Amendment doesn’t really apply because it’s not government.

But it specifically says the internet companies are allowed to censor constitutionally protected speech. It says that specifically. I even Tweeted that a couple of days ago. And so the federal government is indirectly coming after the first amendment and working to silence us through that. I truly believe that. And these tech companies are leading the way. And if we have tech companies that are more powerful than the president of the United States then that’s a problem.

So I appreciate Andy. I know Andy, I appreciate him drafting that letter. We had a little bit of conversation about that this week. I think that will probably ramp up. We had an organizational period. And again we spent which never happens. We spent hours on the House floor yesterday going through this Medicaid block grant that we’ve got that we’re working to get past.

So I believe those conversations will ramp up after we get through this. And I’ve already had some conversations with various departments about where we stand as a state with those tech companies and absolutely it’s something that needs to be addressed. I’m glad he wrote the letter.

Swain: Now what are you all doing to prepare for the assault from the left? Because we know what the Biden administration, we already see it with the media and the local media. They’re willing to lie and distort when it serves their purposes. They will come full force against you guys. Have you planned your strategy?

Zachary: Yes, Carol. That’s a great question. It’s interesting you ask that because actually the governor and I were texting about that a couple of days ago and about firewalling the state of Tennessee. What steps do we need to take and what planning needs to be done even above and beyond what we typically do to firewall us from the federal government.

Swain: Well that’s the problem. But the other part is that when you’re dealing with the Medicaid block grant and these other issues the left is going to come at you full force as far as the media. Do you have a plan as far as selling your ideas to the public so that they will not be distorted by the left?

Zachary: We do. actually yeah we had a caucus meeting and discussed that yesterday specific to the Medicaid block grant program. Here are just the quick details. So it’s basically a block grant that comes to us from Medicaid and it gives us incredible flexibility. Right now we have what could buy what most publications considered one of the top five run Medicaid programs in the country. Ours is TennCare.

But right now when we are not rewarded or incentivized to save and steward resources well. So we can save money. But we as Tennesseans don’t get to participate in those savings. So now what this block grant does is they provide us with the block grant with just a few requirements versus the incredible strings and entanglements were under now. But any savings that we incur we’re able to keep half that money versus sending it all back to the federal government.

Swain: The part that you keep, are you able to use it for medical expenses? Because we know that there are increased costs that relate to the elderly and those costs will probably be increasing rather than decreasing because of the age of the population. So, how will the savings be used?

Zachary: Yes ma’am that’s a great question. That was going to be my very next point. It will give us the ability to do is enhance the services within Medicaid. During the pandemic that role has grown by 100,000 Tennesseans have been added to the Medicaid program. But with the additional savings, it will allow us to give enhanced services. It will allow if we chose to do so to increase the various populations that we’re servicing.

Provide a higher quality of healthcare because of that savings. It will give us much more flexibility to run it the Tennessee way. But it won’t cost more money to us or the federal government because we will be much more efficient. Because we don’t have the entanglements and requirements of the federal government. Something we talked about yesterday Carol, in talking about messaging. I’ve already started getting emails about it.

But it will allow us in the Tennessee way to expand populations if we chose to do so without the entanglements and the cost associated with what would have been Medicaid expansion. We’re going to be so much more efficient in the way we run the program that we will be able to serve larger populations in some respects if we chose to do so. It doesn’t mean we have to. The rolls have swollen to 100,000 over the last year and we’ve been able to walk and manage through that.

Leahy: Jason Zachary. Thank you so much for joining us today. Very enlightening.