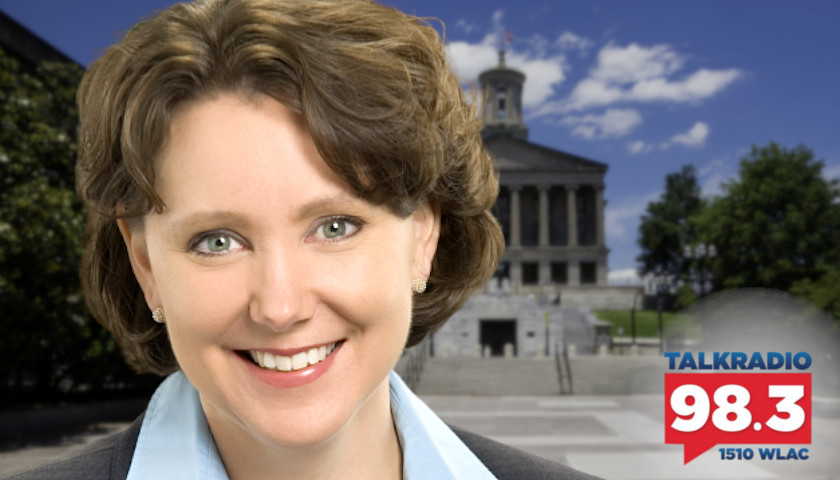 Live from Music Row Wednesday morning on The Tennessee Star Report with Michael Patrick Leahy – broadcast on Nashville’s Talk Radio 98.3 and 1510 WLAC weekdays from 5:00 a.m. to 8:00 a.m. – host Leahy welcomed the executive director for the Tennesse Coalition for Open Government, Deborah Fisher in studio to discuss her background the mission of the organization.

Leahy: We are delighted to have in studio our new friend, who we should have met a long time ago. Deb Fisher, the executive director of the Tennessee Coalition for Open Government. Just before we get started. You’re from Paducah, Kentucky?

Fisher: I grew up there. Yes.

Leahy: Paducah. Went to college where?

Leahy: A Baylor Bear. What a fabulous school that is. They’ve done very well. And now you spent your career in local journalism, right.

Leahy: So you were in Tyler, Texas.

Fisher: Tyler and Beaumont, and then for several years and Corpus Christi as the editor of that newspaper there and then moved to The Tennesseean as the business editor and then eventually became the senior editor for news there. I oversaw the news part of the operation, the investigative team. A lot of the reporters.

Leahy: You know what you’re doing?

Fisher: I’ve been around.

Leahy: You hired a good friend of ours.

Fisher: I did. Clint Brewer, right.

Leahy: So, you know, quality. Obviously, Clint is an all-star panelist here. A frequent guest on The Tennessee Star Report. In 2003, you set up this Tennessee Coalition for Open Government.

It’s a 501 (c) (3) nonprofit, small but mighty. And tell us what the objective of the Tennessee Coalition for Open Government is. Where can people learn about it on the web?

Fisher: So we do have a website. It’s TCOG, tcog.info. And we’ve had that website up for quite a while. Our mission is to preserve and promote open government. We really focus on access to public records.

We focus a lot on open meetings. That’s been a big issue for us in the past year. We track legislation that would impact those things. We also track courts and decisions that impact access to that.

Leahy: Now ideologically, would you say you are center-left, center-right, or nonpartisan? Where would you describe your center for Open Government?

Fisher: Ideologically, we’re nonpartisan. We stay in our lane. We are very interested in public records. I run a helpline and I get calls from people with all kinds of different ideological backgrounds and interests in public records.

But our belief is that people need access to public records to know what their government is doing to be able to make informed decisions about who they elect and what they tell their representatives.

Leahy: Do you focus mainly on state and local documents or on federal documents?

Fisher: No. We focus entirely on the state. Obviously, we get questions about federal documents. TVA operates in our area, and all the federal agencies operate in our areas and they intersect.

But our focus really is on Tennessee law and access to state and local governments, because that’s an area that’s not really covered by a lot of people.

Leahy: Tell me about it. It is not. It’s very much ignored.

Leahy: In the 18 years since you set this up, would you say Tennessee state government has become more, less, or the same in terms of transparency?

Leahy: So it was running for 10 years?

Fisher: But people ask that all the time. I think probably the biggest difference is that I think we have more problems with certain types of records. Certainly, you have more people and spokespeople in government putting out narratives and our thoughts are that’s great. They give out information, PIOs.

Leahy: This is a job at every state agency department that has a PIO.

Fisher: You mentioned at the top of the hour that there was a correction of a statement, and I don’t know anything about that story. But what I do know is that public officials can say things, but what we always and what I always tell reporters is you need to check it out.

You need to have a document state of mind, because the public records really document what happened, which sometimes can be different than what people say. And so that’s really why we focus on access to those. And sometimes that’s why those things are hidden.

Leahy: Now, let’s get to this bill. Two bills passed yesterday in the special session of the Tennessee General Assembly. One set up this governing board for the Memphis regional mega site that appears to be not all that transparent, at least from what I read.

And then another bill appropriated $884 million for use by Ford. Elements of the $500 million incentive and its clawback provisions also appear to be very transparent.

Do I have that right? What can you tell us about these two bills that were passed to incentivize Ford to come to West Tennessee?

Fisher: The governor said that the legislative hearings offered some kind of visibility into the deal. And that is true. There was more information that lawmakers learned about the deal, but the documents, the proposed agreement with Ford is still confidential.

So we don’t know the details about the clawback. And we know that there are clawback provisions, but that’s the idea. In terms of setting up the authority right there in the legislation were some major exemptions to the public records law.

The one that we were most concerned about was the one that allows the new CEO of the mega-site authority to keep any record confidential that he or she, I suppose, considers sensitive for five years.

And we’re concerned about that discretionary authority of really one person and who has to get approval from the AG. But basically, one person making that decision.

Leahy: I just learned about that today talking to Scott Cepicky. That part is very troublesome. We’ll get to the money in a bit and the clawback and the lack of the details and the confidentiality.

Actually, most things about this deal seem to be directly confrontational to the mission of your open government coalition.

Fisher: We really don’t take a position on economic development and whether the deal itself is good for West Tennessee, and it’s been described as a game-changer, and it may well be. I mean, we’re not taking it.

Leahy: You’re not focused on that. You’re talking about transparency.

Leahy: But I don’t want to put words in your mouth, but it sounds like if you were to grade this on transparency, A being just what you want. B being kind of there. C is not so good. D being major problems. I don’t think you’d give this an A.

Fisher: I wouldn’t give it an A. We’re always concerned when an organization is set up that has these major exemptions to the public records law, because you may not know the impact now, but down the road, when you’re trying to get information, you’re trying to get accountability about what actually happened there’s an automatic wall there to get that information.

Leahy: It sounds to me that this automatic law won’t apply to this commission that’s running it.

Fisher: Well, I mean, some laws will. The exemptions don’t cover everything. There will be access eventually to the agreement. Although, of course, the CEO could decide parts of it should be confidential.

But in general, the governing body will have open meetings. And I know that the legislature was really concerned about the makeup of that governing body, which is why you saw an amendment to that bill to add more oversight with lawmaker appointments.

What I saw in the questioning at the legislature is they were really concerned about who this board reports to the accountability of the board. But the lawmakers weren’t quite ready to make changes to the public records exemptions.

And then the speaker and the lieutenant governor will jointly appoint someone else. That’s eleven people. Now they will hire the CEO, is that right?

Fisher: Right. They’ll hire the CEO, and they’ll be in charge of kind of executing the contract, building out the site. The state owns the site, so they’ll have their hands on a lot of things.

Leahy: Does it show how they will go about selecting that CEO?

Leahy: So any board, they can pick whoever they want in a normal majority vote. Hmmm. This is all very interesting to me Deb Fisher.