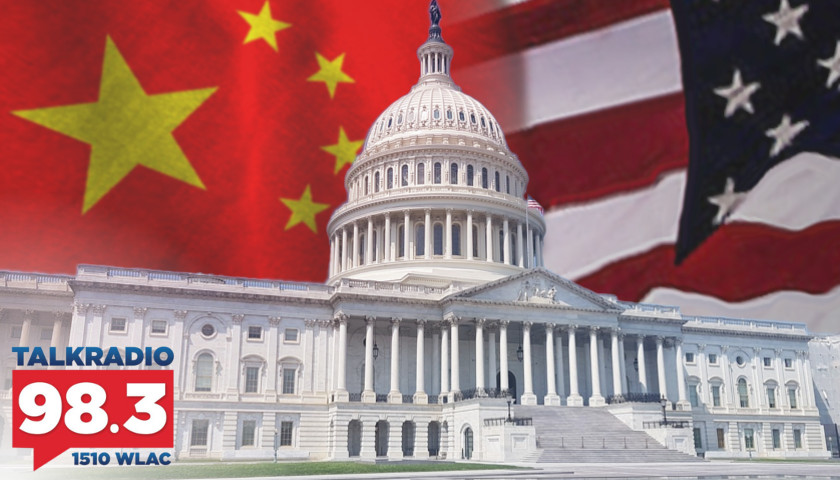 Live from Music Row Monday morning on The Tennessee Star Report with Michael Patrick Leahy – broadcast on Nashville’s Talk Radio 98.3 and 1510 WLAC weekdays from 5:00 a.m. to 8:00 a.m. –  host Leahy welcomed the original all-star panelist Crom Carmichael to the studio to outline how Democrat’s continue to chip away at American’s individual freedoms and China’s clever co-opting of its institutions and politicians.

Leahy: Crom, if there’s a bad idea, the United States House of Representatives, led by Nancy Pelosi, is certain to pass it.

Carmichael: It really is amazing, of course, now she has an agenda. And as I’ve said many times, I’m going to repeat myself yet again, the Democrat Party has become the party of government. And so her agenda is to give the government more power and to make as many people as possible feel beholden to the government. So everything she does is to further the power of government. And to weaken. And by the way, in to weaken the rights of the individual.

Leahy: Absolutely. The House last week on Tuesday passed a bill and sent it to the Senate where hopefully it’s going to die. But we’ll see. That was based on this very bad California law that in essence, outlawed independent contractors, destroying the gig economy. Now it passed in California. There’s an article at Reason Magazine about this. In November, California approved a ballot initiative that vetoed parts of that very bad bill that outlawed independent contractors. The question is, why are Democrats in Congress trying to force those rules down the throat of the entire country? That’s what Reason said.

Carmichael: The answer is that Democrats in general, but particularly liberal Democrats hate right-to-work laws because they want everybody to be a member of a union so that they then have to pay dues. And then 98 percent of all union dues go to Democrats. And the unions also then are able through forced union dues to employ people who are working politics on a full-time basis.

Leahy: On a full-time basis. Let me just elaborate on that Crom. You said something very important. This is a problem here that we face, left versus right in America. If you’re a left-wing, Marxist, neo-Marxist agitator and you want to be full-time employed working to destroy America, you just put your hand up. And there are just 100s of nonprofit organizations funded by anti-American left-wing billionaires. They’ll give you a job.

Carmichael: Because there are all kinds of people who work for unions who do nothing but political stuff.

Leahy: And on our side, here’s how it works. This is the disadvantage conservatives face. And everybody in our listing audience says, yeah, yeah. They look around and every time you turn around, there’s this huge push to do something really stupid left-wing. And the question is, well, where are our people pushing back? Well, most of our people are working.

Carmichael: Well, they’re not nearly as many billionaires on the right either.

Carmichael: I would say that 80 to 90 percent of the billionaires are supporting left-leaning organizations. And I think they do that out of their own self-interest.

Leahy: It is self-interest because they don’t want the left coming after them for their money.

Carmichael: Warren Buffett figured that out a long time ago.

Leahy: He figured that out a long time at how you protect himself.

Carmichael: He figured out that the best way to protect Warren Buffett is to claim he should be paying more taxes, but then not follow through by paying more taxes all on his own, just to show that he really means it.

Leahy: He doesn’t pay that much in taxes. And he takes advantage of every tax law. Although he writes these editorials, (Wimpy voice) “I should be paying more.” He doesn’t pay more. He’s a hypocrite. All you Warren Buffest fans, you can invest in Berkshire Hathaway and make a lot of money but the guy is a hypocrite.

Carmichael: And this is why big business now is giving most of its money to Democrats is they’re doing it as a way to protect themselves. It really is as I told you, I’ve been watching this series on mobsters. And in the olden days, one of the things that mobsters did was they just took money from small retailers and in a particular area as protection money, saying, if you don’t get me the money, people will rob you or burn your store out or something like that. So if you give me money, I’ll protect you. That’s what’s happening now is that if you want to be a protected company and if you say something that is mildly conservative, for example, I hope the people of Hong Kong remain free.

Carmichael: If you say something like that, then you’ll lose your job.

Leahy: Especially if you’re in the NBA.

Carmichael: Yes. But I’m saying virtually anywhere that if you stand up and generally as a business or as a CEO if you come out for freedom of the individual and if you say negative things about China, there’s a very good chance that you’ll lose your job. So that’s true.

Carmichael: That is a true statement because the amount of money that the Chinese have figured out is that you can buy people. And if you buy people in power, then you can extort all the rest by having them fear the people in power. And so that’s what the Chinese have figured out how to do. The Soviets never did it because they never had the money to do it.

Leahy: Yep. Just gave it to them. You look back and this whole theory, it was sort of a Kissinger Nixon philosophy, right? The opening of China. If we show them the wonders of capitalism, they will then adopt Western civilization values.

Carmichael: They’ll become more like us. And that turned out to be false.

Leahy: Exactly. It’s modern mercantilism, but very clever. What they’ll do is they’ll go into an underdeveloped country, and they say we are going to put up the money to build your ports.

Leahy: We’re going to build the money to build your roads. That money has a little catch to it. High-interest rates. And if you don’t do what we want, we’re going to call the money.

Carmichael: Well, and not only high-interest rates, but we then have the right to come into your country and operate mines or do what we want to exploit your natural resource.

Carmichael: In other words, they go into the countries that have natural resources, and then they take advantage of the fact that they’ve co-opted the government. Now, in co-opting the government, they greatly enrich the people who run those governments. They have a very good understanding of human nature and how to exploit that aspect of human nature. Our left-wingers understand it. And our left-wingers, by the way, get very rich. I’ve got all kinds of stories here about people in government that are enriching themselves while they claim to be public servants.

Leahy: Well, the problem going on with China right now in essence, they have a very sophisticated 21st-century colonialism. But actually, they provide fewer protections for those that they are colonizing than the British did or the other Europeans did back in the 19th century.

Carmichael: They go in, and they co-opt entire governments by enriching a few people at the top and then providing them with all the support they need to remain in power.

Leahy: They’ve done a lot of that here in the United States as well.