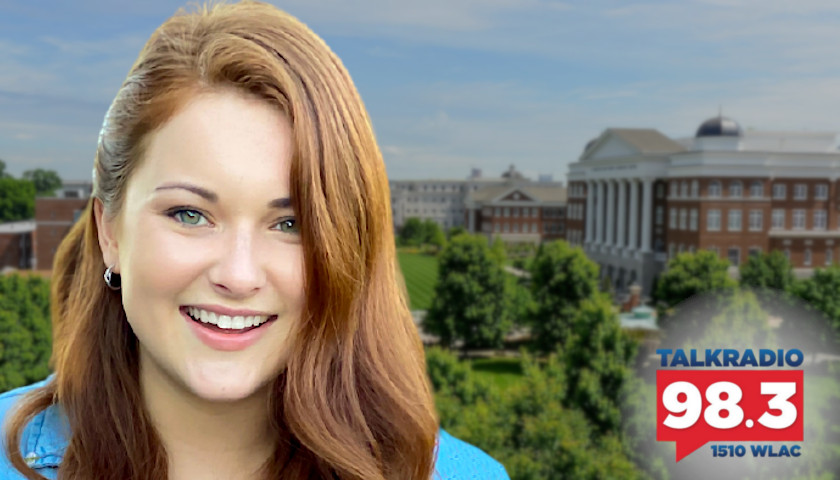 Live from Music Row Friday morning on The Tennessee Star Report with Michael Patrick Leahy – broadcast on Nashville’s Talk Radio 98.3 and 1510 WLAC weekdays from 5:00 a.m. to 8:00 a.m. –  host Leahy welcomed the president of Belmont University’s Nashville Chapter of the Network of Enlightened Women to the studio to discuss the bias and challenges she and her chapter of conservative women face on campus.

Leahy: We are joined in Studio by Allison Santa Rita. She’s the president of the Nashville chapter of the Network of Enlightened Women. Good morning Alison.

Santa Rita: Good morning. Thank you so much for having me. It’s so great to be able to be here especially after being followed by our founder Karen Lips. That’s incredible.

Leahy: So you’re a student at Belmont?

Leahy: Where are you from originally?

Santa Rita: I am originally from around the area of Indianapolis, Indiana.

Santa Rita: Absolutely. They were actually our rival in school.

Leahy: Where’d you go to work to get high school?

Santa Rita: I went to Noblesville High School. So I went to a public one.

Leahy: So who won?

Leahy: So what brought you to Nashville? Why did you choose it?

Santa Rita: I had always wanted to go into the entertainment or music industry and Belmont just seemed like the perfect place to do that. And also who doesn’t want to live here in Nashville during college?

Leahy: I would agree with that and by the way, we’re talking off-air that my wait for my first cousin twice removed. That is the granddaughter of my first cousin who is going to be enrolling at Belmont. She’s got a scholarship to play sports there. So we are delighted to have her here in town. Extend the Leahy family here in Nashville. And so you’re part of the Nashville family now.

Santa Rita: Yes, absolutely. I quite enjoy it. (Chuckles)

Leahy: It is a nice place, isn’t it to be a college student?

Santa Rita: Oh, absolutely. I mean it’s not just the opportunity to really do whatever you would want, whenever you want. But also especially as a music student, it’s incredible to be able to go make those connections at the writers’ rounds that they have almost every single night throughout the week. Which is absolutely incredible.

Leahy: So you’re majoring in music?

Santa Rita: So I’m majoring in the music business with an emphasis in business.

Santa Rita: Yes. Absolutely. At least I hope so. and especially on our college campus. I’m sure a lot of people are worried about their children or grandchildren going into college. And I think it’s super important to have organizations such as the network of enlightened women to help keep us grounded and keep us on track with our beliefs. And it’s incredible what they’re doing and I really do think they are producing the next round of conservative women who are going to stand up and fight for our beliefs throughout these next couple of years.

Leahy: So how many members of the Nashville chapter of the network of enlightened women are there?

Santa Rita: Yes. We love it. We noticed that we do have 100 women who are signed up and they do stay active with events that we have. But then we have like about 40 women who are just so active and they are absolutely incredible. And they’ve joined committees. They do social media takeovers for us. They help with social media or really any aspect that they have the opportunity to jump in and be active they do it.

Leahy: My question to you is, are conservatives and particularly conservative women isolated on the campus? Do you get a lot of negative feedback from various folks?

Santa Rita: Yes. Absolutely. One story. There are so many stories but one is that we have a Twitter handle, not directly related to Belmont. They say they’re not affiliated but it’s all Belmont students and it is incredibly toxic. And once two even three times a week, they will make it a point that conservatives are not welcome on campus.

Santa Rita: What they do is they have probably a group of people that for sure go out when we are on campus and they’ll take videos of us and try and ask us questions. Or if I go out and put QR codes on tables and say hey would you like to join our community? Tell them a little bit about it. Within the next hour, all of those QR codes will be removed from the whole entire campus. And they were actually tweeting about it and they said conservatives are not welcome on this campus. You have no Community here. and not that you don’t have a community, but we don’t want you to have one.

Leahy: But these are just students right?

Leahy: What’s the administration do there?

Santa Rita: They do not care.

Leahy: They don’t do anything to defend you.

Santa Rita: Nope. Not at all. In fact Network of Enlightened Women does not have an actual chapter at Belmont because they said that we are not allowed to have a national advocacy organization anymore on Belmont’s campus. But we’re not. We’re a 501 (c) (3) non-profit.

Leahy: So that’s their excuse, that you can’t have national advocacy groups there?

Santa Rita: So what actually happened is we applied last fall semester and they were just coming up with excuses like oh reformat your bylaws, do this do that. And so I had gone on for about three months of redoing stuff and trying to keep in contact. And every time I would ask, just excuses. Then the next semester rolls around which is this semester and I said, hey, what’s the update? We have some incredible women who want this to be a Belmont chapter. And they said, I’m sorry, we have changed the rules. We are no longer allowing national advocacy programs.

Leahy: Was that basically to keep you guys from having a chapter?

Leahy: So if we had somebody from the Belmont administration sitting here, what would they say about you and your conservative group that just wants to have an opportunity to be on campus like every other group out there?

Santa Rita: So I’ve had conversations with them and all they say is you know, we had to change those rules because we’re trying to keep it local.

Leahy: So you are not local apparently. The chapter of a national group is not local is that the new standard?

Leahy: Well, but why are you paying these guys’ tuition if they’re so mean to you?

Leahy: That’s a serious question. Why spend a lot of money with these people that don’t like you because you actually have a point of view that they don’t approve of?

Santa Rita: Yeah, so that’s a great question. Though at the end of the day I’m there for an incredible music opportunity to learn from some really great professors who most of them are a little bit like-minded with me. Which is incredible.

Leahy: Shh, don’t tell anybody that. (Whispers) You might get them in trouble.

Santa Rita: But that’s okay because those that are not like-minded are very vocal to us.

Leahy: So the professors that are not like-minded Are they mean to you? What do they say? Do they say, you know, get out of here? Are they a little more muted in their conversations with you?

Santa Rita: So there are professors on campus who will not allow conservatives to write about conservative topics because we have to get them approved on papers.

Leahy: You mean in a class?

Leahy: As a normal part of submitting papers in the class? So they’re constraining freedom of speech in their classes.

Santa Rita: And we try to fight it. and there are some people that are working on stories about it. The best we can do is get our voice out there tell our stories and really talk about what is happening. But at the end of the day, I am there for a music degree. And sadly the music industry does not agree with a lot of my beliefs.

Leahy: Well, that’s probably true. So you get the music degree and then you go out into the music industry. And do they hate conservatives too or is it a mixed bag?

Santa Rita: I’d say it’s a mixed bag, especially on the business side you might have a little bit more of the conservatives. But in the actual industry, you’re probably going to be stuck with some not so like-minded people. But you know as a conservative I find it very important to surround myself with those of opposite views. I think that’s incredibly important especially as a student

Leahy: You see liberals don’t do that.

Leahy: I mean if you’re a liberal you gotta you can only talk to liberals. You can’t even entertain the thought from a conservative. What’s it like psychologically for you and your fellow members of the Network of Enlightenment Women Nashville chapter here in Belmont? What percentage of your fellow students in the administration are just actively trying to undermine what you’re doing and try to be mean to you?

Santa Rita: Yeah, I don’t know the exact percentage but it feels like a lot. I would definitely say we are the silent majority. So those that are vocal or not conservatives normally. So it really does feel like about 70 percent of the campus is trying to get us. So it’s really tough at times. One of the things we have really have focused on in the Network of Enlightened Women is Nashville’s community because we realized…

Leahy: Internally with your folks? How do people get in touch with you?

Santa Rita: They can get in touch with Network of Enlightened Women-Nashville on Instagram. And we kind of reply to our DM’s and we make sure that we are I’m staying active with them.

Leahy: Alison Santa Rita thanks. The president of the Nashville chapter of the Network of Enlightened Women. Good luck and keep us posted. Ad let’s hope the administration at Belmont starts to be a little bit nicer to you guys.

Santa Rita: I hope so too.