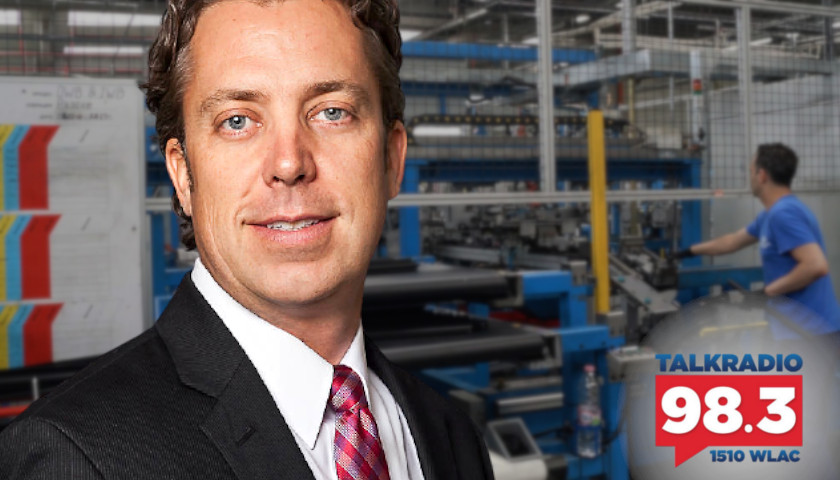 Live from Music Row Tuesday morning on The Tennessee Star Report with Michael Patrick Leahy – broadcast on Nashville’s Talk Radio 98.3 and 1510 WLAC weekdays from 5:00 a.m. to 8:00 a.m. –  host Leahy welcomed Maury County Mayor Andy Ogles in the studio to discuss the current economic growth his county is experiencing due to an influx of manufacturing and supply chain demand.

Leahy: We are joined in studio by the mayor of Maury County, that bastion of economic freedom, the turbocharged engine of economic growth. The mayor, Andy Ogles. Good morning, Andy.

Leahy: Well, I am delighted to have you in studio here. And, you know, we kind of joke about that little tagline we have for Maury County, except it’s no joke.

It’s actually true. It is the bastion of freedom and the turbocharged engine of economic growth. And I think you have some proof of that to share with us today.

Ogles: Obviously, all you have to do is drive around Spring Hill, Columbia, or even on the Southside down in Mount Pleasant and see the growth.

We’re also the number one creator of manufacturing jobs in the state of Tennessee. So it’s a crazy time to be mayor of such a growth in the county because that comes with a lot of challenges.

And that’s one of the things that we’re working through now as we pass our budget and get ready for the next school year deciding, do we build a school this year or next year.

Because there’s a borrowing that’s associated with it. But it’s crazy. So it truly is not only a bastion of freedom, but we’re turbocharged. And again, it’s a cool community.

Leahy: One thing I really like about what you just said is you’re a source of new manufacturing jobs. Now, that’s interesting.

Leahy: Sometimes. I don’t know when one of the financial services companies came in before they got a bunch of money from the state of Tennessee before they even opened up, they were trying to tell Tennesseeans and what they should do about various social issues. It kind of rubbed me the wrong way that they did that.

Ogles: Well, at the same time, obviously, the state of Tennessee landed a big operation of Facebook here in Middle Tennessee. And so at the same time that Facebook is censoring former President Trump, the state is giving Facebook tens of millions of dollars and incentives. So not necessarily the right fit for our state.

Ogles: Tens of millions of dollars. I saw Marjorie Taylor-Green, the representative out of Georgia. She was just suspended on Twitter for 12 hours or something, but she quoted factual data about COVID and who is at risk.

Leahy: You can’t do that. (Laughs)

Ogles: And she was censored because of it. And I granted it was for 12 hours. But again, it just shows the authority and the power that these tech companies have or have assumed.

And we the people and the government have allowed them to do that. And it’s really this situation now where you have social media companies dictating health care policy, and that’s a scary place.

Leahy: Because nothing says healthcare knowledge like a 24-year tech geek in a basement in Palo Alto, California.

Ogles: Right. You go back to Brave New World or 1984, those books that were science fiction back way back when I read them in school.

And it’s all coming to fruition. So we’re in an interesting place. But going back, Maury County is known for its automotive base.

Leahy: General Motors and Saturn way back when in 1990, I guess Saturn moved to Maury County.

Ogles: In the mid-late 80s that plan came to fruition, was announced. And of course, they had to implement it, but also automotive related.

And a lot of people don’t realize this. And so LG Chem, which is a South Korean company, partnered with General Motors. They’ve created a battery brand that will be a supplier to most of the other car manufacturers.

So again, you have General Motors, who will be one of the drivers of battery technology as you go into the future because they have such a large market share.

And this battery plant that we built in Maury County, it’s sized to be built, currently has more capacity than all the other battery manufacturers in North America.

And that puts the EV or electric vehicle technology – the center of that universe is in Middle Tennessee, specifically Maury County. So now we have this – General Motors expanding.

We have this new $2.3 billion plant with the LG Chem. And with that will come technology and RND and all that sort of stuff to Middle Tennessee.

So it’s exciting. And you’re seeing a shift in that space not only for Tennessee but for Maury County.

Leahy: And the other thing about – that is I found out that apparently, if you have sort of a supply chain, shall we say, for automotive parts and automotive assembly, which is what we have here in Middle Tennessee, there are other industries that use those same skills like firearm manufacturers, from what I hear.

Ogles: Because as you’re building out your infrastructure and supply chain, which that’s an important part of that and distribution capabilities, any industry that needs those types of services like trucking, et cetera, they can piggyback off of one another.

And so with that again, Maury County, known for its automotive and manufacturing jobs, are now creating a new layer of distribution for Middle Tennessee.