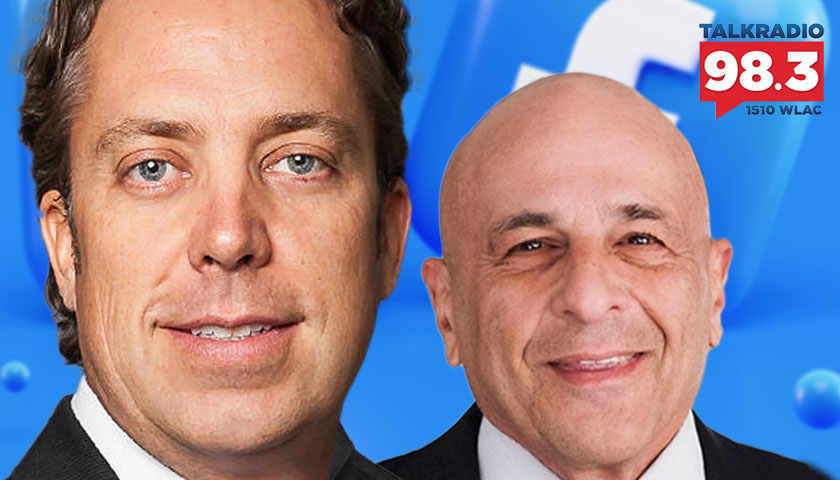 Live from Music Row Tuesday morning on The Tennessee Star Report with Michael Patrick Leahy – broadcast on Nashville’s Talk Radio 98.3 and 1510 WLAC weekdays from 5:00 a.m. to 8:00 a.m. –  host Leahy welcomed Maury County Mayor Andy Ogles in the studio to discuss the Project Veritas Facebook whistleblower and the companies power as larger than many nations.

Ogles: If you look at what Florida’s done in the bill that they’ve passed, this is akin to this social score.

Ogles: So to back up just a moment, Florida has a state legislator down there who came up with this tech censorship bill.

Leahy: Randy Fine. He’s been on our show. Great guy.

Ogles: Yes. And so I’m a fellow with Club for Growth. He is as well.

Ogles: Well, I guess, but it was one of those that we were seeing this coming. And so I reached out to the governor, the lieutenant governor, and the Speaker of the House. I sent them this legislation.

I implored them to do the same thing in the state of Tennessee. And they balked. And now we have a situation where you’ve got James O’Keefe unveiling and having actual proof that what we were warning people about is happening.

Simon: I can tell you why they balked. And that’s really horrible. The reason they balked is so many of our politicians are being fed money by Facebook and everybody.

Simon: So they’re bought and paid for, and we’re all headed to be Communist Chinese, not good Chinese. So it’s a very bad situation. And the governor ought to straighten up and fly right as the song goes.

Leahy: So here’s the actual quote. Based on the vaccine hesitancy score, we will demote or leave the comment alone one whistleblower at Facebook said.’ Unbelievable. So if you have a good vaccine, hesitancy score that is that you’re not hesitant to take the vaccine they’ll leave it alone.

Leahy: Like Senator Rand Paul. Senator Rand Paul has made the personal decision that he’s not going to take the vaccine. And so they will demote any of his comments at Facebook using this algorithm.

Ogles: Well, I think a lot of us suspected that Facebook was doing this, but now you have quantifiable proof that they are doing it. And again, either the fact that as in China that we’re being assigned a number, a score, and it is ranking our worthiness to be on their platform.

And some might say that this tech censorship bill smacks into the freedom of freedom of speech from the business perspective, but we’ve stepped in with antitrust laws to break up this type of behavior.

Leahy: Let me get the exact quote so you know exactly what happened. Fox News last night. ‘Investigative journalist James O’Keefe reacted on Hannity Monday to exclusive documents and interviews that were provided to his Project Veritas organization by two Facebook whistleblowers that purport to show the social media giant is using an algorithm to target users who disseminate messaging that runs counter to the company’s political ideology.’

O’Keefe told Hannity that Facebook initiated a beta test for the algorithm that classifies some users under two incremental tiers of what they dub vaccine hesitancy or your VH score without the user’s knowledge.

Based on that VH score, we will demote or leave the comment alone, depending upon the content within the comment. That’s what the Whistleblower said. Roger?

Simon: Speaking to what Andy said, a lot of people consider themselves a libertarian or conservative, complaining we shouldn’t be messing with private corporations. They are able to do what they want.

But no one ever conceived of private corporations like Facebook and Google Alphabet in the days that this kind of legislation was written. They are more powerful than 95 percent of nations. I would say they’re more powerful in every nation, but the USA in China.

Leahy: Roger, what’s your VH score? Has Facebook given you your score?

Simon: I’ll tell you, I’m going to be honest about it. I actually took the vaccine, and the reason I took the vaccine is I travel for work all the time and was afraid they wouldn’t let me on planes. And now I’m saying, well, I was a chicken and I did it, but my reason for doing it is probably accurate.

Leahy: Well, now I’ve taken the vaccines. My personal thing is I’m 66. I’m in that zone. The danger zone, if you will.

Leahy: My inner 46 says thank you, Roger, for that. And I looked at the evidence, and to me, there’s enough evidence to say, okay, well, it’s not going to hurt me, and it’s going to help me.

Ogles: Well, I’m in the Rand Paul camp. I’ve not gotten the vaccine. I have no intentions of getting the vaccine. And that’s my choice.

Leahy: That’s your choice, because I don’t know your personal circumstances.

Leahy: That’s for you to decide. Not for me, not for Roger and certainly not Facebook.

Simon: Well, you know, I feel sorry for it, because he won’t be able to go to Paris next year. But maybe he doesn’t want to go to Paris.

Leahy: Let me correct that. He may be able to go to Paris, Tennessee.

Ogles: Well, and let me tell you, over the next year, I plan on visiting Paris and lots of places in Tennessee, so it’s going to be a busy keep you busy.

Leahy: That’s good. But, look, this is very dangerous, very dangerous. And I do think here’s a bit of the problem. We have antitrust laws that could be used by the Department of Justice, but Merrick Garland isn’t going to use them. Nor, by the way, did Bill Barr.

Leahy: It is about the money.

Simon: I mean, that’s the scary part about it. People are so easily bought.

Ogles: Well, when going back to that quote and this VH score, what’s frightening about this or concerning is that this is a beta test of an algorithm that is going to be applied in a much broader use and broader function.

Simon: Or has been already.

Ogles: And so, again, this is just the tip of the iceberg. And again, that is why I begged the governor. I held a press conference. I sent a letter. I sent the actual piece of legislation that Florida passed and said, we’ve got to do this in Tennessee to protect freedom of speech and I got crickets.

I got nothing in response. And here we are, now we have the proof. And I hate to say it, but I told you so we saw this coming. And once again, we’ve done nothing about it.

Leahy: And that is, I think, a little bit of the problem here in Tennessee.

Simon: A little bit? It’s the biggest problem that may be facing America in the next 50 years.

Leahy: But in particular in Tennessee because Maury County in Tennessee, where our friend Andy Ogles is the Mayor there.

Simon: The one Tennessee free zone.

Leahy: It’s a bastion of freedom.

Simon: Tennessee should be a bastion of freedom. I mean, it’s one of the that’s interesting about it is being an immigrant here from California for three years now duration. I came thinking it was going to be pure red.

And actually, it’s one of the reddest states, and at the same time, the government is not as red as the people. It’s very weird situation that we have, whereas in Florida, the government seems to be more red than the people. I mean, we should be out front on these things rather than lagging behind.

Ogles: You look at the lawsuit in Texas not to get us off of this vaccine score thing from Facebook because it’s so important and it needs to be discussed, and we need to be shouting from the rooftops.

But that lawsuit against the government on election integrity. Tennessee, by the time we signed on to the amicus brief, we were like 16th or 17th, the decision had been made. The outcome was predetermined. So, again, we were following instead of leading. And we’re one of the reddest states in the country.

Simon: The politicians here should be in the front because they have nothing to lose. They got the people behind them.