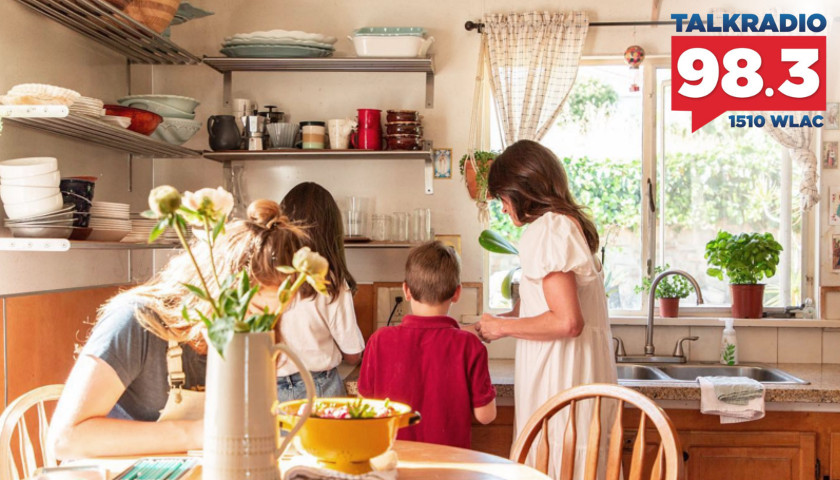 Author and Co-Creator of the Theology Home Project, Carrie Gress Talks About the Importance of Homemaking and It’s Devaluation by Radical Feminism

Live from Music Row Monday morning on The Tennessee Star Report with Michael Patrick Leahy – broadcast on Nashville’s Talk Radio 98.3 and 1510 WLAC weekdays from 5:00 a.m. to 8:00 a.m. –  host Leahy welcomed author of the Anti-Mary Exposed and co-creator of the Theology of Home project to discuss the importance of homemaking as a foretaste of heaven and its destruction by way of the radical feminist movement.

Leahy: We are delighted to welcome to our microphones on our newsmaker line a new friend, Carry Gress, a fellow at the Ethics and Public Policy Center, and author of a new book and a new project. The book on the Theology of Home. They’re actually two books and the Theology of Home II. Welcome, Carrie Gress.

Gress: Thank you. Good morning. Thanks for having me on.

Leahy: So you have a PhD from Catholic University. You’ve co-authored a book with a great Catholic theologian George Weigel. Did I pronounce that right?

Leahy: Perhaps the leading Catholic theologian of the 21st century it seems to me. But he’s a great guy from what I can tell.

Gress: He is a great guy. He’s definitely one of the best known out there, that’s for sure. It was a real privilege to write a book with him.

Leahy: So talk to us about the Theology of Home project, just announced a couple of days ago by the Ethics and Public Policy Center. Basically, we’ll focus, it says on the website, on equipping, biblically Orthodox Americans in living out the faith under the challenging new circumstances of 21st century America. What is the main point of this project, Carrie?

Gress: Well, the main point is really to look at the importance of the home. And I think this is something that we can all agree has really been decimated over the last five decades, largely because of radical feminism and just kind of the message in the air that the home doesn’t matter and that women are going to be fulfilled outside the home and not inside the home.

But we also have this amazing trend going on where the home is now incredibly popular as far as renovating them and all these home projects like knitting and cooking and things like that. So what we really want to do is just connect the dots and say these things are important and popular, not just because of the lockdowns. They were certainly making a comeback before that.

But because people recognize that there’s something important about the home and that it is a sanctuary. It’s meant to be that and it’s meant to be the place where we’re really known and nourished and loved. And it can’t be done without a homemaker. A home doesn’t make itself. My co-author Noelle Mering and I just really wanted to look at that idea and see how important this is in terms of public policy and law and all of these things, instead of it just being an invisible reality that all of us take for granted.

Leahy: Isn’t perhaps the most important element of it in the formation of the character of young children?

Gress: Oh, absolutely. I think that is so much of it. I think if you look at some of the societal ills that we have today, so many of them go back to this reality that children just haven’t been well-formed and haven’t been loved in a way that they need to be loved. And we’re really paying the price for it as a culture right now.

Leahy: From a public policy point of view, what kind of things would come out of the Theology of Home project?

Gress: Well, it’s going to be interesting to see, because nothing’s really been done like it at this point. Much of it will be writing op-eds and things like that that Noelle and I have been doing already in both Catholic and secular and Protestant outlets. But I think that we also will look at just how do we help inform people and our influencers on the Hill through workshops and things like that?

This is what typically think tanks have done. But we also like to extend it larger. We have an online magazine called Theologyofhome.com. We’d love to grow that into something that has a much further reach just to help women in particular know that it’s okay that we have these desires of the heart to have a beautiful home. It’s meant to be that way. Our home is really supposed to be a foretaste of heaven. So it’s important that we recognize that.

Gress: Well, it comes from our first book, Theology of Home: Finding the Eternal in Every Day. We really developed a mini theology related to that. But I think that what we call the domestic church really is meant to be where we can see the things that are in the home are also in the church. But we can also see them in heaven.

Things like light, nourishment, hospitality, safety, and comfort. All of these things are transcendentals that are not just meant to be at the home, but we see them again in these different ways, supernaturally. So that’s really the idea. But we also know well, what we can imagine well what hell would be like in our homes too.

Leahy: Crom Carmichael is our all-star panelist here in studio. He has a question for you.

Carmichael: Carrie, you mentioned that the radical feminists have done much to destroy the home. When you say home, I’m assuming that family is synonymous with the word home.

Carmichael: So it’s not just a physical home, it’s a family. And my sense of it is that radical feminism was not so much, it may have started with a goal to help women in the workplace, but it grew to be anti-family. Go ahead, please.

Gress: Well, I would just say I’ve actually written a whole book on the topic looking at the early second wave of feminism, and I actually think the roots were very very Marxist. I don’t think that the intention was as pure as that. And so I think that there has been an effort to destroy the family, but part of that has been destroying the actual material aspect of our homes.

Taking the woman out of the home. So the two are really synonymous. I think that you need both to really build up a family well. You can’t do that and sort of abstractly. So I think it’s important to really recognize the actual home itself and the importance of that material element.

Gress: Right. But I think that radical feminism started out with things like saying how awful it is to be a homemaker. That you have to be mentally ill, to be a homemaker, that children don’t need a homemaker, that they just raise themselves. These are the things that have been told to us for 50 years. And, of course, destroying the patriarchy as part of that. These are very old talking points that we’re still hearing 50 years later. So, yeah, I think it’s part and parcel. I think both of the things go together.

Carmichael: Right. But I guess what I’m asking you is and I think you and I are agreeing that feminism was really designed, as you say, as a Marxist tool to destroy the family rather than a tool to lift up women. In other words, they were flying under a false flag.

Gress: Absolutely. I think that is the case and I go into that in detail in my book called Anti-Mary Exposed: Rescuing the Culture from Toxic Femininity, where there are absolutely both Marxist elements as well as strong elements of the occult that we’re very much aimed at destroying the family.

Gress: Well, Big Tech came after my book, The Anti-Mary Exposed right after the inauguration actually. And both Facebook and Instagram banned it from their marketplaces. So that’s been kind of an ongoing story that’s been happening. But the actual Theology of Home books have not been touched largely because they’re very unpolemical.

We designed them to be very positive and for people to really find something or anybody to find something in them that would be edifying to them. So that we haven’t been attacked yet. And our Theologyofhome.com website has also been untouched. But of course, we have a subscriber list. We know that probably down the road we will end up just having to be a newsletter that we send out to people. So we really like to build it up that way just so we can stay in touch with people. The biggest piece has certainly been the censorship that I’ve experienced with my specific book.

Leahy: Carrie Gress, a fellow with the Ethics and Public Policy Center and co-author of books about the Theology of Home. Now, the Theology of Home projects. You can go to Theologyofhome.com to learn more. Carrie, thanks so much for joining us. And please, come back.

Gress: Thank you. I love it. Thanks so much.

Leahy: All right, now that was interesting.

Carmichael: That was very interesting. I really enjoyed that.

Leahy: Yeah, well, we try to keep it interesting here.

Tune in weekdays from 5:00 – 8:00 a.m. to the Tennessee Star Report with Michael Patrick Leahy on Talk Radio 98.3 FM WLAC 1510. Listen online at iHeart Radio.
Photo “Making a Home” by Theology of Home.