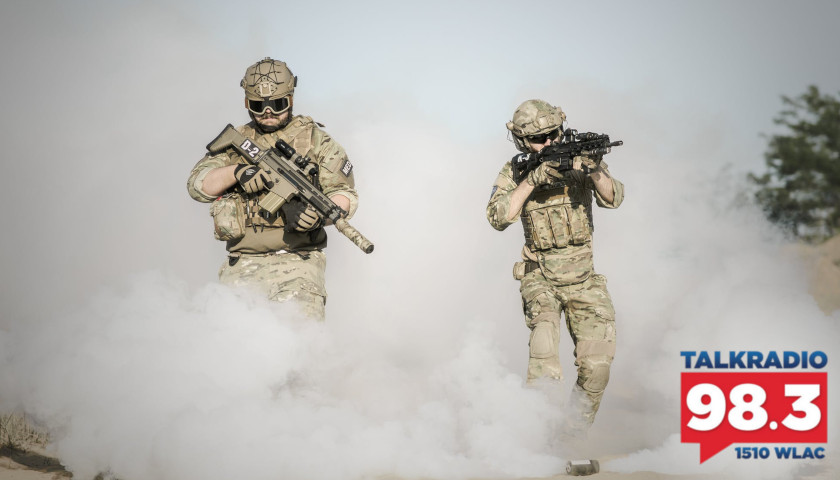 Live from Music Row Thursday morning on The Tennessee Star Report with Michael Patrick Leahy – broadcast on Nashville’s Talk Radio 98.3 and 1510 WLAC weekdays from 5:00 a.m. to 8:00 a.m. –  host Leahy welcomed author and The Washington Times correspondent on national security Bill Gertz to the newsmakers line to discuss Biden’s recent decision to leave Afghanistan, the U.S military, and the continued threat of China.

Leahy: We are joined on a newsmaker line, our good friend, Bill Gertz the well-known Washington columnist, an expert on National security, and an expert on China. Good morning, Bill.

Gertz: Hi. Good to be on the show.

Gertz: Well, it’s still a work in progress. They’re kind of getting their people in positions. They’ve got Tony Blinken the Secretary of State is kind of leading the foreign policy effort there Lloyd Austin at the Pentagon. I think it’s they’re battling now. The agenda is not so much between Democrats and Republicans, but between Liberal Democrats and radical Democrats in terms of policy fights.

Leahy: The big news foreign policy-wise yesterday was President Biden’s announcement that the United States will be withdrawing entirely from Afghanistan. We’ve been there almost 20 years now, I guess 18 years. It’s not seemed to of made much progress. But is this a wise move? Will it create a power void in that area?

Gertz: Well, I think this is going to pit the political leadership and the Biden administration against the military. The military’s view is that we’re not done. We can’t leave now because the threat posed by the Taliban remains. I think it’s the right choice. I mean, if you’re not winning, you’re losing and they’ve been losing there. We don’t have a department of nation-building in the U.S government.

And the military, their job is to fight and win wars. You’ve got a low-level insurgency now. The Taliban controls quite a bit of territory in Afghanistan. So timing the departure to September 11th, though it may not be a good idea because it’s going to give the enemy a chance to just delay things and really step up its activities.

It’s not looking good for Afghanistan I can tell you that. The government there, I think it’s got problems with corruption and problems with governance. Afghanistan is not really a nation. It’s a bunch of tribes that are often fighting. And now you’ve got the Taliban to deal with. It’s a terrorist organization.

Leahy: What about the symbolism of selecting September 11th as a day to leave? That struck me as an odd choice by the Biden administration.

Gertz: Yes. I don’t know where that came from, but again, certainly, 9/11 was one of the reasons we went in there because Al Qaeda had managed to operate from redoubts within Afghanistan. There are still terrorist groups there. ISIS is there and Al Qaeda’s there. But according to the latest intelligence assessment that was just released this week by the office of the Director of National Intelligence, the terrorist threat is there, but it’s been degraded significantly by years of U.S military activities. A lot of our special operations people have been doing excellent work and really making the terrorist threat diminished.

Leahy: Is the Biden administration’s decision to leave Afghanistan, is that any different than what President Trump would have done had he been reelected?

Gert: Yeah. President Trump had tried to do that and kind of ran into opposition from the military leadership. The military’s view on it is basically no military leader wants to be the last one to say, hey, we didn’t win. And we’ve spent a lot of treasure and lives trying to solve this problem of Afghanistan. I think pretty much Trump definitely was trying to get out and the military push back. I think it was General Mattis when he was the Secretary of Defense. He quit in protest over the decision to pull out of Syria, where we have special ops people working there.

Leahy: In retrospect, was that war ever winnable?

Gertz: Well, I guess it was if there was a way to establish a stable Afghan government. And again, we spent trillions of dollars trying to do that. And yet it’s just a really difficult problem. Nation-building is not easy to do.

Leahy: Absolutely. Let me ask you this question about the difference between state and defense now. So we had Mike Pompeo, very powerful. I thought he was very much aligned with President Trump’s policies. And now we have this fellow who’s last name is Blinken. Tony Blinken. So he doesn’t seem to be a very powerful figure. He seems to be kind of a return to, I don’t know Jimmy Carter type foreign policy. Am I giving the guy a short trip there? Is there more to him than that?

Gertz: I don’t really know him, but I do know his background. He’s basically a Senate staffer, so he doesn’t bring a lot of vision and a lot of individual thought and strategy to the position. As you mentioned, I think Mike Pompeo is one of the best Secretaries of State that the U.S has had, especially when it comes to China.

He did groundbreaking work in really reorienting the entire U.S government position on dealing with the threat from China. Tony Blinken has inherited that and hasn’t really moved to change it. Again he’s adopting a lot of the Liberal left policies and climate change and personnel diversity. I don’t know how that’s going to affect American foreign policy.

It’s kind of one of those political issues, but so far, he has done pretty well on the China threat. And one thing I would give him credit for was he did not back down from the legal designation by the State Department of genocide by China of the ethnic Uhygers in the Western part of China. And I think I’d give him credit for that.

Leahy: I’m trying to figure out what on earth is going on at the top levels of the Department of Defense. The way it’s operating seems to me to be so woke, so progressive, so interested in equity and diversity and so disinterested in winning wars. This is just my view. What’s the story with Lloyd Austin, the new Secretary of Defense?

Gertz: Yeah, he’s basically following the Biden plan which is the new issue that the Pentagon is doing. They did what they call a stand down on extremism in the military. This is really a red herring issue. There’s not a lot of extremists. There may be a very small percentage of people, but it’s not a big problem and yet they’ve tried to make it a huge problem.

And they forced every military and defense component in the Defense Department to do a so-called stand down on extremism which is ill-defined. They haven’t defined it. And it looks to a lot of critics, I included, that this is some kind of a political purge to try and politicize the military, which has traditionally been a very conservative institution.