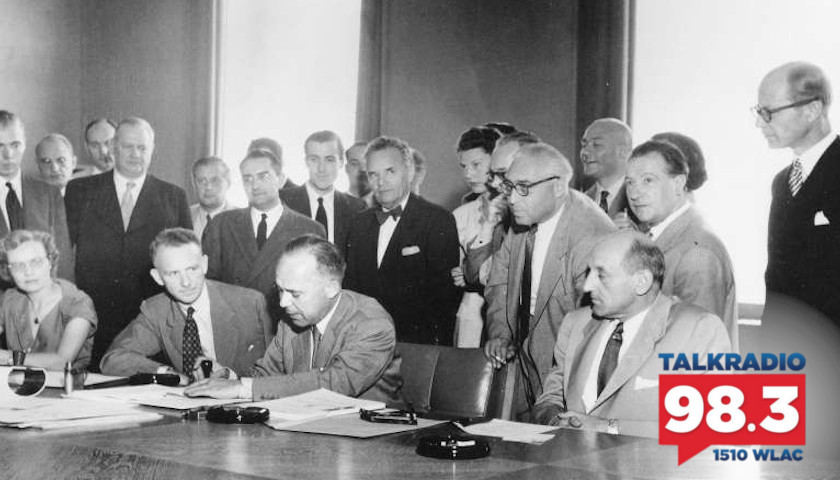 Live from Music Row Thursday morning on The Tennessee Star Report with Michael Patrick Leahy – broadcast on Nashville’s Talk Radio 98.3 and 1510 WLAC weekdays from 5:00 a.m. to 8:00 a.m. – host Leahy welcomed Executive Director of the Center for Immigration Studies Mark Krikorian to the newsmaker line to discuss his recent call for the withdrawal of the United States from the decades-old 1951 Refugee Convention and its 1967 protocol as the southern border leaks more than Latin American refugees.

Leahy: We are joined now on our newsmaker line by our very good friend, Mark Krikorian, the executive director of the Center for Immigration Studies. Mark, welcome and thank you, thank you.

Thank you for writing your very important article at the National Review Online. Time to Withdraw from the UN Refugee Treaty. Thanks so much. It’s about time, isn’t it?

Krikorian: Oh, yeah, absolutely. Because we’re talking about a lot of loopholes in the law, and how are we going to, you know, sort of nip here and tuck there. But you got to go to the root of the problem which is that we are subject, we signed a treaty 70 years ago.

This is a lifetime ago. A UN treaty on refugees. But it was written in – the terms of it are based on post World War II and the beginning of the Cold War conditions. That’s a world that no longer exists. And yet we have signed the treaty.

We signed the sequel to it, but it doesn’t matter. We’re still subject to its terms, and we incorporated them into our law. And the main problem here is not refugees that we go and pick and resettle in the U.S. That’s a problem.

The real problem with this treaty is that it sets up asylum law as well. Which are illegal immigrants coming into the U.S., sneaking in, overstaying a visa, whatever it is, and then saying, you have to let me stay because of the terms of this refugee treaty.

And that’s what we need to fix because if we don’t, we don’t have control over our own borders. Basically, the rest of our immigration laws are irrelevant. If illegal immigrants can just hop over and say, you have to let me stay, I don’t really care what your immigration law is.

Leahy: This treaty was the 1951 United Nations Convention relating to the status of refugees. President Harry Truman in 1951 did not sign that because he felt it infringed on U.S. sovereignty. This is from your article.

In 1968, Lyndon Johnson reversed course and signed the protocol, and the Senate ratified it, binding the U.S. to its terms. The provisions were formally incorporated into a U.S. statute called the Refugee Act of 1980. But you say in your article, Truman was right not to sign it.

Krikorian: Truman was right because he chose not to sign it at the time – 1951 – because he viewed it as infringements or provisions of it as an infringement on U.S. sovereignty. And we resettled refugees between Truman’s decision and then LBJ’s getting us into that treaty, with Congress, passed legislation.

And we did it on our own decision. What happened in 1968 is we bound ourselves to these asylum provisions. But even then, it didn’t make that much difference because, how many people were sneaking across our borders and then saying political asylum in 1968?

It wasn’t seen as a problem – was only when the Cold War ended and transportation and communications around the world became dirt cheap, relatively speaking, and easy and quick. So now, instead of one ballerina from the Soviet Union defecting – which is what asylum is for, defections.

Now we’ve got 200,000 people a month coming across our Mexican border. Not from Mexico or Central America, but from Uzbekistan, Mauritania, Romania, and you name it. We got people coming from all over the world and saying, oh, I fear return. You have to let me stay and let me stay as a refugee.

And Europe faces the same problem. But you know, that’s their problem. They need to deal with it, too. We need to deal with our own problems. And that is not that we’re never going to give asylum to anybody, but that we need to set asylum rules based on the national interest. Based on what’s good for the United States and not based on some UN treaty.

Leahy: Mark, you reference in your outstanding article at National Review Online, a book written in 2011 by John Fonte called Sovereignty or Submission, which is about the struggle between national sovereignty and global governance. Now, I guess, was prophetic. The past 10 years have not been so great for American sovereignty.

Krikorian: No, definitely not. And this book, Sovereignty or Submission, deals with a whole bunch of things. It’s not about immigration. My point was that this issue of refugees and asylum fit into that broader push by these mainly left-leaning groups that see themselves not as citizens of their country.

Not as American groups or French or German or British organizations. And the people in them don’t think of themselves that way. They think of themselves as citizens of the world and they want there to be more and more rules that countries have to follow, whether their people like it or not.

Globalism is kind of the shorthand we use. This refugee treaty is an important part of that globalism push because the point of it is to limit more and more the control a country has and therefore the people of that country have over their own borders.

Because if there are rules set by the UN about who you can deport, who you are legally required to let stay in your country, even if you didn’t choose it, even if they came against you without your consent, then you progressively lose sovereignty over your own borders.

Leahy: I agree with your suggestion that we withdraw from the UN refugee treaty immediately. Let’s talk about the politics of this. What’s the likelihood that in the current Congress that a proposal like this would have any chance of success?

Krikorian: First of all, it’s the president, whoever the president is can withdraw us from a treaty. The way a treaty works is that the president and the people who work for him sign a treaty, negotiate and sign it, and then the Senate has to ratify it.

Okay it or not. If they do that, it becomes law of the land according to the Constitution. The president can then back out of the treaty on his own. He doesn’t need a vote for that. President Trump, for instance, and I’m pretty sure President Bush got us out of a couple of treaties because all treaties have a provision that says, if you want to get out of it, you have to send us a notice.

And then however much time, in this case, one year later, you’re then free of the treaty. Obviously, (Chuckles) President Biden is not going to be pulling us out of the treaty. So this is something that would have to wait until we had a President who was not just more in touch with his surroundings, but just generally speaking, ideologically and politically, very different.

Maybe, hypothetically, a President DeSantis might do something like that. But even then, it’s the necessary first step. But even then, just getting out of the treaty doesn’t free us from the UN provisions. We have to then change the legislation, the law, and that’s something Congress will have to do.

You’ll have to see what the makeup of Congress is at some point. It’s certainly not going to happen with a Democratic majority. It won’t happen immediately with the Republican majority potentially either, because this is one of the reasons I wrote the article.

And that is that no Republican politicians have submitted changes, proposed changes to the refugee law. So this is a discussion that I’m trying to move along. And this kind of, you’re addressing the issue on your show is one step in that direction.

Leahy: We’re talking with Mark Krikorian, the executive director of the Center for Immigration Studies. Mark, can you stay with us because when you come back, I’m going to ask the big question about the politics and your outstanding proposal that the United States should withdraw from the United Nations Convention relating to the status of refugees. Can you stick with us through the break?

Krikorian: Sure. I’d be happy too. Thank you.