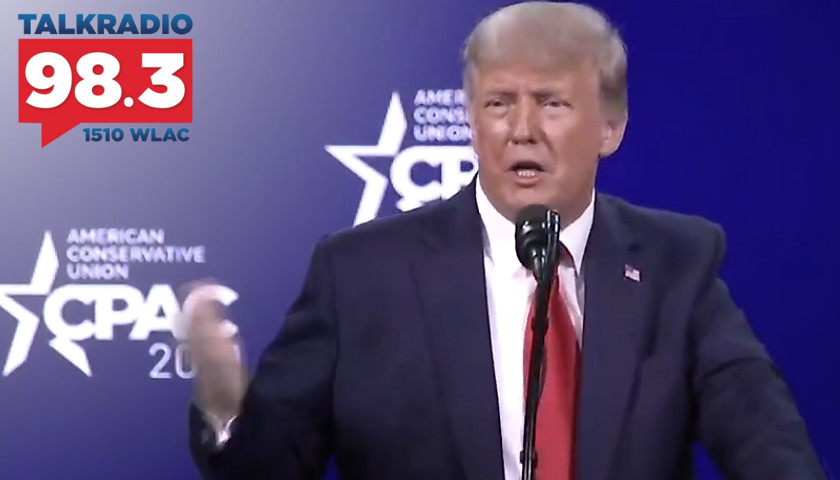 Live from Music Row Monday morning on The Tennessee Star Report with Michael Patrick Leahy – broadcast on Nashville’s Talk Radio 98.3 and 1510 WLAC weekdays from 5:00 a.m. to 8:00 a.m. –  host Leahy welcomed the original all-star panelist Crom Carmichael to the studio to discuss the cancel cultures looming boomerang effect on Democrats and Trump as the official leader of the Republican Party.

Leahy: Well over the weekend Donald Trump made a little bit of news. He spoke at CPAC.

Leahy: And by the way, just as an aside. So the Hyatt Hotels hosted CPAC and now all the Democrats are trying to do a boycott of Hyatt Hotels. Hyatt responded, ‘tough!’ (Laughs) I like that. ‘We believe in diversity of thought.’

Carmichael: Which hotel chain is Pritzker’s? The governor of Illinois.

Carmichael: Maybe he’s not associated with it anymore.

Leahy: It sold off.

Carmichael: But let me say this you can do something for a certain period of time like this cancel culture. The cancel culture is going to soon come back and bite the people who are trying to run it. It’s going to bite them in the butt because it’s wrong. It is fundamentally wrong. And let me say this. It is anti-American.

Carmichael: It is anti-American. Forget the Constitution for a second. I’m talking about our nature. Our nature is to discuss and to disagree and to come to conclusions after a full debate. That’s what our nature is as a country. And the left hates that. They want to be in control. It’s really kind of interesting. And by the way, Biden’s one point nine trillion dollar so-called coronavirus package is exactly what I’m talking about here.

Leahy: You are right as always about the ownership of the Hyatt hotel chain. It is the Pritzker family. J.B. Pritzker inherited a lot of money, is part of that family, but it looks like he’s the first cousin or second cousin to the guys that are running it right now. So not involved in the operation of it.

Carmichael: Well, but I mean he may not be involved in it, but financially he is still part of it it sounds like.

Carmichael: So he’s a little conflicted.

Carmichael: He’s going to be conflicted. But if we can if we continue on here. You have you had this one point nine trillion dollars and let here’s where the biggest for these. The biggest chunks are going. They’re going to the teachers’ unions who are going to be rewarded ultimately for not doing their job now. Think about that for a second. you’re going to get billions and billions of dollars for not doing your job unless it turns out that your job is to make sure that Black and Hispanic children do not get a quality education.

Leahy: Well the other element of the teachers union jobs is to present and indoctrinate a left-wing anti-American ideology to K-12 students.

Leahy: When they are in a class that’s one of the things they’re doing.

Carmichael: Yeah, but I’m talking about what they’re actually doing now. Then you had the blue states and their pension plans which are completely underwater. We’re talking hundreds of billions of dollars underwater from irresponsible management and over-generous payouts. And then you have the private sector unions it turns out. Private sector unions have had these industry groups like the Trucker’s Association is actually one giant pension of 400,000 people all across these states and all these different companies.

And so it’s not just one company. and these companies are underfunding their unions. And the reason they’re being underfunded is well, I take that back. They’re not really being underfunded the plans are being mismanaged. The returns on the plans over the last 15 years have been less than five percent a year. They projected to be in the eight to nine percent range if they had hit their projections.

Which they should have by the way if they were properly managed and if they had then they would be funded. You have these cronies who are put in charge of managing the pension funds. And they then abuse that responsibility and then Democrats turn around to the taxpayers the non-union members and say pony up you have to make good for the mistakes of our side.

Carmichael: Yes. What this is an organized crime done ‘legally’. And I put legally in quotes and it dwarfs it. I mean organized crime is a five billion dollar a year industry maybe. I’m just picking a number here. This is 90 percent of one point nine trillion. And then Biden’s coming in with another package right behind it. Now, here’s why this all ties into Trump’s speech. Trump is now back. There about four or five Democrats in the Senate who know that if they vote for this one-point-nine trillion-dollar package they will likely lose their next election.

Leahy: Now you can understand why I said Joe Sinema because we’re in the land of transgender.

Leahy: I kind of call him a communist with a crew cut. (Chuckles)

Carmichael: But he’s not one of us but he’s going to be stuck. And then Sherrod Brown. Sherrod Brown is a lefty but he’s in a state that’s now pretty solidly red.

Carmichael: Is that when he’s up.

Carmichael: But all of these all of these Senators have to look out. If they just got re-elected in 2020, then they’re not up until 2026.

Carmichael: They have lots of maneuvering lots of wiggle room.

Leahy: There will be a presidential in between.

Carmichael: And Trump is the leader of the Republican Party.

Carmichael: There’s not anyone who’s even in the league.

Leahy: If he runs for a non-consecutive second term. Thank you, Grover Cleveland.

Carmichael: There you are. Here’s what’s interesting about this. Trump is such a leader of the party. And by the way, he will be enormously effective in 2022.

Carmichael: Out campaigning for candidates.

Leahy: Already in Ohio, he’s endorsed a guy who’s running against this squishy Anthony Gonzalez who voted to impeach him. Gonzales is gone. Gonzalez will be defeated in 2022 in the House. And he’s already going to be weighing-in on these issues.

Carmichael: Alright and so has he endorsed somebody in Ohio?

Leahy: Yeah, this Max Miller, who was a former aide to him.

Carmichael: For the Senate?

Leahy: No, no. For the House seat that Gonzales has. He’s not endorsed for the Senate. He probably won’t for a while.

Carmichael: Well at any rate though, what I’m saying is is he’ll be out and he will campaign against those who voted to impeach him. And frankly well he should. And he will be very effective I believe in helping Republicans retake control of the House. And if and if he does do that, then he won’t have to announce that he’s running in 2024.

Leahy: There will be a groundswell for him.

Carmichael: Until he decides that he wants to because you can be an almost candidate and do a whole bunch of things legally that once you announce, it changes.

Leahy: Max Miller is the guy in Ohio that Trump just endorsed.