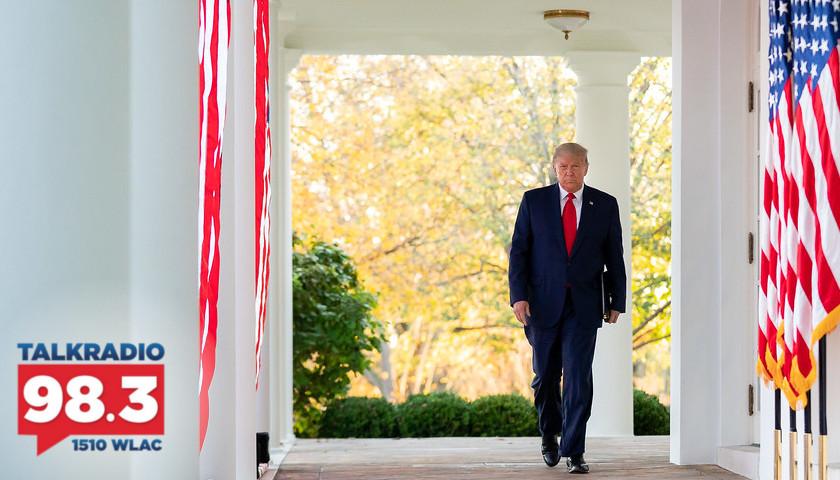 Live from Music Row Friday morning on The Tennessee Star Report with Michael Patrick Leahy – broadcast on Nashville’s Talk Radio 98.3 and 1510 WLAC weekdays from 5:00 a.m. to 8:00 a.m. –  host Leahy welcomed former Deputy Asst. Secretary for Content in the Trump administration and director of the new documentary film The Plot Against the President Amanda Milius to the newsmakers line to discuss her role, background, and motivation behind the movie.

Leahy: We are joined now on our newsmaker line by Amanda Milius who is the director of a documentary released just recently called The Plot Against the President. Good morning Amanda.

Leahy: So Amanda, tell us a little bit about how this documentary came about. It was a book written by Lee Smith who’s currently with the Hudson Institute. How many documentary films have you made and how did you decide to make this particular film?

Milius: Well, actually I haven’t made any other documentary films before. I went to USC film school and I worked in film for many years. But I had always envisioned that I would narrative scripted. I hadn’t thought that documentary would be my thing. And I actually kind of abandoned filmmaking entirely when I went to go work for the Trump administration because that’s not exactly something you do if you want to be really popular in Hollywood.

Leahy: So let me ask you this. Tell me how you came about getting a job and working with the Trump administration.

Milius: Well, I just got really interested in politics in 2016 and I volunteered for the campaign in Nevada. I’m from Los Angeles. So I just met everybody there and got pulled into it. I worked at the State Department for three years and worked at the White House for six months. And then I resigned to make the movie early in 2020.

Leahy: What was your job at the State Department Amanda?

Milius: By the end, I was the Deputy Assistant Secretary for Content which is a unique position. We do foreign messaging for foreign audiences like explaining American foreign policy to the world.

Leahy: Interesting. So you followed all the controversy with Radio Free Europe, etc, and all the board members.

Milius: Actually I was on the board.

Leahy: Were you on the board with Roger Simon briefly?

Leahy: You were the part of the group that was named to the board for a few days and then President Biden said, goodbye and good luck. Where you part of that?

Milius: I was and I’m good friends with some of the folks that Michael Pack had put in as presidents of the various organizations. Particularly Victoria Coates. I think she’s great. She would have been the head of Middle East broadcasting. It’s a real shame what happened and frankly, it’s legally questionable. It definitely breaks the law. So we’ll see what happens with that.

Leahy: By the way, Roger Simon is a is an old friend of mine. He was my former boss back in 2009 when he ran Pajamas Media and PJTV out of Los Angeles. I did an internet television program for a while about the Tea Party. Roger is no longer affiliated with Pajamas Media, which he founded. He moved two years ago to Nashville where I live and where this show is broadcast from. And he’s a senior political columnist now for The Epoch Times and an all-star panelist here on The Tennessee Star Report. Every other Tuesday he’s in the studio with me.

Milius: Oh, that’s amazing. He was my board friend for a very brief period of time. We’ll see what happens with that.

Leahy: Let me just go back to your pedigree. For those in our listening audience, it is a big deal to be a Deputy Assistant Secretary of State. This is not an insignificant job. You said you went to Southern Cal film school?

Milius: Yes. USC School of Cinematic Arts before I joined the administration.

Leahy: Good. Good. That’s where they all want to go. Steven Spielberg wanted to go there and they wouldn’t let him in way back when.

Milius: (Chuckles) Yes. Then he bought the school.

Milius: I love that. That’s a great attitude.

Leahy: They wouldn’t let me in so I bought the school after I became a great success. Did you go to the White House after the State Department?

Milius: Yes. I mean I kind of went there and I was sent on detail for six months. I was really a State Department employee and presidential political appointee. But they move us around. It’s not that uncommon because the White House has very few staff. So a lot of times you get people detailed over from other agencies.

Leahy: What did you do for six months and were you based in the White House itself or in the old executive office building? That looming gray building across the street?

Milius: Yeah. I was in the gray building. I’m pretty fond of EEOB. I was working actually in Jared Kushner’s Office of American Innovation which held a lot of different projects. And the thing I was working on, in particular, was immigration communications related.

Leahy: That’s pretty high-profile stuff you were working on there Amanda.

Leahy: We’ve seen over the last month just how bad that is. It’s just terrible. Let me just talk about one aspect of your documentary that caught my attention and then we can get into the main elements of it. The music was provided by Stephen N. Limbaugh, Jr. I believe he is a former federal judge and the first cousin of Rush Limbaugh. Is that true?

Milius: I think that’s his son.

Milius: It’s his son, not a nephew. The Limbaugh family is very talented. I feel like we’ve got a couple of good conservatives and creative family over on the west coast. We’ve got that because the Milius’s and the Limbaugh’s working together.

Milius: I didn’t spend much time with the secretary because my role was more on the press side of things. He would be pulled into the press stuff with the daily grind with dealing with reporters and all that stuff. My section was really more kind of like long-form content. But I’ve worked with him and he’s great. I really got to run my own shop, which was very nice. I just actually got to kind of do my own thing.

Milius: Yeah, significantly. I mean Tillerson was a disaster. I can just tell you that. A lot of the people that he insisted on hiring that were not campaign people especially ones that ended up staying on afterwards were really destructive to the Trump agenda. I think if Tillerson had stayed in we would not have accomplished any of the foreign policy accomplishments that we did. He didn’t think we could have moved the embassy to Jerusalem for eight years. Which is absurd. And we did it in like the next year. (Leahy chuckles) He wasn’t the right fit. And the president figured that out and made a change. I’m glad that that happened.

Leahy: Tell us now how the idea of doing this documentary came about. So you’re back in the State Department and you are the Deputy Assistant Secretary of State for content. How do you go about deciding I’m going to make this documentary?

Milius: Well, actually I had been approached by two other friends of mine in the administration who were working in the White House who knew about Lee Smith’s manuscript before it came out because they had provided some guidance to him about what would have gone on. And I’m kind of friends with a lot of the people that are either mentioned or appeared in the movie. You just sort of work alongside folks and get to know them.

And my friends approached me and they were like, we’ve got to buy this book. You’re from Hollywood, you know how to do that. Let’s form a partnership and do this. And then about two weeks later I was like, yeah, we can do that. Let’s talk to the author. I’ll call a couple of people that know how to make these deals and let’s put it together. And then probably two weeks later there were like, oh by the way, we think you should make it and you’ve got to resign.

And you’re going to be the one that has to leave the administration and do it but you’ve got to do it. And I’m like wait a second, I was like, what if I like my very regular government job? Who said I wanted to do films again? But it was the right thing to do and I realized that.

I had friends that I’d talk to that said you could stay in the government for another year and beat your head against the wall trying to change one minor sentence in a UN statement or something. You know trying against the blob to win or you could go and make a movie that would actually change people’s minds about history.