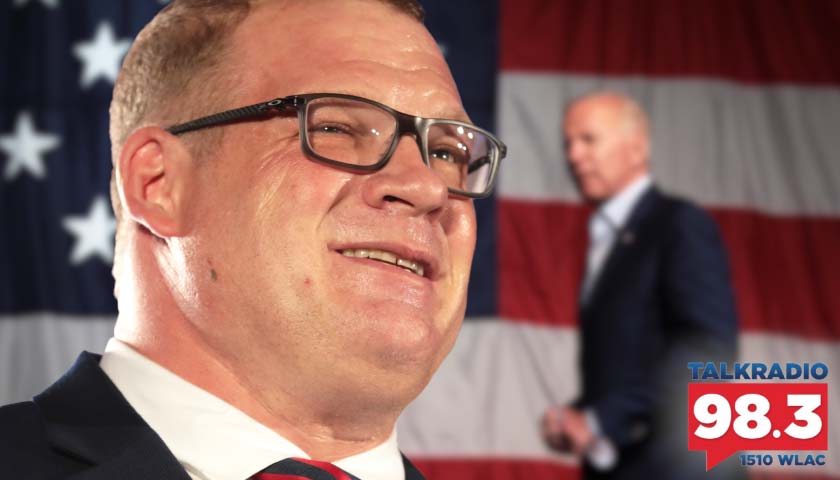 Knox County Mayor Glenn Jacobs: ‘The Idea That the President Is Just Making Laws on His Own Should Really Bother Everyone’

Live from Music Row Monday morning on The Tennessee Star Report with Michael Patrick Leahy – broadcast on Nashville’s Talk Radio 98.3 and 1510 WLAC weekdays from 5:00 a.m. to 8:00 a.m. – host Leahy welcomed Knox County Mayor Glenn Jacobs to the newsmaker line to discuss his recent letter to President Joe Biden in response to the vaccine mandates that infringe on American’s freedom and liberty.

Leahy: We are joined now by the Mayor of Knox County, our very good friend, Glenn Jacobs, who broke some news on Thursday with us at The Tennessee Star. Headline. Knox County will not Comply with Joe Biden’s COVID-19 Mandate. Welcome to The Tennessee Star Report Mayor Jacobs.

Jacobs: Morning, Michael. Thanks for having me on.

Leahy: We always are glad to have you on here. You are always interesting, entertaining, and a supporter of liberty, which we love here on The Tennessee Star Report. So tell us what you told President Biden and what’s happened since you put that out.

Jacobs: Sure. Well, first of all, it’s ironic because this morning I’m actually on my way to read to an elementary school about the United States Constitution. I’m wondering if President Biden is going to be there because he can certainly use a primer himself. (Leahy laughs)

I understand he’s vacationing at the beach in Delaware, so probably not. But last week I read a letter to President Biden about his vaccine mandate that he was implementing through an emergency rule with OSHA and the Department of Labor.

I feel many other folks do as well that something of this magnitude impacts so many people, this is not just like saying, hey, your toilet can only use so much water or some of the other kind of ludicrous things that the federal government does.

This is a big deal. And it’s going to impact tens of millions of people. And I believe that it requires literally an act of Congress. It should have been a legislative action instead of the President just signing a decree and making it the law of land. And like many other folks, I have a lot of issues with that.

I also have issues with the President saying this is not about freedom. It’s always about freedom in the United States. He took an oath to uphold the Constitution just like I did that is what the Constitution is therefore really. To protect the Liberty of the American people. And it just really bothers me when politicians forget about that.

Leahy: Yes.  And in your letter, you were direct and you said this. You said finally, as an American, I’m appalled President Biden by your statement, ‘this is not about freedom or personal choice.’ On the contrary, you Glenn Jacobs, Mayor of Knox County write, in America, it is always about freedom. I like that line.

Jacobs: Thank you. But, I mean, it is and that’s what separates us from the rest of the world. We’re a nation founded on the idea that individuals have God-given rights. The government’s job is first and foremost to protect those God-given rights, not to trample all over them.

And we have processes in place that are designed to make that happen. The whole idea is that we give up a little bit of our freedom and our liberty in order for the government to have laws that can make society work in civilization work. That’s government’s primary job.

And that’s certainly the federal government’s primary job. It’s not to micromanage our lives. And President Biden might think it’s a good idea and thinks that everybody should get vaccinated.

Leahy: Yes. And not a good King. A bad King. You close your letter, Glenn Jacobs, to President Biden. You say the following, ‘In Knox County, we know what we stand for. We stand for freedom.

We stand for the rule of law, we stand for the Constitution. And you, Mr. President, can rest assured that we will stand against your blatant and egregious executive overreach.’ What has the President said in response to that letter?

Jacobs: (Laughs) The President hasn’t said anything. I don’t know if he’ll actually read it. We did send him a hard copy. We also sent it to the Department of Intergovernmental Affairs. I’ll share something else with you, Michael.

When President Trump was President, even though the President didn’t speak directly to the counties, there was a lot of communication with the counties. We actually went up to Washington, D.C., and met the folks at the Department of Intergovernmental Affairs.

The day that we were there, the Secretary of Agriculture spoke. This was county executives, staff, and commissioners from three states in the Southeast. And we were all invited to Washington and see kind of how things work up there.

And there were constant updates from the Office of Intergovernmental Affairs specifically to my office. I’ve heard nothing from the Biden administration. I don’t know what other county mayors and county executives are seeing, but President Trump, for all the criticism that he got from a lot of people one of his initiatives was to have communications with the counties, because in the end, the counties and the cities, you know we are the ones on the front lines in many cases.

And President Trump was very good about that. President Biden has done nothing in his administration that I know of up to this point. But he hasn’t said anything. Of course, there’s been a lot of reactions, both positive and negative from other people.

Leahy: Tell me about some of the negative reactions to this letter from other people.

Jacobs: Of course it’s simple partisanship at this point, and that’s the problem overall now, with where this country is going. COVID-19 is a public health crisis, but it’s morphed into a political issue as well. It’s been completely politicized.

What’s really scary is no matter where you are in the political spectrum, the idea that the President is just making laws on his own should really bother everyone. I don’t care if you are liberal or conservative.

This is a theme that we’re seeing about the Biden administration. I call it the ‘Biden Bigfooting’ problem. They basically are bigfooting everybody’s counties and state governments that don’t agree with them. Foreign countries like France.

This is very troubling to me and I think this is an indication that the Biden administration doesn’t care and is attempting to exercise absolute power over everyone else. What are your thoughts?

Jacobs: I do not disagree with you. I think for the Biden administration, everything’s political. I think this vaccine mandate was actually designed to get other things off the front page. Look at the debacle in Afghanistan.

We look at the crisis on the border. The FAA just ordered no drone flights over the Southern border in places so that the news can’t get up there and see what’s going on. I absolutely don’t disagree with you at all.

Jacobs: Exactly. It seems to me that there’s a lot of strong-arm politicking going on. If you don’t like what the administration is doing, they shut you down. Of course, we see this on social media as well, not from them, but from the kind of gatekeepers of social media. There’s no free discourse anymore. If they don’t like what you’re saying, they shut you down. But I agree with you on that.

Leahy: You told us you were literally in the car on the way to meet with some elementary school kids to talk about the Constitution?

And I believe that that’s what makes America an exceptional country is the idea that we have a government that’s there to protect our rights as opposed to one that uses us as a resource.

Leahy: Always entertaining, always enlightening. Thanks so much for joining us today. Come back again soon, if you would, please.

Jacobs: Yes, I sure will. Thank you so much.