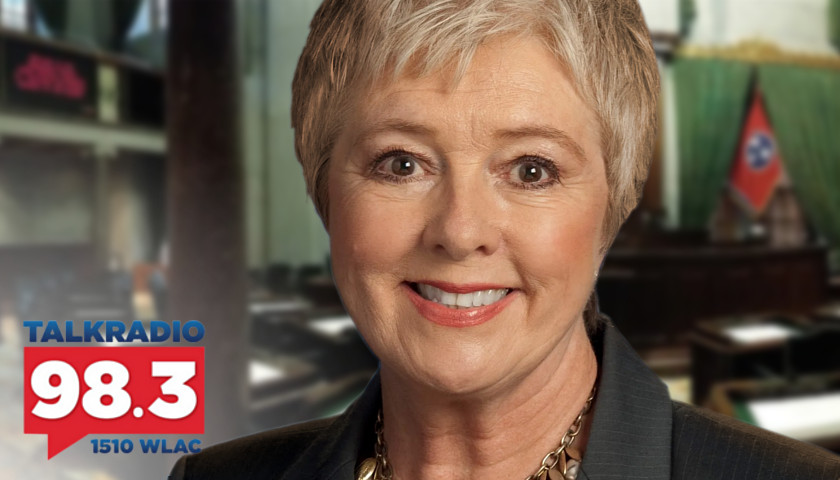 Live from Music Row Monday morning on The Tennessee Star Report with Michael Patrick Leahy – broadcast on Nashville’s Talk Radio 98.3 and 1510 WLAC weekdays from 5:00 a.m. to 8:00 a.m. –  host Leahy welcomed (TN-16) Senator Janice Bowling to the newsmakers line to discuss her priorities in the current session with common-sense bills that she’s passed and continues to work towards.

Leahy: We are joined now on our newsmaker line by our good friend, State Senator Janice Bowling from Tullahoma. Good morning, Senator Bowling.

Bowling: Good morning, Michael. How are you in Nashville?

Leahy: Well, we’re delighted that we have this time to chat with you. Very busy time in the Tennessee General Assembly. You’ve been pretty busy at it as well. Tell us what your priorities are and how they’re doing so far.

Bowling: Well, I’ve had several priorities with this session, and one was to get the bill passed that allows for the burial of the human remains of a child after an abortion. And that sounds like, my goodness, what were they doing prior to now? But that legislation has passed out of committee very handily. And hopefully we will get that on the floor and that will be passed in Tennessee. There had been no regulatory oversight for that. And even though we had regulatory oversight for veterinarians on what to do with animals, we had nothing for the human remains, even abortion.

Leahy: That sounds like common sense legislation to me, Senator Bowling.

Bowling: It really was common decency, common sense. I think it was Supreme Court Justice Thomas and his talk with the majority when it was approved by the U.S. Supreme Court that he said the insane thing is that we would have to be even discussing that this would take place and would be appropriate to take place.

Bowling: So do I. I really admire him so much. And then another bill that I’ve carried now for multiple years, Michael, is the expansion of fiber to the premises in Tennessee, particularly in rural Tennessee. Fiber to the premises. And at one time I said high-speed Internet. But then you get into discussions with all of the providers about what constitutes high-speed Internet.

And they were trying to say 10 megs down and three megs up. Well, you need symmetrical these days. You’ve got to have upload and download speeds. The only thing that really gives you symmetry is fiber. So rather than trying to argue the points that 10 megs down and three megs up is more like a tom tom drum or kerosene lantern that you waive in the window it’s really not appropriate for 21st century needs.

I just left off anything that said broadband and went straight to fiber to the premises because, with that, you can stream videos. You can do voice over Internet. You will have more than adequate bandwidth and speed for everything. And it’s really 80 percent of your cost is going to be in the installation of the product. So go ahead and put in what’s future proof. You don’t need radio waves in rural Tennessee. Hills, hollers, trees, and weather, those things all interrupt. Plus they’re not secure. So that was one thing. And I did get four votes in committee this year.

Bowling: 1937. You are exactly correct. And what some of my colleagues say incorrectly, in my opinion, is that you’re trying to interfere with the free market. Well, I would submit to you that when a company has regulatory protection and has tax subsidies, which is what the legacy providers, as they call them have and they’ve gotten the benefits of universal tax since the 1990s.

About five years ago, one of the largest providers had received over nine billion dollars of tax subsidy in order to expand broadband into rural America. And one of the providers gets $500,000. a month from Tennesseeans to expand the product. And we are still without it.

Leahy: What is the state of that in the status of fiber to the premises in rural Tennessee right now?

Bowling: Well, right now, the sad tragedy is that if you have electricity anywhere in Tennessee, you have fiber running in front of your home because TVA requires SCADA systems and those are internal auditings if you will. They determine if there’s an outage. Where is it? It’s an internal ability to know exactly where you are online, where you’re not, and many other facets of the provision of electricity.

Now, Chattanooga got a grant back when Obama was President, and fortunately, they used it successfully. They created the SCADA system for Chattanooga, and they then expanded that into fiber to the premises. And we all know what has happened in Chattanooga since that happened. Someone complained about the source of the original grant. And my theory on that is, I don’t like for the government to pay for things, but once they roast that hog, I want to make sure that my people, my constituents, get as many ribs as they can.

Leahy: (Laughs) I’ve not heard that phrase, but where did you pick up that phrase? That’s a good one.

Bowling: That is a Janice. I have lots of phrases.

Leahy: Do you? I love that phrase. That’s very good.

Bowling: But it’s very common sense. And on my mountain, within my district and the rural seven counties, they have a lot of sayings that I have picked up on, such as plain talk which is easily understood. And when you talk plainly it is. Everyone knows exactly what’s being discussed, and you don’t need to flower things up. Sometimes you just need to give the truth, the plain truth, and nothing but the truth. And they also say if there’s a problem, there’s a solution. If there is no solution, there is no problem. Think about it.

Leahy: Well, I think also, your ability to craft a phrase may come from your long experience as a teacher. You were a teacher. And now you represent the Tullahoma and the surrounding counties in the state Senate.

Bowling: Yes. As a matter of fact, I taught when my husband was in graduate school, then he went into the Air Force and we went to California, and we began our family…