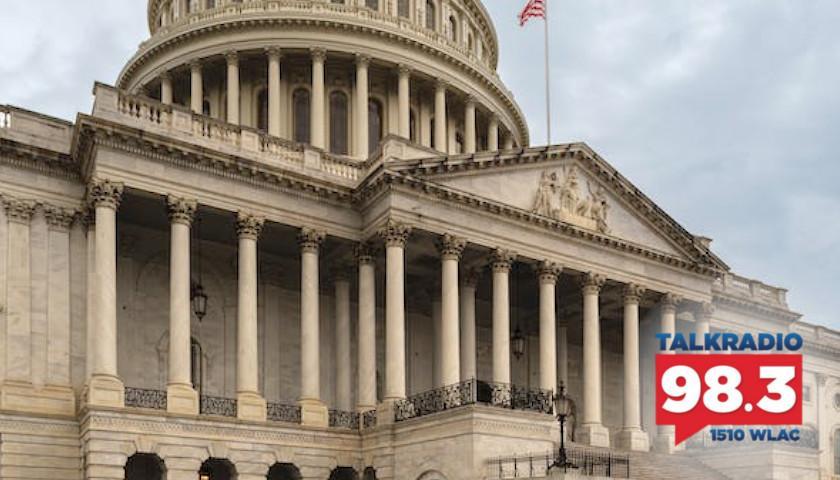 Live from Music Row Thursday morning on The Tennessee Star Report with Michael Patrick Leahy – broadcast on Nashville’s Talk Radio 98.3 and 1510 WLAC weekdays from 5:00 a.m. to 8:00 a.m. – host Leahy welcomed recovering journalist Clint Brewer in the studio to predict that Republican candidates will have somewhere between a heavy trickle and a wave in the upcoming midterm elections for both the House and the Senate.

Leahy: In the studio, all-star panelist, recovering journalist Clint Brewer. Clint, it’s time. This is it. It’s time for your call. It’s your call in terms of the midterm outcomes. Do you agree with the sentiment out there that Republicans are likely to take over the House of Representatives?

Brewer: Absolutely. No, I think that’s going to happen.

Leahy: It’s totally going to happen. The question is, how big is it? Is it a red trickle, a red wave, or a red tsunami for the House?

Brewer: I don’t know what the difference between trickle and wave is.

Leahy: Trickle is you pick up less than 10 seats.

Leahy: A heavy trickle and a wave.

Brewer: But let me just preface this by saying when I was in the media, I completely stopped predicting elections because I’m terrible at it. (Laughs)

Leahy: That’s a very good point. It’s a losing proposition. But I do think Republicans take the House. I do think they take it with enough of a margin to be comfortable.

Leahy: How about the Senate?

Brewer: And I think there’s probably going to be some challenges across the country on both sides of the aisle. I don’t think we’re going to know on the Senate until December exactly where we are.

Leahy: RealClearPolitics, they do the average of polls. They have a whole slew of them out today. We’ll kind of cover those. But what they’re saying is the pickups, the Senate, they’re projecting a 54-46 Senate that Republicans hold all the seats, and they pick up Arizona’s Blake Masters, Nevada’s Adam Laxalt.

Leahy: Now they’re projecting New Hampshire with Don Bolduc taking Hassan. And then dragging across the goal line in Georgia is Herschel Walker.

Brewer: That sounds about right.

Leahy: 54-46. And so we’re looking at Speaker of the House Kevin McCarthy.

Brewer: Who I know you have a lot of personal affection for.

Leahy: I don’t dislike him.

Brewer: But you’ve been critical.

Leahy: That was the thought formulating in my mind, but I didn’t articulate that. We’ve got a little telepathy going on here. (Chuckles)

Leahy: That’s a good one. And then Mitch McConnell will become the majority leader.

Leahy: Yes, we are looking forward to that. In terms of our summarizing what the world is going to look like in January of 2023, we’re going to have a Republican majority in the House.

We’re going to have a Republican majority, likely in the Senate. We’ll have Speaker of the House Kevin McCarthy and we’ll have Majority Leader Mitch McConnell. That’s what it’s going to look like.

Brewer: It sounds good to me.

Leahy: What’s the first thing they’re going to do?

Brewer: I don’t know about the first thing they’re going to do, but the main thing they ought to do is do what the American people want, which is to focus on the economy. We’ve got to figure out inflation.

Leahy: You don’t have to take out a mortgage on your house to go to the grocery store.

Brewer: Yes. Look, I think that’s what’s on people’s minds. I know there are other things. I know people who are very locked into the political system and read a lot and listen a lot.

They have diverse interests. But for the majority of Americans, this election is about the country not going in the right direction.

Leahy: Here’s the thing. I don’t know. For a couple of months, it seems like endlessly, I’ve been describing November 8th as the nadir. Nadir. The low point of our constitutional republic.

Brewer: Constantly pushing on people’s vocabulary on this show.

Leahy: Expanding vocabulary. We’re here to help expand the vocabulary of people. But what we’re going to see, I think, is because the commander in chief, the legal but not legitimate Joe Biden, will veto any good bills that come out.

What’s going to happen, I think, over the next two years is a Republican House and a Republican Senate will just stop all the stupid things that Biden is doing and there’s not going to be a lot of forward progress, but there’s going to be not quite as much damage.

Brewer: I agree. I think there’ll be a lot of regulatory items and other things that are going to be rolled back. But again, don’t forget why you’re there. Don’t forget why this election happened. Both parties are guilty of this.

They get in the midterm or they get it in a big wave and they believe that what got them there was all of these sort of insider baseball or big ideas that they had, and it’s not. It’s very simple things. And if they want to be heroes of the American people, address those very simple things.

Leahy: Will Kevin McCarthy be as disappointing a Speaker of the House in 2023 as John Boehner was in 2011?

Being the Speaker of the House might be the most thankless job in America, and it’s definitely one of the hardest. Those poor folks have to run so frequently so they don’t have a lot of latitudes to make decisions outside.

Leahy: People think, by the way, that being a member of the U.S. House of Representatives is like a fantastic job. It is nonstop work, it seems to me.

Leahy: And you have to have two households and you don’t see your family very much. I think it’s a very hard job.

Leahy: Especially for our friends who are in the minority right now. Oh, my goodness. But they are ready for the top.

Brewer: We need to remember there’s another battle between good and evil that’s going to take place very soon. 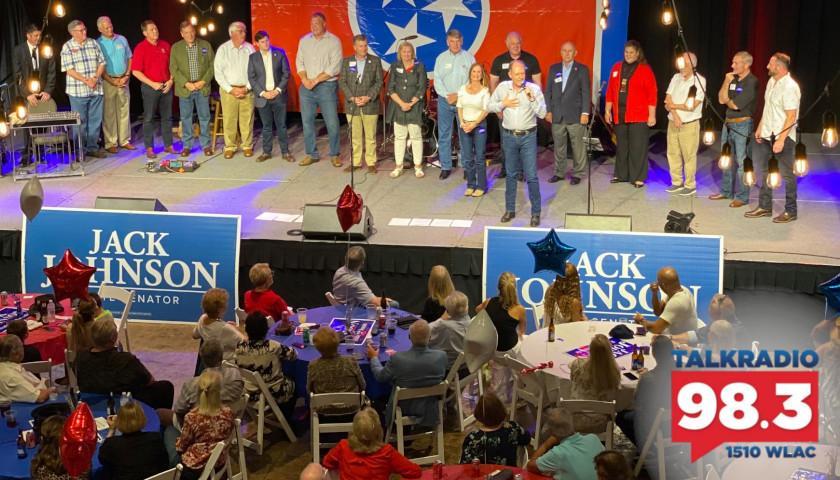 Leahy: We are joined in the studio by somebody who loves radio, our good friend, State Senator Jack Johnson, the State Senate majority leader. Good morning, Jack.

Johnson: Good morning, Michael. Good to be back with you. And you’re right, I do love radio.

Leahy: And you got the radio voice going on. You have some experience in radio.

Johnson: Yes, I did. When I was in high school, I went to work for the little AM 1000-watt country music radio station. I have a very, very good friend, Ben McCain, who was in radio and television, and he encouraged me to do that. So I worked there for a while and throughout high school and college and really enjoyed it.

Leahy: The thing about radio is you just have to focus on what you’re saying and how you are saying it. It’s so much better to do radio than television, because on television you have a shorter time span, and you got to look pretty.

And it’s just an awful lot of work for a very little amount of time. On the radio, you actually have, I think, a closer connection to listeners. I think they get to know you better and they’re engaged in the conversation.

Johnson: And for someone like me who is in public office, the thing I appreciate, and I really appreciate about your show, is the ability to come on and spend more than 15, 20 seconds talking about an issue.

And I’ve done certainly my fair share of hits on television and the 10:00 news, and I respect what they do, but it’s a minute-and-a-half package and they may interview you for 5 or 10 minutes and then they end up using 20 seconds.

And you don’t know which 20 seconds they’re going to use in the piece. So radio, this is live. I can say what I want, you can ask me what you want. So I’m a big fan of talk radio.

Leahy: And the other thing too is it’s so much better in-studio. We’ve done a lot of newsmaker interviews with you over the phone, but there’s so much you can’t do when you’re on the phone with somebody.

When you ask a question, I can see kind of what your reaction is to it and vice versa, and the timing all works better. We do newsmaker interviews because not everybody can come in the studio. But we prefer having folks in the studio. Now, you won your primary.

Johnson: I did, yes.

Leahy: And I guess you don’t have any competition in the general.

Johnson: In the general, that’s correct. There was no Democrat that filed and qualified to be on the ballot. So for the folks in the new 27th Senatorial District in Williamson County, I’m the only name on the ballot.

Leahy: What’s interesting about that in the redistricting, I live, I think, in the only precinct in Williamson County that’s not in your district. You no longer represent me. I think Joey Hensley is my state senator.

Johnson: And Joey, of course, is a great guy.

And it was the county, the only one in the state that was that way: one county, one senator. But due to the growth, I had to give up about 33,000 people. And so we notched out the southern part, Spring Hill, up into Thompson’s Station a little bit and put that in.

Leahy: I guess it’s probably more than one precinct.

Johnson: It is. But you’re in that segment there, and it’s very densely populated, so you can barely see it on the map.

Leahy: I talked to Joey about it, and he said, I’m glad to represent you.

Johnson: Well, we’re glad to have him in our Williamson delegation now.

Leahy: Now, what have you been doing? You’ve been in the throes of campaigning. Tell our listeners what you’ve been doing out on the campaign trail.

And I think they’re all going to be fine. But we do have some of our members that have Democratic opposition. So I’ve been traveling the state a lot, supporting my colleagues and helping them to raise money, and they’re all running great campaigns.