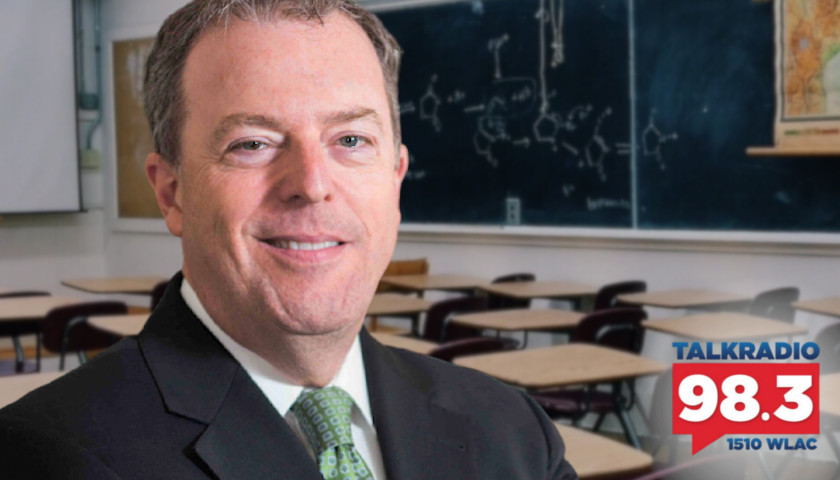 Live from Music Row Thursday morning on The Tennessee Star Report with Michael Patrick Leahy – broadcast on Nashville’s Talk Radio 98.3 and 1510 WLAC weekdays from 5:00 a.m. to 8:00 a.m. – host Leahy welcomed Dr. Matthew Spalding, vice president of Hillsdale College and the executive director of the 1776 commission to the newsmakers line.

During the second hour, Spalding informed listeners that the commission was still meeting to combat the racist curriculum being peddled by the federal government at the state level. Later in the segment, he urged parents to run for their local school boards and for communities to start their own local 1776 commissions.

Leahy: We are joined on our newsmaker line now by Matthew Spalding, executive director of the 1776 Commission and vice president of Hillsdale College. Heading up their graduate school of government at the  Washington, D.C. campus. Welcome, Matthew.

Spalding: Good to be with you. Thanks for having me.

Leahy: You were just in D.C. with our good friend, vice chairman of the 1776 Commission, Nashville’s own Carol Swain who is a frequent guest on this program.

Spalding: Yes. The commission, which had made its report on January 18, 2021, and abolished two days later decided to continue meeting. And so we met at our Washington, DC, campus on Monday to talk about what’s going on in the country and continue to think about how we can try to influence that debate.

We issued a statement and plan to continue meeting and participating in what we think is probably one of the most important debates going on in our country right now about education, especially as it relates to how we understand our country.

Leahy: I saw three key action steps coming out of your statement. Number one, you encourage parents to run for local school boards. Number two, you oppose this new Department of Education.

A proposed rule that’s basically going to codify Critical Race Theory across the United States in public schools. And number three, you encourage people locally to form their own 1776 commissions. Tell us about that.

Spalding: Well, let’s start with the race theory question first. The essence of the 1776 report and if you haven’t read it, I would encourage you to read it, mainly because what the media reports and the critics turn out they really just hadn’t read it.

It’s a report about the importance of teaching straight, accurate and honest history, including all the things about our past, like slavery and those horrendous institutions that were eventually abolished.

But through that, history warts and all, we can still see the principles, the founding and why this country is worth preserving. We study it and teach its principles to our students.

The report also talks about how there’s been the rise over just in the last decade or so, a number of radical arguments which instead of emphasizing that all men are created equal, with regard with Martin Luther King and Abraham Lincoln and many, if not most, of the American founders.

The argument is that we should look at it through the eyes of race. We should teach students to consider the race of their fellow students and of history and everything they look at. We think that is itself a form of racism because you’re teaching racism and unjust.

And that’s what a lot of the practical debate is. The federal level in many states trying to impose Critical Race Theory, set aside from what we call, equity out of history, is about teaching race as the essence of our educational system.

That at the federal level in the form of Department of Education regulations and states, it’s got to be stopped. We strongly mind everyone but the states, state government, state legislatures and localities, local school boards are the most important thing for controlling curriculum.

So we strongly encourage Americans, especially parents with children in schools run for the school board. Get control of those school boards. Prevent this from happening. Institute good curriculum. And in order to do this broadly, this is a public debate now, we encourage states and localities to create their own 1776 commissions.

Just because we were abolished, we’re going to continue meeting. This is an important question. We are citizens. We encourage others to do the same. So we’ve got to engage in the national conversation.

Leahy: If people here in Nashville want to form their own 1776 Commission, what should be the first step they should take?

Spalding: I think the first thing you might want to do is contact their governor or someone in the state. If you’ve got a good governor, it’s always good to have the legitimacy of that, because then you can work with your Department of Education and get good appointments.

But having said that, you could have a city create a 1776 Commission. A group of private citizens could. But I think it’s important to have a very clear concept of what’s pulling you together.

Perhaps you want to center around which we would encourage the principles of the 1776 report. There’s a pledge being pushed out there called 1776 Action that citizens can sign up to pledge to uphold these principles and stop Critical Race Theory.

The principles of the Declaration of Independence played out in our history through our constitutional system. And that’s got to be what holds together. Find your fellow citizens who are concerned about that.

Leahy: We’ve been doing a little bit like that here at The Tennessee Star. We set up our own little educational foundation, the Star News Education Foundation. We have for five years now been doing a National Constitution Bee based upon the book that we wrote called the Guide to the Constitution and Bill of Rights for Secondary School Students.

And we give away the winners, actually get educational scholarships. We do it every October. In fact, Carol Swain was present at our last National Constitution Bee. And I would like to invite you to come down and take a look at it.

Spalding: I think you find it very interesting that’s a wonderful example of what folks should be doing. For the longest time, there are lots of people who are concerned about these questions.

This is not something new that we’ve invented at the 1776 Commission. But I think now that all of that work takes on a new meaning and new importance and a new intensity and we need more of it.

And we need to understand that this has implications for our politics because the education of our students now forms the citizens of tomorrow. And we’ve got to focus on these questions.

Leahy: Tell us a little bit about this U.S. Department of Education proposed rule. I think it’s in the final stages. What is it? Where is it going and will it be implemented?

Spalding: Well, here are the two big things to keep in mind. There’s a massive piece of legislation in the United States Congress that plans to spend about a billion dollars a year for five years. $5 billion on civics education.

That’s a massive amount of money. What the regulators at the Department of Education have signaled to us very clearly is that the administration, through a regulatory process, wants to direct that money to things like Critical Race Theory that has passed the comment stage and the regulation will now go forward.

If that legislation passes Congress, you’ve now got the Biden administration pointing as much of that billion dollars a year towards these forms of education which actually are teaching our students racism.

Leahy: That proposed rule has gone through the next step and it’s been approved?

Spalding: It’s gone through what is called the comment period that is now closed. We issued our comment last week. That means that they can now implement that regulation if they choose to proceed.

Leahy: Well, of course, they’re going to choose to proceed because that’s their view.

Spalding: We presumed they would proceed. Exactly.

Leahy: Why have a comment period if you’re going to just do it?

Spalding: In theory, you’re required by law of a comment period in case you want to adjust it. But I assume they are going to make no adjustments. This is going to go forward. If they then have that money which Congress is on the verge of wanting to pass, they’re going to be able to direct a lot of money towards really bad things.

Leahy: Will Congress pass that bill?

Spalding: I sure hope not. There’s been a lot of uprising against it. But having said that, it’s got sponsorship by Republicans and Democrats.

Leahy: Which Republicans are sponsoring that bill?

Leahy: Oh, my goodness. What’s the name of the bill?

Spalding: It is called the Civics Secures Democracy Act. It’s a very generic name. But look it up and you should tell people to call and try to prevent that from passing.

Leahy: Last question for you. Do you think that the federal government should have a role in funding K12 public schools?

Spalding: That’s a great question. Another big theme in our statement and in the report itself. The federal government has no role in shaping curriculum. That was not only not and was intentionally given to the states.

States control curriculum. Do you remember the debate? I think we all remember this huge debate we had on Common Core a number of years ago when the federal government tried to influence the curriculum.

Leahy: The parents are going to have to really move on this aren’t they Matthew Spalding, Executive Director of 1776 Commission. Thanks so much for joining us.

Spalding: And that’s exactly why. Thank you so much.

Leahy: And come down to the Constitution Bee.

Spalding: I would love to.