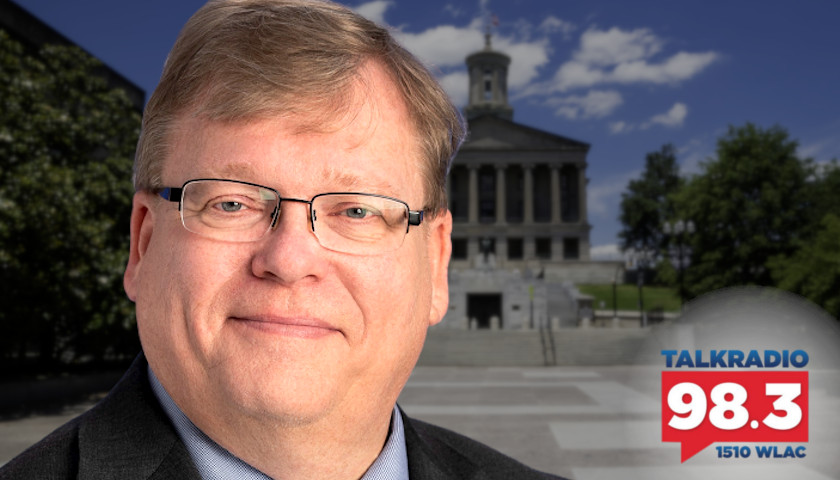 Leahy: On the newsmaker line state representative Timothy Rudd from Rutherford County. A very interesting resolution proposed by Representative Rudd. I’ll just read it. Article 6 section 6 of the Tennessee Constitution. “Judges and attorneys for the state may be removed from office by a concurrent vote of both Houses of the General Assembly. Each House voting separately, but two-thirds of the members to which each house may be entitled must concur in such vote.” Welcome to The Tennessee Star Report Representative Rudd.

Rudd: Good morning. Excuse me. I’m a little hoarse this morning. So hopefully I can work my way through it.

Leahy: Well, I think you’re doing fine. You’re doing fine. We get the message here. It’s a very interesting story that we published at The Tennessee Star yesterday. Headline. Tennessee Republican Lawmakers Seek to Remove Davidson County Chancellor for Alleged Judicial Overreach During 2020 Election. Tell us about this resolution and how you came about putting it together representative Rudd.

Rudd: Well, I’m chairman of the elections and campaign subcommittee of the House. We oversee election law. I’m very sensitive to anything that in any way can hamper our elections or interfere with them illegally. So we watch over that very carefully. Last year, as you know, all across the country judges were intervening and forcing states to participate in mass mail-in balloting and doing other things that really were outside their purview.

And Chancellor Lyle did a similar thing here. She tried to make available mass absentee balloting and that was not within her purview to do. What she didn’t do is she could have overturned the state law which she could have done if she viewed it as unconstitutional. But what she chose to do is simply suspend the law and Implement her own opinions.

She even changed state forms and threatened state employees with incarceration if they didn’t go against the general assembly and adapt her forms. That was then appealed for the November elections to the Supreme Court of Tennessee. They overturned her decision. And she then went back after it came back from Supreme Court and proceeded to change forms again and continued to threaten state employees who tried to interfere somewhat in the process.

We just felt like as we were witnessing judicial overreach across the country that we weren’t going to allow that here in Tennessee. So to my knowledge we have become the first I’m sure the first of many states to take action against any judge which we’re very hesitant to do. But it needed to be done in this case that interferes in our elections without legislative approval.

Leahy: Well, this is very interesting and quite fundamental actually when you look at the problems of the 2020 presidential elections. You saw in the five key battleground states where judges and appointed but not elected officials to change the laws that were the purview of the state legislatures unlawfully. And that in ways that help the Democrat candidate win. It looks like you’re saying here that’s exactly what Davidson County Chancellor Ellen Hobbs Lyle did in essence legislating from the bench and usurping the legitimate authority of the Tennessee General Assembly.

Rudd: She most certainly did. I remember Supreme Court Justice Alito. I don’t have the exact quote in front of me. But he and one of his rulings he said that it is the which the U.S. Constitution also says it is the exclusive purview of state legislatures to hold elections, set elections, and election laws and forms. And she violated that pure and simple.

With the Secretary of State, we passed the year before last we passed voter registration reform here in Tennessee because we saw a lot of out of state groups coming in and paying people to register people to vote and getting mass ballots and a lot of fraud and a lot of mistakes were made. So we wanted to implement some new procedures that would hold people accountable and train them so they could do it properly.

There was a lawsuit in Memphis. And the Memphis judge said that she deemed that parts of our law were unconstitutional and threw it out. I disagreed with that decision, but she did the proper conduct of a judge. She deemed it unconstitutional. Threw it out and sent it back to the legislature. And then we altered it again and sent it back to her and she had no objections to it.

That is the proper way that a judge should act. not just basically suspend state law and write your own opinions and force them on the public. The Constitution both state and federal says that is the exclusive purview of the state legislature. And she stepped over that line. If the state legislature did not hold her accountable we wouldn’t be doing our job.

Leahy: You know, I’m looking at your resolution here. And I think you have totally got the goods. Let me just point the items out in your resolution. number one. Iand around June of 2020 Chancellor Lyle attempted to expand the voting absentee by mail criteria without overturning Tennessee Code Annotated Section 2 6 2001 and without legislative authority.

And number three in and around June of 2020 Lyle usurped the authority of the state election authorities and the Tennessee General Assembly by replacing statutory language on state election forms with her own language. This looks like it is a textbook case of judicial usurpation and overreach to me a Representative Rodd.

Rudd: It is Michael Patrick. We’re actually would very very rarely ever try to go after a district attorney or a judge for a similar action, but this was interference in our election process. Sometimes it’s been criminal activity or other activity, but we really had no choice. We can’t allow this to stand and if we allow a judge to get away with this, they’ll start doing it on other legislative matters outside of this.

The Tennessee Bar and some of the liberal judges are trying to confuse people they’re trying to argue this but it’s a criminal court matter. And we don’t meet certain measures there can trying to confuse the public and even other lawyers around the state by trying to change the narrative of what this is doing.

And what this resolution does is it calls for the establishment of a joint Senate and House Ad Hoc Committee to investigate these charges and what she did to see if it merits impeachment. And if it did that came out of that committee, then at that point, it would go to a joint House and Senate meeting and by a two-thirds vote of each House, they would vote to oust her. So this resolution in itself is not to remove her but it calls for the process to begin the investigation on whether she should be removed.

Leahy: It’s entirely constitutional and is very much needed. One of the things I’ve looked at Tim here is the fact that the state legislatures in Georgia and Michigan, Wisconsin, Arizona, and Pennsylvania, actually, although controlled by Republicans did not properly assert their authorities to have election law followed in those states. I salute you for having the insight and courage to put such a resolution in front of the Tennessee House of Representatives.

Rudd: Well, we got 67 members of our 73 Republican members. Of course, some are in the hospital and some have conflicts. Maybe they’re presenting cases in our court or something. Others are a chair of a committee and want to stay neutral. But almost all of our caucus is supporting this including virtually every leader we have in our caucus.

They know it’s something that needs to be done. Tennessee has a history in recent years under Republican control of trying to be proactive and to head off things that are happening in other states. Whether it be this or protecting people from frivolous lawsuits or other things that we do. Just like Scott Cepicky is currently carrying the sports gender bill to protect women’s rights in sports.

We try to be proactive before it becomes an issue here. And that’s why we’re doing this now. Senator Nicely is carrying it the Senate but the House is going to move it first then that originated in the house and we have a much longer process. The Senate will not run their’s so we have got it out of committee.

Leahy: State Representative Timothy Rudd. Please come back and give us an update on this. Thanks so much for joining us today here on The Tennessee Star Report.

Rudd: Thank you. I’m glad you had me maybe next time on my voice will be normal.

Leahy: Thanks so much for being with us.

Listen to the second hour: