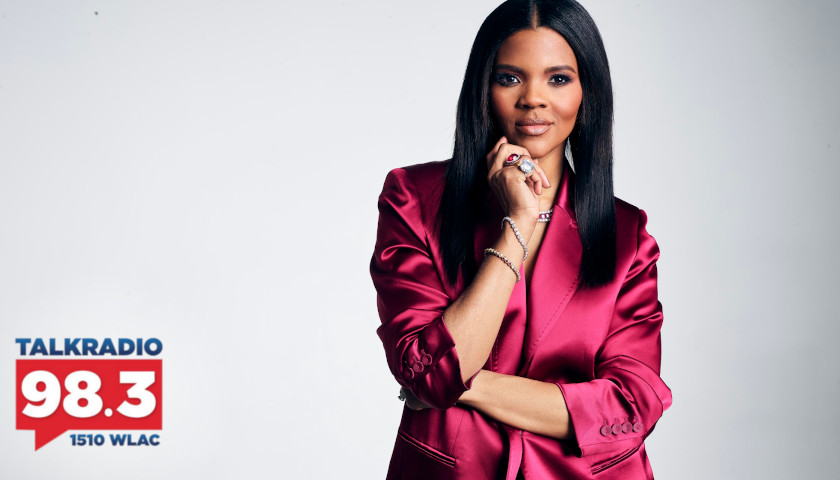 Live from Music Row Friday morning on The Tennessee Star Report with Michael Patrick Leahy – broadcast on Nashville’s Talk Radio 98.3 and 1510 WLAC weekdays from 5:00 a.m. to 8:00 a.m. –  host Leahy welcomed conservative political commentator and host of the new show ‘Candace’ to the newsmakers line to talk about becoming a Nashvillian and her new show “Candace.”

Leahy: We are joined on our newsmaker line by that great conservative Candace Owens who’s moved to Nashville and has a new talk show coming called “Candace.” if you’re driving into Nashville today, you can see the Billboards announcing the program. Welcome, Candace.

Leahy: We are delighted that you’ve moved to Nashville. How do you like it here so far?

Owens: Oh, we are so thrilled. Actually, my husband had always wanted to move to Tennessee and this just ended up lining up. The stars lined up so we couldn’t be happier to be here. And what a perfect place to start a family.

Leahy: It is a great place. And of course, we love and I’m sure you’ll love the no state income tax. How about that?

Owens: That’s the best thing especially coming from Washington D.C. So that is what we call a perk.

Leahy: It sure is. So tell us, Candace, you are now part of the folks at The Daily Wire. I was over there a couple of weeks ago and had lunch with Jeremy the CEO. Great guy, great group. You’re launching a new talk show tell us about it called “Candace.”

Owens: Yes. I’m so excited. I’m actually going to be the first girl to join the guys over at The Daily Wire. So I get to break that up a little bit. And it was really such a creative process. Jeremy and I came together and said what sort of missing from the media spectrum. There’s a lot missing first and foremost. Obviously just allowing conservatives to be in culture has always been problematic.

But we also felt like we were losing sort of the late-night talk show greats. It kind of feels like it died with Jay Leno and now it’s sort of everything is so politicized and so polarizing at the expense of the conservative. So we thought why not actually do a live studio audience show that has a late-night vibe and sort of brings something unique to the culture at the same time. And bam! Candace was born.

Leahy: What a great idea I cannot watch any of the other late-night shows. They’re just unwatchable, unbearable. I turn it off within like two seconds of seeing it.

Owens: They’re also just not funny anymore. It’s like they’re trying so hard to be offensive and to do everything at the expense of more than half of America. They just sort of lost their touch and they seem to be angry all the time. And that’s not to say that my show is going to be all humor. Obviously, I think that I sort of sit somewhere in the middle.

I think humor is the best way to deliver it. Sometimes you just need to deliver the message. And we have so much going on and so many people that feel are unheard. and so to also deliver monologues that are meaningful and hopeful I think is also probably the most important adjective. Because a lot of people are feeling hopeless in today’s circumstances. But there’s plenty to be hopeful about.

Leahy: I like that hopeful angle. and you’re very right. These other late-night talk shows are just not funny. They’re just bad to watch. I think your program will be a big big hit. Now, you said something very important. You’re going to be taping this before a live audience here in Nashville. Is that right?

Owens: That is correct. And that is something that I think is so exciting.

Leahy: Just you and me here talking now. How can I get tickets?

Owens: (Laughter) You know what? I don’t know. I’m telling you there are so many things at The Daily Wire the other day. I was walking through the offices and a girl had on a Candace t-shirt, and I went where do I get one of those? The marketing department knows more than me about these things. But they will be announcing I think this week, you know, the first episode that we’re shooting is obviously a smaller crowd.

And then I think that by the end of next week, they’re going to launch a link live on the website where you can grab tickets. And now I guess we will be the required stop for every party coming in, every bachelor party, and every bachelorette party will say they’ve got to go for a live taping of Candace.

Leahy: Oh absolutely now, so this is going to come out once a week on Fridays, is that right when it comes out?

Owens: That is correct. And then we might scale up. We just have so many ideas right now that we’re so excited about. We’re already in our heads were 10 episodes out. We’ve already written so much content that we think inevitably we’ll end up scaling up the show but we are going to start with just once a week.

Leahy: So the late-night shows have writers do you have a group of writers working with you? So actually I write my own monologues. I am a writer obviously a published author and majored in English and journalism. So I love to write. But it is a collaborative process. They brought in some other writers to kind of go back and forth on ideas.

And that is just such an exciting process. I mean to be in the room and be talking about the topics that I say to them hey, I want to make this entire episode regarding this specific topic. And then we sort of you know, fit in the room and throw around a ball and laugh and come up with funny jokes. Just at one another. So it is a collaborative process but it’s being largely led by me.

Leahy: So Candace, here’s what I think. I think this is going to be such a big hit that you won’t be able to just do it once a week.

Owens: From your mouth to God’s ears.

Owens: Right. We just need to not take ourselves so seriously. And at the same time, there are obviously incredibly important issues that are going on. I’m so hopeful that we’re going to bring something really unique to listeners. And once again to just sort of say to the world that we’re not ashamed to be conservative. I think there’s this sort of this feeling that’s definitely like being pushed upon us by the mainstream media that we’re somehow not allowed to exist.

Owens: And there’s so many of us. So it’s going to take a little bit of courage. And I want to always inspire that courage amongst my listeners and my followers to say, you know, I’m here, I’m Candace, I’m doing this unapologetically and you should too.

Leahy: So your Twitter account is @RealCandaceO. How can people get your program? Is it part of the daily wire subscription or is it going to be free for a while? How’s that going to work?

Owens: Yes. And you definitely want to subscribe to the daily wires? You can go to DailyWire.com/subscribe. You can use my code, which is CANDACE of course. And you are correct that you can follow bits of the show. We have an Instagram handle and a Twitter handle so you can follow me as you mentioned at @RealCandaceO. But you can also follow @thecandaceshow. And of course, if you follow me on social media, I’ll be pushing out so much content that it will be very hard for you to miss.

Leahy: So what we’ll do is just you and me talking here. We’ll talk to Jeremy about this. Just send us a few clips of it like, you know before and we’ll play them on the show so people on the radio show will have an idea of the fun that’s coming.

Owens: So people have an idea of the fun. This coming absolutely will give you guys a little bit of an exclusive Tennessee deserves the exclusive everything’s happening in this state. so we can definitely make that happen.

Leahy: Why is it do you think that so many conservative media outlets and people are moving to Nashville, Tennessee and in Middle, Tennessee?

Owens: Because they’re being chased out. (Laughter) The policies of New York and LA are no longer desirable. It’s not a place to raise a family. Look at the crime rates that are skyrocketing. What you’re really seeing in these coastal cities is just a manifestation of these socialist policies. The socialist thuggery as I like to say that these Democrats come up with and people realize that you just can’t live like that.

Leahy: You are a Nashville resident and we are so happy. And you have a baby. You just had a baby.

Owens: I do. Yes, it’s crazy to think that. My son who is half English and half American is going to be raised in Tennessee. It’s just an amazing feeling. We always talk about that just being raised around people with good morals and people that I love this country. His name is Georgie. And he is only eight weeks old and he’s already a Tennessee resident. How cool is that?

Leahy: That’s very cool. You’ve been out there as a prominent Black conservative woman who’s just not taking any guff from the liberals and you’ve become a target. And you masterfully punch back in a way that is fun to watch. And that’s why one of the reasons why you’re so popular and why I think your show is going to be such a success. What has changed in your life now that your mom?

Owens: People ask that question and I think that the correct answer to that is that all of these topics just bear more weight to them. And what I mean by that is that you can obviously debate political topics just on the merit of the discussion. But when you have a child you realize that how we decide these debates.

You know who ends up winning these debates is really determining the future of how your children are going to be raised. I often ask myself is my son going to be raised in the same America that I grew up in? And really with the Democrats at the wheel, the answer is no. And so everything becomes so much more severe and you just want to give it your absolute all when it comes to informing listeners and saying to people this is really not okay where we’re headed.

And we need to sort of stop this train which is falling off of the tracks at the moment. So I definitely think these discussions have just become so much more real to us. And I definitely want to give it my absolute all to make sure that we don’t lose America and we don’t lose this country.

Leahy: When we come back after the break with Candace Owens we’ll ask the big question, which is did she watch the Joe Biden event last night, and what was her reaction? So Candace, think about that over the break. I’m sure you’ve thought about that quite a bit.