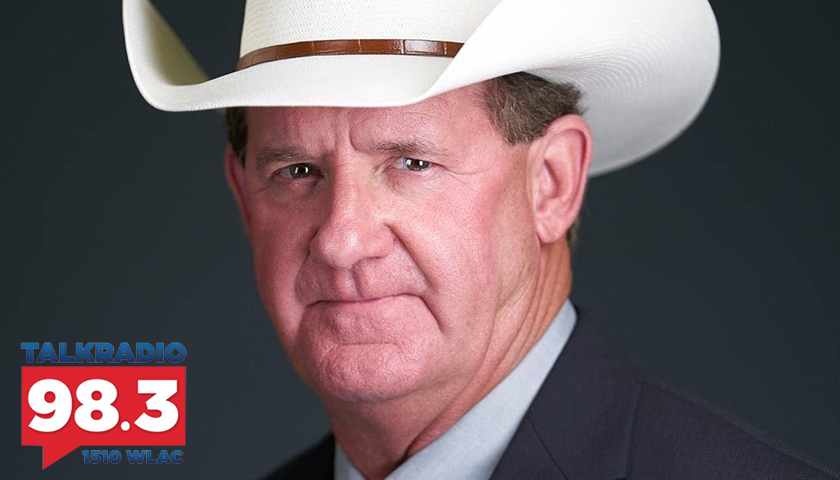 Live from Music Row Tuesday morning on The Tennessee Star Report with Michael Patrick Leahy – broadcast on Nashville’s Talk Radio 98.3 and 1510 WLAC weekdays from 5:00 a.m. to 8:00 a.m. –  host Leahy welcomed Jackson County, Texas Sheriff, AJ ‘Andy’ Louderback to the newsmakers line to discuss the chaos at America’s southern border and the Biden’s administration’s denial of it.

Louderback: Thank you, Sir. I appreciate you invited me to say a few words this morning. Thank you.

Leahy: Well, look, we met two years ago in Washington, D.C., and had a great conversation there. It’s been a bad two years for border control, hasn’t it?

Louderback: It’s the worst we’ve ever seen in the history here at the southern border here with Texas. We haven’t experienced anything like what we’re seeing today from the effects of the policies of the Biden administration and the chaos and destruction they’ve created.

Leahy: Here’s my question to you as a Sheriff enforcing the laws of the state of Texas, you look at the failure of the Biden administration to enforce our federal immigration laws. And my question to you is, is this intentional on their part? And what impact does it have on you?

Louderback: Michael, it’s not just intentional. It’s strategic. It’s planned, it’s operational. It’s a very concerted effort. Probably a year or more prior to there’s evidence of a year or more prior to the Biden administration taking office and anticipation of the implementation of the policy changes to completely gut the INA were more clearly done on purpose to achieve exactly what we are doing today and we see every day.

So this is not anything that is haphazard. They were told repeatedly. It was written by senior staff of CBP. And if you do this, this is what you’re going to do. There is ample evidence of that from the directors at CBP.

People have been there for 30 plus years, true experts in border security told this administration repeatedly meeting after meeting what was going to happen if they persisted in doing this to the United States?

Leahy: The Biden administration knew this would happen, right?

Leahy: So as a Sheriff there, what recourse do you have against a federal administration that is violating federal law?

Louderback: Well, not much. Really the first duty here for most of us is to inform. I mean, that’s what most of us are trying to do. When the American people are uninformed or misinformed we don’t get any results at all.

And we see the results of that. We’re in the informed stage right now urging governments, state governments, to go to work here and try to alter these policies or trying to get them to all these policies, which is exactly what Governor Greg Abbott is doing in Texas.

Leahy: Now, you mentioned Governor Abbott. There was a big press conference where he said, we’re going to build a wall of our own and we’re going to arrest people that come across it. Now, that’s a good thought. How practical is that?

Louderback: The complexity of finishing portions of the wall exists. The ability for the state of Texas to strategically place the resources necessary to start filing criminal trespass and the child endangerment charges would probably two most prevalent other than human trafficking, smuggling.

The state of Texas put a ton of resources and over a billion dollars dedicated to some different changes. And, of course, there’s a special session coming up legislatively that would go along with the declaration of disaster that he has done.

These things, we hope, will start to turn. And, of course, one most significant thing, Michael was the signing of the Emergency Management Assistance Compact in Arizona. So as these movements build, where we see more and more states coming on board, where federal policies are destructive to states, we’ll see where this goes.

But it’s obviously moving in the right direction for the rule of law and for us to try and have some recourse to the border issue and to the national security issue and border security.

Leahy: What does this do to the morale of your department and your employees when you see that you’re being undermined?

Louderback: Well, in our business, we’ve been under attack before the Biden administration took office. We’ve been subjected to all types of things, from the funding to qualified immunity to just outright racist attacks that every law enforcement officer in the United States is a complete racist.

And that’s what we have to do. Yes. It’s demoralizing. It’s more demoralizing for the men and women of the border patrol working there. Imagine working there or any job that you had in the United States. It’s no different than a County Sheriff saying to his deputies I’ll tell you what? (Inaudible talk) We’re not going to accept any cases. I don’t want you to arrest anyone unless they are .20.

Louderback: Yeah. We’ll just make that up. That’s a policy now for us.

Leahy: By the way, what did Vice President Kamala Harris say when she went down to the border and visit with you? (Laughter) That’s a joke.

Leahy: They think we’re really pretty stupid, don’t they? (Louderback chuckles) Well, I know you are measured in your statements, Sheriff. I can say that.

Louderback: Let’s move onto other questions. Regarding the Vice President, I think it’s pretty obvious as to what’s going on here.

Leahy: (Laughs) Yes, I can do that. And we won’t give you a hard time about it. Jackson County. Is that right between, like, McCallen and Corpus Christi? Is that where it is?

Louderback: Just passed Corpus. We’re on the geographical major corridor into Houston, Texas, which is, of course, a huge magnet for all time. Whether it’s narcotics or human trafficking or human smuggling.

Leahy: You have what? 12,000 residents. How many residents of the county?

Louderback: We’re just under 20,000. Under 20,000. I remember that now. Have you seen an uptick in this travel going through your county by illegal aliens in the past five months?

Louderback: (Inaudible talk) The bailouts, the crashes, they’ve stolen vehicles,  license plates, the increased methamphetamine, increased fentanyl. There’s not an agency around me that doesn’t have increased narcotic issues. The empowerment of the cartel has been done.

Leahy: Nothing says safety and security of citizens of Jackson County, Texas like a Biden administration that won’t enforce immigration laws. Right, Sheriff?

Louderback: Yes, sir. You got it.