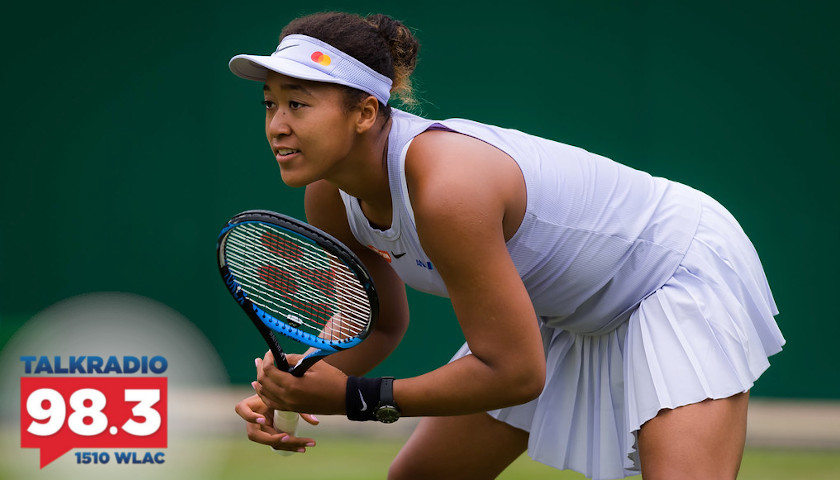 Leahy: In studio, our good friend, the newest all-star panelist on The Tennessee Star Report. My former boss at PJTV. The editor at large for the fastest-growing conservative publication in the world.

The English language world that is. The Epoch Times. Roger, you’re a tennis guy. And I wanted to ask you a question about Naomi Osaka in a bit. But first, let’s talk about tennis. You have been playing tennis pretty much all your life. Tell us how you got involved in tennis and why you chose to stick with it.

Simon: All right. Well, first of all, I want to say right off, I’m a mediocre tennis player. You’re not talking to a Ralphael Dadole here.

Simon: You and I ought to play sometime. It began this way because I’m one of those short people who has no reason to live. Remember the song? (Leahy laughs)

Simon: No. I’ve been trying. I grit my teeth every morning trying to stretch.

Leahy: You know, like that old Andy Griffith episode where they had to stretch Barney out to make his height requirement.

Simon: I don’t remember it.

Leahy: But you haven’t done that.

Simon: I haven’t been able to make it.

Leahy: So you grew up in Manhattan?

Simon: I grew up in Manhattan, across from Central Park. I love sports as all the kids did in those days in New York. And because we love the place, stickball everything, stickball, the whole nine yards. And most of all, I loved basketball. And boy was I sad because not only could I never slammed dunk, I couldn’t even see the net.

Leahy: But you love sports.

Simon: I love sports. And I took up tennis at a very young age, like six or seven. And basically, with a few years off here and there, I played it all my life. But what I discovered there’s a study that was made in Denmark that of all the sports tennis adds, according to their study, and it’s been backed up by a British study add nine point seven years to your life.

Leahy: An extra decade from tennis.

Simon: Yes. And you only get a year and a half from jogging. It’s a very interesting statistic, even if it’s not right if it’s close to right.

Leahy: What do you get for drinking too much coffee? (Laughs)

Simon: Well, I actually do both. So I’m so confused. Here’s the rationale for this is. The movements in tennis are continual in all different directions. So you’re exercising your whole body. Secondly, you’re exercising your mind because, as Robin Williams called it, who was a tennis player. It’s chess at 90 miles an hour.

Simon: You have to make your decision superfast. And also the third factor is very social. You’re playing with friends all the time or friendly enemies as it happens.

Simon: So it touches a lot of bases, and that’s probably why it gives you all those years.

Leahy: You are really dedicated to playing tennis.

Simon: Oh yes. I do it two or three times a week.

Simon: It really does keep me relatively fit because I’m also dedicated to eating.

Leahy: So am I. Didn’t you write a novel about the greatest of all time about a tennis player.

Simon: It’s a fictional version of myself. It’s a Faust-type story about a guy who’s been a mediocre club player all its life, but it gets to play with a doll and the joke of it.

Leahy: I need to get your advice on this. Crom and I had a discussion about this the other day and we were on a little had different views on it. It’s about this really, really good tennis player, Naomi Osaka. She’s about 22. She was born in Japan to a Japanese mother and a Haitian father. When she was three, they moved to Long Island, New York, where his parents were. And the father kind of brought her up, like the Williams girls were brought up. And she’s an extraordinarily good tennis player.

Simon: I think she’s currently number two among the women. Bart the Australian woman, is number one. And the number one women’s tennis player really inherits the most famous woman actually in the world. Serena Williams is, of course, for so long the greatest woman’s tennis player and possibly of all time.

Leahy: Here’s my question for you about Naomi Osaka. She was at the Us Open that she won three or four years ago? She beat Serena. And after at the press conference afterward, she apologized for beating Serena. She seemed to have to me I don’t know, like really honest psychological difficulties with beating her idol.

Simon: I was a better player than my father, and I think I beat him when I was around 12 or 13, and I felt weird about it. It goes on. Kobe Bryant was better than Jellybean.

Simon: And there are issues with that, but that’s minor compared to the issues that Naomi has.

Leahy: Naomi I think she does seem to have some very severe psychological problems, although it doesn’t appear to have any impact on her play on the court. Here’s the thing. Now of late she is refusing to go to the press conference afterward. It’s a big, big deal.

Simon: It’s a big deal in the tennis world because the tradition has been for years that the winner and sometimes the loser goes and sits in front of the press and deals with questions that may or may not be nasty. It’s certainly not like a press conference that Donald Trump had. It’s more like, how come you missed that backhand?

Leahy: But apparently, now she said she refused to attend one of these press conferences and she apparently continues to refuse to attend them. She says she’s struggling psychologically is how she’s presenting it.

Leahy: I’m a little bit more conciliatory because I do think she’s got some very serious psychological problems. I told Crom this. I said, Crom, if I were heading up the World Tennis Association, I would give her, like, a six-month reprieve to kind of figure it all out.

Give her a break for a bit. But I’m not the head of the World Tennis Association. And Crom said that’s a very good thing.

Simon: I hate to be diplomatic, (Leahy laughs) but I’m somewhere in between you guys. There are so many people who have psychological problems in the world. I mean, everybody’s got a little bit of it.

And this is a woman making more money than 99.99 percent with the eyes of the world on her. And I have some sympathy for her. But I have more sympathy for a lot of people out there on the street who can’t handle life. It’s a relative issue. I mean, maybe she should just suck it up and deal with it.

Leahy: If you were advising her, if she called you up and said, Roger, what’s your advice? What would you say? If she did call you, you’d say…

Simon: Well, first of all, I’d say, get yourself some therapy, but she probably already is.

Leahy: I would guess. If it’s this big an issue.

Simon: She didn’t come from a deprived environment.

Simon: Oh, no. And probably never really did.

Leahy: I think you are probably right.

Simon: It’s an interesting situation. The reason I’m being a little diplomatic is I don’t know this person.

Leahy: We are reaching out to interview here by the way. So I think the odds are not good at all that we’ll get her. (Laughs)

Simon: I think you’d have a better chance interviewing Putin.

Leahy: Or Mayor Cooper. I don’t know which one.

Simon: Maybe one of those difficult ones that want to hide from you.

Leahy: We’ll have to play which one is most likely to accept an interview with us, Vladimir Putin, Mayor John Cooper, or Naomi Osaka. I think they’re all about the same level.