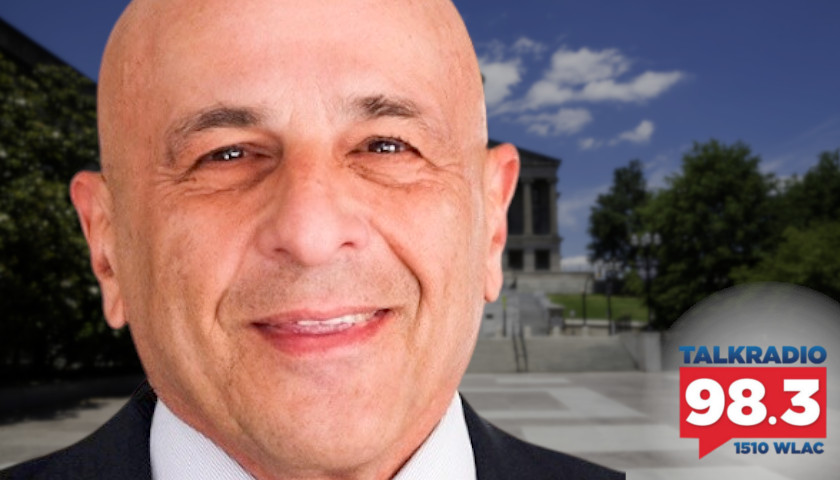 Leahy: We are joined in studio by our newest all-star panelist, Academy Award-nominated screenwriter, my former boss at PJTV, a great novelist, and also now an editor-at-large for The Epoch Times, Roger Simon. Good morning, Roger.

Leahy: Yes, it is a good morning for America. And you had a terrific column yesterday at The Epoch Times. I want you to talk about it.

I’ll read the headline. You fill in the details. Headline. Tennessee and Georgia Need Real Republican (Conservative) Governors ASAP. Tell us about that column.

Simon: Well they sure do. I’ve been spending has been a part of last year, back and forth between here and Atlanta, sitting there in the State Farm Arena, watching them count the votes and all that stuff.

So I’ve been sort of into this. Who’s the governor in both states since I live here in Nashville? Anyway, I arrived in Nashville from LA exactly when the last governor gubernatorial primary was going June of 2018.

I was invited almost immediately to some swanky house in Belle Meade or Green Hills, and I have forgotten where it was exactly, but to listen to some of the principal candidates, among whom were Governor Lee, Beth Hartwell, and Diane Black.

Simon: I don’t think Randy Boyd was there that night.

Simon: And aside from the front door of the house, just inside the front door was a big cut out of Trump. It’s a cardboard cutout and a foot higher than everybody else.

That signaled that there was trouble ahead here. And the three candidates also had paid him an obeisance as we say in the French way.

Simon: So we elect Governor Lee. My reaction was to him that time, and I was pretty close self listening and was 15 feet away was kind of meh. (Leahy laughs)

But frankly, I’ve been around politicians a lot because I’m a writer. I’ve seen Bobby Kennedy speak the day before he was shot.

Simon: A long time ago. He was a pretty electric speaker. He and Trump are the best political speakers I’ve ever seen. My meh reaction didn’t mean that he’d be a bad governor it just means he wasn’t very electric as a speaker in a small group.

Okay, that’s a minor part of being a governor, really. But since then, it’s all been downhill. What’s interesting about Tennessee and also Georgia is interesting in this regard because the electorate, the rank, and file, is way, way more committed to Conservatives than the politicians themselves.

Leahy: By a long shot.

Simon: By a long shot. And that is something that I have now and Mr. Leahy here and a lot of people of good spirit are now are on a crusade to bring them together like a magnet.

(Leahy laughs) And that’s what’s got to happen. My column talks about that, and I think it is happening. I mean, a lot of the things that are going on I’ve seen sometimes through my wife, who is getting very active among the women here in both Davidson and Williamson counties.

They’re really up in arms about the educational thing, CRT, and all that stuff. And they have a right to be. And this is radicalizing them in a good way. It’s making them committed. And I think the times they are a-changing as someone once said.

Leahy: Yeah, I think you’re quite right. And it’s very interesting to have this disconnect between Conservatives like the Moms for Liberty.

They’re very strong in Williamson County, and they’re not putting up with basically this claim that we’re really not teaching critical race theory except, yes, they are. And Bill Lee is doing nothing. Zero zip on that agenda.