Prof. and Author of ‘Debunking Howard Zinn,’ Mary Graybar Joins the Tennessee Star Report to Talk About Her Approach to the New Book 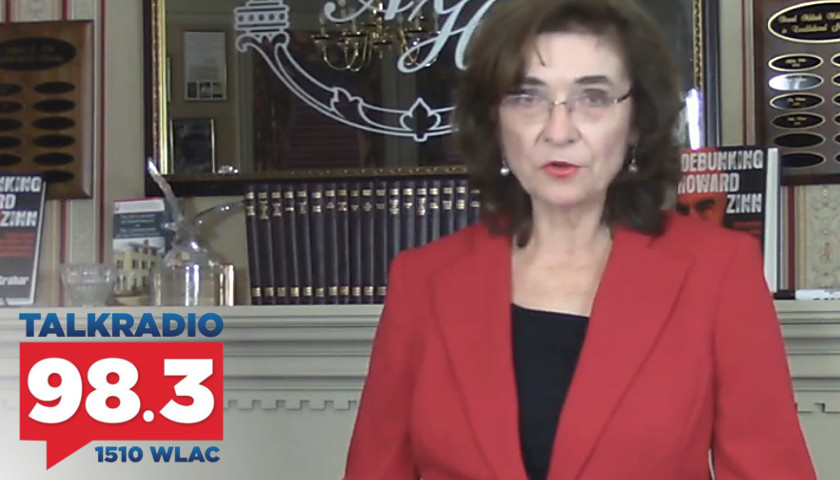 Live from Music Row Monday morning on The Tennessee Star Report with Michael Patrick Leahy – broadcast on Nashville’s Talk Radio 98.3 and 1510 WLAC weekdays from 5:00 a.m. to 8:00 a.m. –  host Leahy welcomed all-star panelist, professor, and author of Debunking Howard Zinn, Mary Grabar to the newsmakers line to discuss her new book and some background into Zinn and the Communist Party USA.

Leahy: We are joined now on our newsmaker line by Mary Graybar. She’s the author of Debunking Howard Zinn Exposing the Fake History That Turned a Generation Against America. She is a resident fellow at the Alexander Hamilton Institute for the study of Western civilization in Clinton, New York. Good morning Professor Graybar.

Leahy: We’re delighted to have you on the program. by the way, I grew up not far from where you are this very moment. I grew up in Munsville New York, which is near Oneida. just south of 97 miles. I attended Stockbridge Valley Central school when they were not teaching Howard Zinn. (Chuckles)

Grabar: (Chuckles) Oh, there there was a place when they weren’t teaching Howard Zinn.

Leahy: There was a place in time. So you grew up in Slovenia when it was still part of Communist Yugoslavia.

Grabar: Sorry. I didn’t grow up there. I came here when I was two.

Leahy: Oh you were born there.

Grabar: Yeah. Yeah, I grew up in Rochester, New York.

Leahy: Oh not too far away. I grew up right around there. I was actually born in Oswego. So I know that neck of the woods. So tell us about Debunking Howard Zinn. When did you become aware of the ubiquitous Anti-American nature of this Howard Zinn book that has Basically dominated K12 public education for many years now?

Grabar: Well, it was around 2008. I wasn’t yet completely canceled from teaching. I was teaching in Georgia. teaching college. I have a Ph.D. in English. I’d gone through the torture of graduate school. I managed to find some good professors and I started writing about the corruption of education from the inside and. Howard Zinn was still alive.

And I wrote an article about him and then I presented a report that I wrote at a conference upon the release of his FBI file shortly after he died in 2010. and that’s close to 500 pages. And what that revealed upon examination by another historian was that Howard Zinn had been a member of the Communist Party USA in the late 1940s and early 1950s. And so I started looking into him and had proposed this book back in 2011.

And the project fell through. and then I was contacted again in 2017. and I’ve been keeping track of Howard Zinn and his very very popular people’s history of the United States which has broken all kinds of sales records. And so I started writing this book in late 2017 and it came out in the summer of 2019. I couldn’t even imagine what I would find in terms of the Distortion, the manipulation of information, and the outright lies, you know that are in this is pseudo-history book that’s used in classrooms across the country.

Leahy: Why is it been so widely adopted? Because I think you know by the time it came out 1980 we already had the long march into the institutions of the radical professors from the 1960s who avoided the draft and who were neo-Marxist in their thinking. The way it had been prepared for him, so we were kind of used to these new interpretations of history according to a Marxist blind.

And he just took it the next step further and basically wrote a communist version of American history. I mean, you can go back to Marx and Engels and you see a lot of that and Howard Zinn’s book and William Z. Foster the CPUSA chairman and the 1950s who by the way was the chairman while Zinn was in the Communist Party. And so we kind of heard echoes of it, but he really outright lies in the book.

He distorts the evidence, leaves out keywords, and makes things up. And what I did is I just went through the key chapters in his book with a fine-tooth comb and looked up the sources and looked up what the real histories and exposed him. And also he also plagiarizes by the way, which would automatically get your book kicked out if you or someone other than Howard Zinn.

Leahy: Wow. How has your book been received?

Grabar: It’s been well received as you can imagine in conservative circles and people who care about American history. If you go to the Amazon page, you’ll see overwhelmingly that I have five stars. And then the next biggest category is one star and these are not the verified purchasers and they haven’t even cracked the cover of the book because there really are Zinn worshippers out there.

They believe he is the be-all and end-all as far as historians are concerned and they just will close their eyes and stop up their ears if you say anything bad about him. So there really is this cult-like following. And I think it emerges from the fact that his book is used in the lower grades. There’s a young people’s history of the United States.

Leahy: If you bring your book to any K-12 Board of Education and you were to say read this book and throw out Howard Zinn’s books from the curriculum. What kind of response would you get?

Grabar: Well they tend to be wishy-washy. People don’t really understand the extent of how much he distorts history. And they tend to think well, you just need two different views of it, even of history, even if one is based on falsehoods. And so they tend to you know not be well-informed. A person who is well informed I would hope would pick up the book and find the evidence for these charges that have been made against Howard Zinn for four decades. For decades now, others have been complaining about his distorted history. But what I do is I look at the particular points he makes, look at passages, and expose what he does to distort the real history and make it into a communist version of American history.

Leahy: Do you have any hope for the future of public education and in the study of history in America?

Grabar: It looks pretty grim right now. I don’t know what’s going to happen. I was hopeful with President Trump’s move of The 1776 commission has got some great people on there. Carol Swain was the co-chair and there was some Hope For Real reform. I was at that conference on Constitution Day and President Biden is just dismantling everything. I think the way to begin is to just keep kids out of public school. (Gasps) If I had a small child today, I would keep him or her out of school. Definitely and even if they’re in a private school keep a close eye on what they’re being taught because a lot of these teachers find their ways into private schools and they’ve been radicalized in their own education and try to impose that on young children and teenagers.

Leahy: It’s interesting. You say keep your kids out of public schools. That’s what I’ve been saying here on the air for well over a year. I think the kids come out and they hate America. This is not a good thing.

Grabar: Yeah, they really have been brainwashed and it’s not only by what you know the facts that Howard Zinn distorts and presents but it’s also the way the information is presented. It’s very emotionally manipulative. The teachers are teaching social and emotional learning there are (Inaudible talk) and that’s kind of exposed in his book. So yeah, it’s it’s really really really dangerous.

Leahy: Mary Graybar, author of Debunking Howard Zinn Exposing the Fake history that turned a generation against America. You can buy the book on Amazon. Mary, will you come back for a more extended discussion of where we can go in the future with our kids?