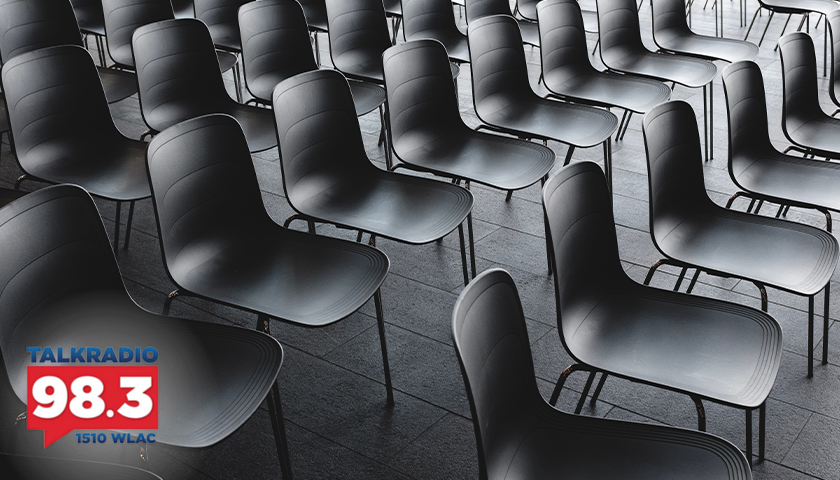 Live from Music Row Friday morning on The Tennessee Star Report with Michael Patrick Leahy – broadcast on Nashville’s Talk Radio 98.3 and 1510 WLAC weekdays from 5:00 a.m. to 8:00 a.m. – guest host Henry welcomed Pamela Provost with the Truth Be Told Conference to outline the speakers and event that will take place on October 2nd.

Henry: Welcome back ladies and gentlemen to The Tennessee Star Report. We are so happy to be joined by a fantastic guest online right now. Pamela Prevost. The website is truthbetoldtennessee.com. And let me just tell you all, it’s October 2nd of this year. 9:00 a.m. to 4:30 p.m.

Let me just give you a quick rundown of a few of the speakers, and then I’m going to get Pam to tell you what this is about.

We’re talking Steve Deace, Trevor Loudon, Sean Davis, Congressman Mark Green, Robby Starbuck. We’re talking David Fowler. I mean, the list goes on and on. It’s incredible. Pam, if someone were to come up to you on the street right now and just ask you, what is the Truth be Told conference? What’s your response?

We may not be able to do much nationally or in D.C., but we can certainly affect change right here in Tennessee by working together again.

Henry: Truthbetoldtennessee.com. Here’s from the website. This informative conference will provide solutions to strengthen our children and family, strengthen our churches in the community.

Get plugged in and make a difference. Learn who to listen to and where to get accurate news. Learn what books to read and become educated. Where did the motivation for this come from? How did this crop up?

Prevost: I used to be a very busy mom raising my children and was really not involved at all politically locally, but I kept up with what was going on nationally. But my wake-up call was when Obama started running and he started talking about radically transforming America and all kinds of alarm bells went off in my head.

I mean, it was terrifying to hear what he wanted to do. So I started becoming educated. I got involved in local groups. I read everything I could get my hands on. Listened to the podcast. And that’s how I came across Steve Deace and his writings and his podcast and just became a huge fan.

And that’s why we’re inviting him back. He was here last February 2020 and did a co-event with the Family Action Council of Tennessee. Was very well received. And we’re just delighted that he is willing to come back.

Henry: There does seem to be something about sort of this idea that’s inherent in self-governance, self-responsibility, and self-control. The trade-off here is that as long as we’re here with this premise of a limited constitutional government, something somewhere in society has to sort of constrain the fleshly desires of men.

At one point in society, these lessons of virtues and values used to be taught by a multitude of faith communities all across the spectrum. All sort of commonly agreeing upon this idea of stabilizing society because it’s better for everyone to create better and more moral individuals.

I guess what I’m asking here, Pam, is if there’s anyone thing you hope someone takes away from this kind of conference and what would that be?

Prevost: You know they say that politics flows down from culture. Culture flows down from the church. And that’s really what the problem is when you boil it all down. Our churches are not leading. Our men are not stepping up.

Our slogan for this conference is “it’s up to us.” We have got to get in the public square, standing strong as we can do and standing for good and against everything that is not good and that is, in fact, evil in many cases.

Henry: What’s the reaction been like so far when you tell people about this?

Prevost: We’ve had so much interest. We’ve had just a swelling of support from all across the state. We have groups coming from Memphis and from the Chattanooga area. We’ve got support on our committee of all the surrounding counties. So we are really, really excited.

I think people are really concerned. They’re awakening. They’re discouraged and they really want to know how they can make a difference and who to listen to, where to get their news, and what they can do. I think that we are really becoming concerned about the direction our country is going in and how fast things are changing.

Henry: One place to get your news is either The Tennessee Star Report or thestarnewsnetwork.com. Quick shameless plug right there.

Henry: But I know, Pam, you have an incredible guest speaker at this reception dinner speaking afterward as well. Give our audience a bit of perspective about who that person is and what their story is?

Prevost: Yes. We’re hoping that you’ll go to the website and consider being one of our donors and come to the evening event to be able to hear our guest speaker, who is Charmaine Hedding.

She will be here from Telev, Israel. She’s coming from Israel. And she’ll be talking about the amazing work her foundation, the Shai Fund, is doing right now in Afghanistan, rescuing Americans and persecuted Christians and getting them out of there.

She’s been working in the Middle East under cover for about 15 years. It will be riveting and incredible to hear from her in real-time about what’s going on. I’m sure, very inspiring. Please go to our website and consider becoming a donor and getting to hear Charmaine Hedding. We are privileged that she wants to come and speak to us.

Henry: That website is Truthbetoldtennessee.com. And Crom, did you have a question here, too?

Carmichael: I wanted to make sure she mentioned going to the website. Let me just say this, I don’t know much about the organization, but that speaker sounds absolutely fabulous. And the list of people that she said will be at the main event is also great. That’s a great list of people.

Henry: I’ll tell you who actually makes me think of is Victor Frankl. I speak about him quite often, but he really just touches me because I think Victor Frankl’s best understood as he is juxtaposed to other psychoanalysts of the day.

If Freud seemed to think he figured out humanity because he said, what motivates a man, his drive for pleasure. That’s just hedonism. And we’ve done that before. Adler said you motivate a man by his desire for powers. Well, that’s fleeting. I’m going to get weak one day.

But Frankl, he’s a survivor of the Holocaust. And while he was in the concentration camp, he developed his theory of life, saying how you truly motivate a man, what life is really about his purpose. It’s meaning.

What are you doing with your life? And, Pam, I guess, is that some sense of what you’re trying to touch on as well? What’s our purpose in this life? How do you find real meaning in our society?

We really need to get back to what really works. We need to conserve the principles that have been time-tested and proven to work. And those principles actually come from our Judeo-Christian heritage.

All of our Founding Fathers may or may not have been Christians. Who knows if Thomas Jefferson was. But they all agreed and studied history and knew that Christian principles work for a moral society.

Henry: Ben, do you have a question there?

Cunningham: Pam, Ben here. A lot of people are discussing the role of the church these days, and there’s a lot of folks that think the church should get more active. Is that a topic that you’re going to talk about at the conference?

Prevost: We are. We actually are going to be talking about that. And there’s a way for the church and for Christians to be involved in the public square in the right way. And we are called to do that.

And some people that are truly leading the way in that are my Tennessee heroes, Bobby Patray with Tennessee Eagle Forum and David Fowler with the Family Action Council and so many others.

And we just need to follow their example and get involved and stand up to what Daniel Horwitz called ‘judicial supremacy.’ We’ve got to learn to be overcomers of evil and not overlookers. Because if we don’t, we’re going to be overtaken and not even realize what has happened.

Prevost: We really need to wake people up, and I think people are becoming more awake and they want to know what to do. We don’t only want to educate people.

We want to really motivate people and encourage them. There are so many wonderful local groups in Tennessee doing amazing things, and I know I don’t have time to name them all.