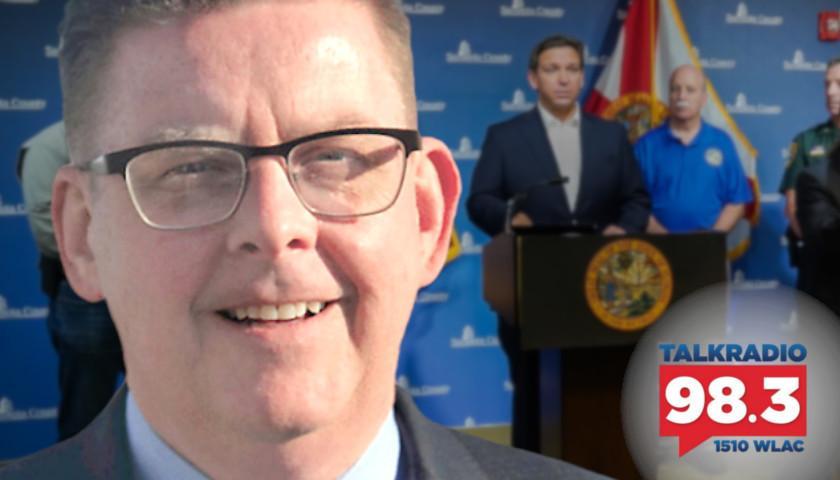 Live from Music Row, Tuesday morning on The Tennessee Star Report with Michael Patrick Leahy – broadcast on Nashville’s Talk Radio 98.3 and 1510 WLAC weekdays from 5:00 a.m. to 8:00 a.m. – host Leahy welcomed national political correspondent for One America News, Neil W. McCabe, to the newsmaker line to discuss Florida Governor DeSantis’s hardball with Disney and his rumored run for the presidency in 2024.

McCabe: Good morning, Michael. Very good to be with you, sir.

Leahy: And by the way, you are here thanks to your employers at One American News Network on the web at oann.com. We thank them for letting your wisdom come to our listeners.

McCabe: Yes. And people always ask, where can I find OAN? And there’s an app they can download, and it’s the bee’s knees. It’s fantastic.

Leahy: So let’s talk about your governor down there, Ron DeSantis. You are the top gov tracker. You’ve moved down to Tallahassee to keep track of him. He had, I think I would say, a big victory with Disney.

The woke CEO there that kind of tangled with him and didn’t do so well. Bob Chapek has been fired, and they brought in the old CEO who is the new CEO, Bob Iger. Isn’t that a big victory for DeSantis?

McCabe: When you consider people make this joke, right, go woke, go broke. But literally, Disney’s stock is down anywhere from 30 percent to 25 percent right now. And people are saying, hey, what just happened? That’s not a very good year in your first year as CEO.

The guy they’ve replaced was the guy who was in charge of the parks, and he was supposed to be; now that COVID was over, they were expecting this big push for the parks, and he basically stumbles into a fight with DeSantis, which is kind of always a mistake. (Chuckles)

DeSantis is not some pushover. And he just said, okay, fine. I’ll just take away all your tax benefits and that special municipality that you guys run where you basically are your own kingdom, the Magic Kingdom was literally like feudalism, where they literally owned the land, and they ran it like it was their own town. DeSantis took all that away too.

Leahy: For Disney, after they kind of took on unwisely Governor DeSantis, it turned out to be not so magic of a kingdom for Disney.

Leahy: Tragic! Aaron Gulbransen has a question for you. Neil.

Gulbransen: Hey, Neil. How are you, sir?

Gulbransen: I have a question for you. This is just out of curiosity. Of course, we all know how what a big company Disney is and everything, but as an example, before I ask the question, there are two or three rails in Virginia politics off the top of my head.

One is transportation and the other is changing the state from an ABC liquor license to a non-ABC. Neither of those things is going to have any action taken on them. I would imagine Disney felt secure for a long time because they probably considered their tax status to be one of the third rails of Florida politics. Is that a fair assessment to make from an outsider?

McCabe: Yes, DeSantis has made reference to this, whereas basically, he points blank said Disney has paid off the politicians for the last 100 years. And basically, he just doesn’t care. Like Trump.

When it comes to contributing when the donors threatened Trump,  he just says, I don’t care. And that’s what DeSantis has learned from Trump.

Leahy: You brought it up. DeSantis. Trump. DeSantis, Trump.

Leahy: Yeah, I know. We got to jump into this 2024 election when Donald Trump announced. And then the crooked Department of Justice set up a special prosecutor to look into the little paperwork issues that they are trying to generate after he left the presidency.

The special prosecutor, Jack Smith, the same guy that was working with Lois Lerner to stop 501 (c) (3) nonprofit status for the Tea Party. That guy. What’s going on? Here’s how I see the 2024 contest for the GOP nomination. It’s Trump-DeSantis and the munchkins. I say the munchkins. It’s all the other folks.

Leahy: They all went out to this Republican Jewish Coalition in Las Vegas and they sort of gave their pitches. How do you see all this play out?

McCabe: I remember in 2015, I was having a few drinks after a Bernie Sanders and Hillary Clinton debate in Iowa.

Gulbransen: As one does after that debate.

McCabe: I went out on a toot and talked to one of the three, basically, Bernie Sanders had three top senior advisors. One of those three guys was talking to me, and I’m like, so why are you guys giving Hillary Clinton a hall pass on the emails? And he goes, well, first of all, you attack Hillary, it just blows back worse at you. So there’s no point attacking Hillary because no one plays the victim better than her.

Listen, the FBI is investigating it, and if there’s something the FBI will take care of it. He looked at me and said, either we have an FBI or we don’t.  And basically, Sanders’s strategy was basically to play it cool on the emails and let the FBI throw her in jail. Well, guess what? We don’t have an FBI.

Leahy: (Laughs) Not at all.

McCabe: But when it comes to Republicans, the FBI can be very effective and relentless. And so do people think that the FBI will take care of the Trump problem for them? I think a lot of people are hoping that.

There are a lot of Republicans hoping that their buddy Merrick Garland will do them a solid and throw Trump in jail or so bloody and confuse him. Or basically create so many process crimes. There’s no underlying crime.

McCabe: Right. One day I want to go to Quantico just to talk to one of those FBI instructors and ask so how do you set up the perjury trap.

McCabe: I want the textbook. So this is the way it goes. DeSantis is not going to announce until he’s sworn in for his second term. And I can tell you, with lead pipe certitude that the announcement will be at a place that is considered quite sacred and holy for conservatives and Republicans. And then it’s game on.

Leahy: So you have the inside scoop. I’ve been thinking that DeSantis wouldn’t announce until May or June or later because you can just kind of wait and see what Donald Trump does, and meanwhile, he runs the state. It sounds like you have some inside sources on all of this.