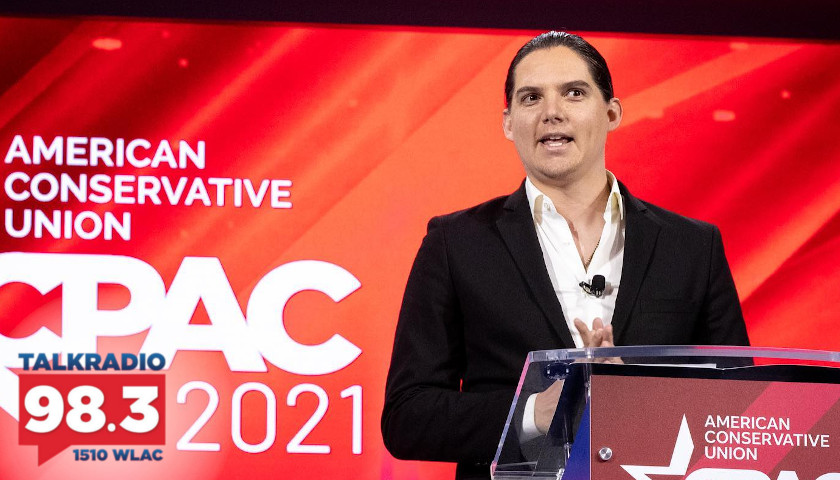 Leahy: In studio, Robby Starbuck is with us. Good morning, Robby.

Starbuck: Good morning. Thank you for having me.

Leahy: We just ran up the stairs.

Starbuck: We sure did.

Scooter: You guys need a little time to catch your breath? I got some perfect music.

Leahy: Robby needs less time than I do.

Scooter: I got here specifically at this time to make sure we got our exercise. It was one of those things, you know, where you hit every red light, every single red light on the way here.

Leahy: I do that some mornings.

Scooter: It happens. But in the nick time.

Scooter: I’m looking over and I’m in the last element in our thing here. And I’m like, uh oh, they’re not back. This is going to get weird.

Starbuck: Thank you for having me. I’m very excited to be here. I know that pretty much all of my neighbors are in love with this show. The where they were very excited.

Starbuck: They do. They’re smart people.

Leahy: This is your first time in studio.

Starbuck: It is. It is. So I’ve been on a couple of times, but this is the first time I made it here for the full show.

Leahy: It’s totally more fun to be in studio.

Leahy: Even if we have to race up the stairs.

Starbuck: That makes it more fun.

Leahy: So that Scooter doesn’t have dead air when he opens up the show.

Starbuck: Well, tell me it’s not memorable. We’ll never forget the first time I was in studio.

Leahy: We will remember that. So Robby Starbuck, you have announced that you’re running for Congress in the Fifth Congressional District. Tell our listeners a little bit about yourself.

Starbuck: So if you don’t know me already, I started out sort of making my name in Hollywood as a director, producer. I directed and produced some of the biggest stars. Oscar-winning actors, actresses.

Starbuck: Yeah. It’s not as cool as it sounds. That was where I had to make that decision to come out as a conservative. And it was a no-brainer for me because my family came from Cuba.

Leahy: Where in Cuba is your family from?

Starbuck: Ciego de Avila? It’s kind of a rural area. It’s not by the beach.

Leahy: And when did they come out of Cuba?

Starbuck: It was in the 60s. They all came at different times. So I can give you, like, one year, because the nature of it was like, say, like my grandpa. My mom came first, but my grandpa was held for a few years.

And the State Department had to get him out. So it was all in different stages, and some of my family members never got to leave. Some of them have died in Cuba, and some of them are still stuck there.

Leahy: Now, did your father come from Cuba?

Starbuck: No. My dad didn’t come from Cuba.

Leahy: Where’s your dad from?

Starbuck: I think he was born in Oklahoma.

Leahy: So your mom came here in the 60s? Where did she live when she first came here?

Starbuck: Florida. So my family started over completely. I mean, they lost everything. Even my great-grandpa started over as a janitor working two jobs.

Leahy: So they came with nothing. They had assets in Cuba.

Starbuck: They had their home stolen, their car stolen, every possession they had. I mean, for people that don’t know the history of Cuba, I mean, they took everything at gunpoint, and that’s it. You get to come with your shirt on your back. There was a legal process for it. They follow that process.

Leahy: A legal process for stealing your property.

Starbuck: Exactly. A legal process for stealing your property and then kicking you out basically.

Leahy: That could never happen here.

Starbuck: Oh, yeah. You know what? That’s the reason why I came out because I saw that there were all these steps that my grandparents, my mom had warned me about my entire life, about how this happened. How did we get to that place?

Leahy: How old was your mom when she came here?

Starbuck: And so for them, it was one of those things where they were far enough away, where nobody had really pushed up on them. And I think this is one of the things people can kind of relate to now is if you feel like it’s not at your front doorstep yet and you see the stuff happening right now in society.

Starbuck: One of the biggest regrets you’ll hear from Venezuelans and Cubans is that not enough people stood up. They kept waiting, thinking it’s not going to hit my doorstep.

Leahy: And then it did.

Starbuck: And then it did.

Leahy: Venezuela. I’ve been to Venezuela before.

Starbuck: It was awful.

Leahy: It was a great, beautiful place way back. Way back in 1972, 73. I guess it was a long time ago. You weren’t even born then. (Laughs) So where did your mom and dad meet?

Leahy: Southern California. And now what did your mom and her parents do for a living in California?

Starbuck: My grandpa ended up doing insurance. Super exciting. He was in insurance sales.

Leahy: We have a lot of insurance people listening to us.

Starbuck: I was being serious. It is super exciting. I mean, the stories that he has about his time and insurance is actually some exciting about that. For instance, a lot of people don’t know there are tornadoes in California. That was something that most people have no idea about. But there are tornadoes.

Leahy: I didn’t know that.

Starbuck: And so there’s a certain amount of tornado damage every year. I always found that interesting. So he got a job in insurance.

Leahy: What did your mom do? Did she go to college?

Starbuck: She was in real estate. Was actually the first person to go to college.

Leahy: So your mom’s in real estate and your dad in a meet and West Covina? And they get married. Where did you grow up? I grew up partially in Temecula.  So my childhood is a little interesting. I graduated at 16.

Starbuck: So I actually left home and had simultaneously finished my first year of College in a gifted program in California.

Leahy: Are you gifted Robby?

Leahy: We have a gifted person in here.

Starbuck: What’s really interesting about it is that the program is now being trashed in California because they say that program is a racist because there are too many Asians in the program.

Leahy: And so your mom is Cuban. And that program, from what you graduated, is now being trashed as racist.

Starbuck: It’s being trashed as racist. And another kid, let’s say, who has sort of accelerated learning and is ready to move ahead faster, won’t be able to anymore. They’re gonna be pushed back.

Leahy: They got to move it back. Dumb it down right?

Starbuck: I mean, I thought we were supposed to celebrate exceptionalism and like wanting to push ahead.

Starbuck: We should. We always should.

Leahy: I don’t know what this thing is we’re in right now.

Starbuck: It’s definitely not that. It’s the antithesis of it. So I left at 16 and essentially started my life.

Leahy: So let’s go back. What did your dad do for a living? He was also real estate.

Starbuck: Temecula was the initial place.

Leahy: And Temecula is where in Southern California?

Starbuck: It’s kind of about an hour, 15 minutes north of San Diego.

Leahy: So is it Orange County?

Starbuck: No, not Orange County. No, it’s Riverside County.

Leahy: Where was the special program?

Starbuck: It was all over the state of California so you could qualify for it.

Leahy: You graduate from high school at 16 Temecula, and you’ve got your first year of college. What happens then?

Starbuck: I went to work while doing college for a guy named Brad Greenspan. He started a site called MySpace.

Leahy: So you were working for MySpace.

Starbuck: Not only that, but he had a website called Live Video. It was the first video streaming website on the Internet. And everybody thought this was a crazy idea.

Leahy: So you were going to college where I was going at the time.

Starbuck: I ended up switching to Saddleback, which was a college where I was able to work and then go to school.

Leahy: Where did you start?

Starbuck: Saddleback, Orange County. And I was able to work there like it was my work.

Leahy: So you were in Orange County working for the MySpace folks, working for Brad. And he had a couple of different websites. So did you work just for MySpace or for other websites,

Starbuck: It was a whole company. A bunch of different things. So we produced original content, original shows.

Leahy: I mean, when you say you work for him, did you write code?

Starbuck: No, I was producing shows.

Leahy: How old are you?

Starbuck: 16. So how do you monetize all this stuff on the Internet?

Leahy: How do you connect with Brad.

Starbuck: Through a recruiter. Actually, a guy named Trent, who I’m still really good friends with today, who I flipped from being a Bernie Bro to being a Trump voter. He was my recruiter. He recruited me there.

Leahy: How did you connect with this guy?

Leahy: Had you done some video stuff?

Starbuck: I had done some video stuff, and I had sort of large social media already then. And I think that’s how he found me. That’d be my guess. That was my assumption.

Leahy: Was there a MySpace office or did you work out of your house?

Starbuck: There were multiple. So there was an office for E Universe, which was the parent company. And then you could work from home, work from the studio if you were shooting stuff. It was very free.

Leahy: Where was the universe located?

Starbuck: There was an office in LA. and then there was a satellite office in Orange County.

Leahy: Did you work in the satellite office?

Starbuck: I did both. It was depending on what we were doing.

Leahy: How old were you when you did this?

Leahy: Are you thinking, how did this happen?

Leahy: Was it because you were gifted? (Laughs)

Starbuck: No. You’re never going to forget that.

Leahy: Yes. Every time we introduce you, ladies and gentlemen, the gifted Robby Starbuck. (Laughs)

Starbuck: No, no, actually, I wish they had a different word for those programs.

Starbuck: No, I know. It was really funny the first time I met with Brad was like, look, the weird thing for me here is like, don’t talk about your age with people because they’re gonna feel really weird answering to a 16-year-old. So you just look young. It was like this thing at work that you just didn’t talk about.