Mayor Andy Ogles Discusses the COVID Vaccination, Data, and the Right to Choose 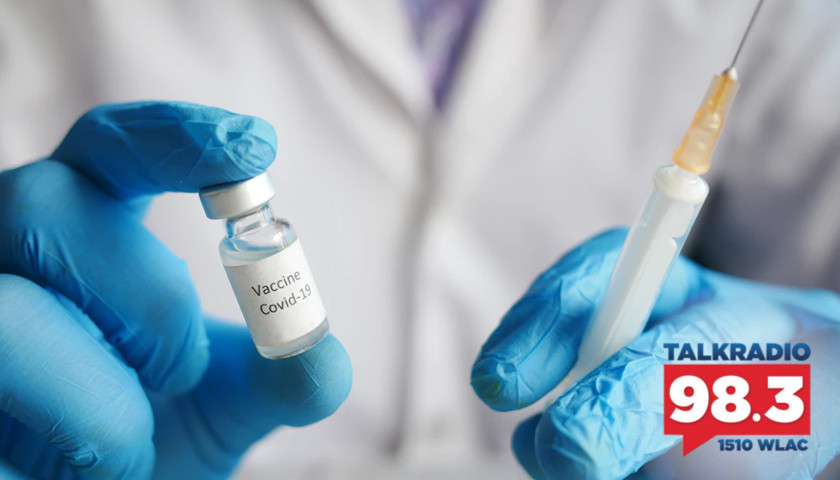 Live from Music Row Tuesday morning on The Tennessee Star Report with Michael Patrick Leahy – broadcast on Nashville’s Talk Radio 98.3 and 1510 WLAC weekdays from 5:00 a.m. to 8:00 a.m. –  host Leahy welcomed Maury County Mayor Andy Ogles in the studio, who weighed in on the weaponization of COVID, a person’s right to choose whether or not they want the vaccine, and lack of testing at the border.

Leahy: We just brewed some fresh coffee for Mayor Andy Ogles. How did we do? How did the coffee do?

Leahy: Is it good?

Ogles: It’s hot off the press. It’s got a bite to it. It’s a good, rich, dark cup of coffee. And it’s not two days old and stale. I nuked it.

Leahy: My status has moved up in your eyes, Andy?

Ogles: That’s it. Last week I was actually concerned we do get food poisoning from the coffee. I don’t even know if that’s possible, but if it had been possible, it would have been last week.

Leahy: So when Grant Henry comes in at seven o’clock, we’re going to try. What I did is I went with, I’m sorry to say, the very low-rated on the 2nd Vote website, one point seven, meaning almost as lunatic liberal as you can possibly get, Starbucks.

I went with the standard Starbucks house blend, mostly because that’s what I typically drink. And so I think I did a decent job on it. It seems to me to be a little bit weak. But then again, I like strong coffee.

Leahy: There we go. I think that’s what we’ll do next. When Grant comes in at seven, I’ll make him some Tri-State blend. It’s called Tri-State.

It’s made by BROASTTN out of Cookville. And the Tri-State blend is a salute to the three areas of Tennessee, three regions of Tennessee, west, middle, and east. I think it’s Guatemala, Brazil, and Ethiopia that are the three countries.

Leahy: Very good. So we’ll try that. Grant, as you come in, you’re going to have the Tristate Trio from Tennessee. And by the way, if you’re out there listening and if you are a coffee roaster here in Tennessee or anywhere in the United States, call us! 615-737-9522.

And we will test out your coffee on the air. And if it’s great, we’ll say it. And if it’s not great, we won’t say anything. How about that?

Ogles: We’ll lift up the ones that are great.

Leahy: We will lift up because we are positive people here.

Ogles: In the age of COVID we need some positivity. And I just shake my head before the break. We’re talking about Andrew Cuomo and some of the things he’s doing. It’s insane that we’ve gotten to this point where COVID is now weaponized.

Leahy: It totally is. Let me read this and get your reaction to this. This is from the Breitbart story about Governor Andrew Cuomo and his totalitarian authoritarian statement. He’s going to force people to take the vaccine. Go to their houses, put them in cars, and put that jab needle in their arm.

Hmmm. Here’s from the story. Recent surveys suggest unvaccinated Americans remain firm in their decisions not to get a Coronavirus vaccine. Many of them cite concerns related to vaccine development.

As Breitbart reported, 81 percent of Americans who have not received the vaccine yet say they will probably or definitely not get the shot. President Biden has also floated knocking on doors to pressure Americans to get the jab. Your reaction, Andy?

Ogles: Let’s put all this in context. The tale of two states. You have New York versus Florida. It was Cuomo who ordered nursing home patients back to nursing homes with a fatality rate that was off the charts.

Leahy: As if to illustrate how crazy the Biden maladministration is, earlier this week, the news broke of the highly partisan Department of Justice announced they will not continue the investigation into those terrible policies in four blue states run by Democratic governors who did exactly that. New York, Michigan, New Jersey, and Pennsylvania.

Ogles: And so now what you have – the media has totally erased this error. Again, we knew from the beginning that it was serious. I mean, let’s be honest. You have those out there, they get it. They get ill. And in some cases, right now, I think the 30-day case death rate is about point six-tenths of a percent.

But so there is some risk there. If you are high risk, go talk to your doctor. If you want the vaccine, it’s a free choice. And that’s key. But now you have over at CNN, the liberal news network. Don Lemon, the news anchor.

We now have two classes. We have two economies, two sets of people within a society. We’re going backward, folks, not forwards.

Leahy: Also, the issue of unvaccinated. I mean, you get into a lot of these details. Because I’m 66 years old and that’s in the high-risk category just by my age. I looked at the downside, and I looked at the upside, and I concluded for me, I’m getting the vaccine. But that was me.

Ogles: That’s right. The people – if you for instance, if you’re 66 and you’ve had COVID and you have the antibodies, there are some reports that say you may be at greater risk if you get the vaccine than if you don’t.

So somebody who’s had COVID, just because they’re not vaccinated doesn’t mean that they’re at higher risk of getting it if they’ve already had it.

Ogles: I have people in my immediate family who’ve gotten vaccinated. And who I encouraged because they were in high-risk categories, right. Their health history, their medical conditions, their preexisting, their age, or whatever the circumstances are, it made sense for them. I choose not to.

And so when I’m in a crowd, I social distance. I use lots of hand sanitizer. I take those precautions for myself and for others because it makes sense for me. And that’s a personal choice not to get it. But at the end of the day, this is about freedom and liberty.

And we have too many politicians who have abused their authority. They declare people essential or non-essential. They shut down businesses, they limit access to worship. And now we have politicians thinking that they’re doctors, giving us medical advice, telling us to – and not to – do things.

You know what? If you have a question, go talk to your doctor. It’s between you and your doctor. And the politicians need to go run their state, run their counties, and quit trying to give medical advice.

Ogles: I think the counterargument that is at least one of the vaccines is only 38-39 percent effective against the Delta variant.

Leahy: Exactly. I think I read that about the Pfizer vaccine.

Ogles: This is just us speculating, right? When you look at the rise of the Delta variant out of India, I do believe that you’ve had across the United States and elsewhere, quite frankly, who would represent the greatest number of outsiders?

Outsiders being from outside the United States in this last period of time, three months, six months, or whatever. It’s clearly going to be our southern border.

Ogles: We don’t have a wave of people from India or Europe or such traveling into the United States because of all the travel restrictions.

Ogles: Except the Southern border.

Leahy: No travel restriction if you’re untested for coronavirus and you illegally enter the country south of the border. And in fact, the official policy of the Biden maladministration is to allow you to become a vector to spread whatever you have.

Ogles: And to put a fine point on it, it is documented now that if you’re coming across the Southern border and you’re being transported by the U.S. government, they are not testing people for COVID.

Leahy: They’re not testing them. Hmmm, what could possibly go wrong?