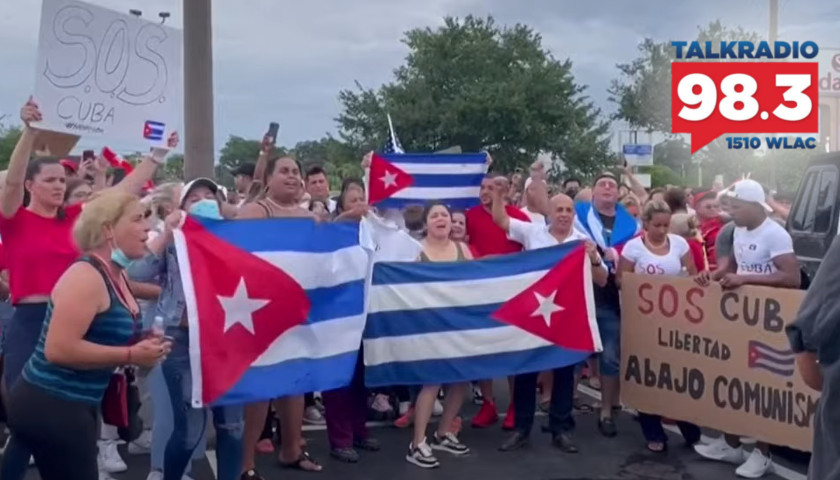 Live from Music Row Tuesday morning on The Tennessee Star Report with Michael Patrick Leahy – broadcast on Nashville’s Talk Radio 98.3 and 1510 WLAC weekdays from 5:00 a.m. to 8:00 a.m. – host Leahy welcomed Grassroots Engagement Director of Americans for Prosperity-Tennessee Grant Henry and Maury County Mayor Andy Ogles in studio to review false narratives regarding the Cuban protests and questioned whether Americans value their freedom as many were seen marching with American flags.

Leahy: That’s the current Secretary of State Antony Blinken, the poster child for the beta-male of American foreign policy under the maladministration of Joe Biden, formerly with that esteemed law firm Winken, Blinken, and Nod. Obviously, the guy is not ready for primetime. All these things going on in Cuba and all you hear from Biden and Blinken is, don’t do that.

Don’t do that. Marco Rubio, the Senator from Florida, hitting back a lot harder. I don’t know why it’s so hard for the Biden administration to criticize Marxism.

Grant Henry and Andy Ogles in here. Grant, with Americans for Prosperity of Tennessee and Andy, mayor of Maury County. Here’s the story, Grant. I want to get you reacting to this report. Communists beat a dissident Cuban priest, drag him through the streets.

A Cuban priest reportedly remains in police custody as of Monday after police beat him, dragged him through the streets, and stripped him in his native Camagüey, Cuba for supporting peaceful protests. What do you make of this, Grant?

Henry: Here’s my statement. I actually wrote it last night. May God bless the brave Cuban freedom demonstrators standing up to their totalitarian Communist government.

It’s quite telling, actually, to watch Bernie Sanders, AOC, and the hard left who normally comment on everything, who say nothing now.

And it’s ridiculous to see mainstream medicine shortages and high prices. Note, the American flags, the anti-Communist, pro-freedom signs at the protest.

This is the grassroots uprising by courageous people who are risking prison, beatings, and even death in the hope of freedom.

I say, “what an inspiring sight.” And that’s a quote I got from a great man who shall not be named Michael. But I think it’s quite fitting for right now.

Leahy: (Laughs) Andy Ogles, mayor of Maury County. Bernie Sanders, a great proponent of communism and socialism – the guy that spent his honeymoon in the Soviet Union.

That gives you the idea of what kind of guy this was. He’s praised the Castro regime in the past. Where is he on all of this?

Ogles: I think when you look at the current education system in the United States and why critical race theory in this new agenda of propaganda that’s crept into our schools is such a problem because by rewriting history, we don’t learn from history.

And so you look at when the Bolsheviks, and the revolution that took place between 1917 and 1923, were revolting against the oligarchy.

And then the moment they seized power, they destroyed everything that they talked about. You fast forward to 1934, the three-day purge, the Night of the Long Knives, and when fascism swept Germany. We know how this story ends. It’s like the Bible. I read the end. I know the outcome. And you look at Russia, you look at Germany, you look at Venezuela, and you look at Cuba.

Marxism, socialism, and Faucism, whatever you want to call it, does not end well for freedom. And we’ve got to stand up to these governors that are more interested in photo ops. And they are a substantive change and fighting and are destroying our country by their complacency.

Leahy: There’s a story at Breitbart by my colleague Alana Mastrangelo. Over the years, there’s been no shortage of woke left-wing celebrities like Steven Spielberg, Jay Z, Beyoncé, and Katy Perry, who have vacationed in Communist Cuba normalizing and spending their money in a country with a government that controls the flow of money as well as brutalizes and murders its own people.

Grant Henry, with Americans for Prosperity of Tennessee, what’s your reaction to that?

Henry: Look, I think we’re in a time of the Orwellian sort of foreshadowing of prediction that the heresy of heresies is common sense.

Do you know what I’m saying? We’re now in the time where even to question something in the realm of common sense is a heresy.

And I think that’s part of the allure. Conservatives would do ourselves justice to admit the fact that communism on paper is a presentation of a utopia.

Look, you are not a perpetual victim. You are not some liability that needs to be taken care of. You do not have to constantly and continually subsist upon the handouts of the government.

You can do it yourself. You are empowered. You are strong. You can start that small business. I personally believe the creator of the universe has chosen you specifically for this time here now to have a talent that only you can do. If you plug that in properly, incredible things can happen.

Leahy: Andy Ogles, a little touch of irony here. Do you want to jump in here?

Leahy: Amen, brother. Preach it! Preach it, Grant Henry! Are you sure you’re a political guy?

Henry: What he’s calling me to.

Leahy: A little touch of irony here, Andy. Again, another story by Alana Mastrangelo, my colleague. She’s great, by the way, at Breitbart.

Twitter, I start off Twitter commenting on what’s going on in Cuba, already I’m laughing. Twitter describes the Cuban anticommunist hashtag as people, “helping to spread awareness of coronavirus.”

While thousands of Cubans were taking to the streets on Sunday to demand an end to the 62-year-old Communist regime and the #SOSCuba was trending, Twitter falsely described the hashtag as “people are helping spread awareness on the impact of COVID-19 in Cuba as cases hit an all-time high in the country.”

Ogles: I remember back in the day reading Huxley’s A Brave New World or Orwells 1984. And it was like, this is science fiction, right?

This is a parallel universe that could never come to pass. Then here we are in this era of COVID and we’re romanticizing Cuba?

Have you not been paying attention since the 1950s? That place has gone from a robust economy to devastation. And you’re going to blame America?

And it should be noted that the people that are in the streets crying for freedom, they’re waving American flags.

Leahy: Here’s another story from Breitbart. They were on a roll last night by my colleague Wendell Husebo. Grant, I want to get your reaction to this.  Joe Biden’s Cuba statement doesn’t mention beatings, shootings of protesters.

President Joe Biden issued a statement on Monday claiming to, “Stand with the Cuban people” against their repressive Communist regime, but failing to mention widespread reports of public gang beatings and live fire against unarmed protesters on the part of state security.

Not just in Cuba, but they did the same thing in Hong Kong. It gets me at my core. It’s a guttural reaction that I think sometimes are we worthy of that.

Honestly, has anyone listened to this programmer of Americans, step back and really ask yourself, are we truly worthy of other people fighting for freedom in the name of our flag?

Do we honestly believe in freedom that much? That’s a thing that will get you to your core if you really think about it enough.

Ogles: And part of this, too, is again, going back to Critical Race Theory. This is a big deal. It’s destroyed our country as part of that supplemental material here in the state of Tennessee.

Ogles: So we’re teaching children in America in the state of Tennessee, in Williamson County and in Middle Tennessee, to hate America.

Leahy: Well, I think a lot of the kids that graduated from those kinds of schools go on to report for The New York Times. Here’s another story at Breitbart.

The Times also erroneously reported the protests were about ‘food and medicine shortages.’ Grant, what do you think?

Henry: Again, that type of narrative is either purposely misleading, purposefully misleading at best, or malicious at worst. You get what I’m saying.

Leahy: Andy Ogles, here’s another one. In Cuba, police leave an AP photographer bloody after a public beating. Cuban authorities have cracked down on the international free press and mass demonstrations against the Communist regime, with police assaulting reporters and photojournalists in the crowd. Your reaction.

Ogles: You look at the state of our country and you look at people not wanting to respect the flag or to stand for the anthem and meanwhile, in Cuba, Venezuela, Hong Kong, China, and other parts of the world, they waive the flag because it means something.

It means hope. It means the opportunity. You have the right to disagree and not to be persecuted for it. And that’s the problem with the left, this double standard.

We are a Republic of free States. I’ve said this many times, I support California’s right to be liberal, to be socialist leaning. But at the same token, if you’re in Tennessee or South Dakota or South Carolina or Florida or Texas, you have the right to be conservative.

But they will persecute you, and they will censor you. They will try to silence you because that’s not how they view the world, nor do they value the Constitution.

Leahy: We’ll be back with more later. By the way, these Cuban protests, there are thousands in at least 16 cities who took part in these peaceful protests on Sunday.

So there is a movement going on in Cuba for freedom! Not a bad word. Freedom. That’s what we support here.