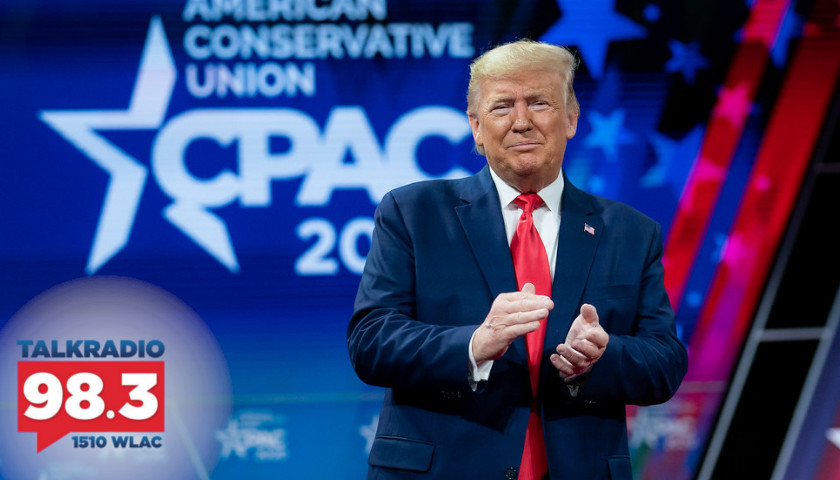 Leahy: In studio with us, our very good friend, mayor of Maury County, that bastion of freedom and turbocharged engine of economic growth, Andy Ogles.

Andy, over the weekend, while you were relaxing on Dauphin Island with your family – Did you get back during the weekend?

Leahy: You got back during the weekend. So you were able to probably watch the goings-on at the 2021 CPAC conference. The Conservative Political Action Conference. That got started, I guess, way back in 1973, right?

It’s almost 50 years now. I just have to bring this to you. We’re going to get to what former President Donald Trump said there and what his reception was.

Governor Lee was invited to go down there and he was on a panel. And I got to tell you the name of this panel. Wait for it … He was on a panel with another governor, Governor Stitt of Oklahoma.

And the moderator was Matt Schlapp, who is the president of the group that sponsors the Conservative Political Action Conference.

It was “A conversation on leadership, justice, and jobs in the age of wokeism.” (Ogles chuckles) Now, Governor Lee was there, and our headline tells it all.

It was like a 22-minute advertisement if you will. Schlapp was basically shilling for Governor Bill Lee and Governor Stitt of Oklahoma. Our headline:

No Questions for Governor Lee at CPAC About His Woke Cabinet Members Penny Schwinn and Juan Williams. We’ve reported on this extensively, but it was really of the 22-minute interview mostly about Governor Lee’s criminal justice reform program.

Which, I think criminal justice reform is fine. But they didn’t ask him any questions about his own woke administration. I felt, generally speaking, that CPAC is gone. Well, it’s not quite the pure conservative experience that it was back in the era of Ronald Reagan and leading up to Donald Trump. That’s just my view.

Ogles: Yes. I think when you look at an event like that, it’s not really a journalistic event. There’s no investigative reporting, per se.

And I think for someone like Matt Schlapp, he reads the press releases, and probably from their perspective, the governor is – or appears to be – conservative.

But my guess is, they didn’t scratch the surface to see that Penny Schwinn and the others and its plural in his administration have gone full awoke and really nothing’s been done about it.

Leahy: So I’m going to try to get on Matt Schlapp in here because I’m going to ask him these hard questions. And I think he knows. (Laughter)

I think he knows that Governor Bill Lee is no conservative. He’s more of an establishment Republican guy. He was a deputy policy advisor in the George W. Bush administration.

But that’s just my view. But the world in 2021 is about where this country is today, and if we can make America great again.

We did a great job I think for the four years that Donald Trump was the president of the United States. Now, with the legal but not legitimate occupant of 1600 Pennsylvania Avenue, who is flouting and violating our immigration laws, looks pretty troublesome.

Former President Trump went down to CPAC, and it was a barn burner. He was very well received.

Ogles: He was kind of the crescendo, the highlight, the grand finale of CPAC. He spoke on Sunday. And, of course, they had a straw poll. Now, keep in mind, CPAC attendees are going to lean conservative.

Ogles: Trump just dominated that poll. And with Ron DeSantis coming in a distant –

Leahy: I think it was Trump at 70 percent. They do the presidential strap polls and they’re more kind of fun than anything else, I think.

They’re not typical scientific polls or the electorate. But among enthused conservatives who attended CPAC, it was a runaway. We want Donald Trump for 2024 – 70 percent, and DeSantis got 20 percent, and nobody else even got one percent.

Ogles: It was crazy. I was surprised that Kristi Noem – I’m a fan of Governor Noem’s – she didn’t even register on the radar. And it’s not a scientific poll.

But that being said, when you look historically, Reagan got traction there and Rand Paul when he launched his presidential bid, Ted Cruz.

They really kind of spoke to the base to get some of that traction and some of that initial momentum. So it has validity, at least in the beginnings of a campaign. But that being said, it was Trump’s moment for sure.

Leahy: Trump’s had a lot of moments of late. Except, Andy, you can’t find any of these recent moments on YouTube. Did you see this?

Ogles: Oh yeah. They took down his speech, which was Orwellian.

Leahy: It is Orwellian. This claim that they are fair arbiters of public discourse, what a joke that is. They can’t take a punch, shall we say.

And they won’t allow anybody to take a punch at them, even though it’s well deserved because there are a bunch of Big Tech bullies.

Ogles: And I think there’s a growing appetite in Congress to do something about big tech and maybe to treat them more like a utility. And, of course, that’s not going to happen the next year or so.

But after the 2022 midterms and Republicans sweep both Houses of Congress, if I’m Big Tech, I would expect to be broken up in some way or capacity. Because I think that’s coming and it’s coming hard and fast.

Leahy: Well, that is interesting to see how this will all play out. I’m hearing increasingly that the general populace is very very tired of all the overreaches of the Biden maladministration.

That’s what I’m hearing. And I think on our side, I’m hearing and seeing resilience and enthusiasm for taking back the House of Representatives and maybe even the Senate. Even though now that is still 16 months away. It’s a long time.

Ogles: But, I mean, everybody’s getting geared up. I think more people are paying attention. Anecdotally you look at Moms for Liberty Group out of Williamson County.

Those types of liberty groups are popping up all over the country. And it’s individuals. You’re going to expect someone like myself or you to be engaged in politics and maybe be seen at some of these conservative events.

But when you have soccer moms who are busy and they’ve got agendas and kids and all the stuff that goes with that and suddenly they’re going to political rallies.

If you’re not a conservative, if you didn’t lead through COVID, you’ve got problems.

In a speech that lasted 90 minutes, the former commander-in-chief highlighted a variety of key areas that Republicans across the country are focused on including the 2022 midterms, the Biden administration’s policies, and his lawsuit.

He has a lawsuit against Big Tech platforms. With the help of everyone here today, we will defeat the radical left, the socialist Marxists, and the critical race theorists.

We will secure our borders. We will stop left-wing canceled culture, we will restore free speech and free elections, and We Will Make…here’s the punchline…

In 2020 he said Keep America Great, now it’s regressing back to the Orwellian Democrat dystopia. Will we make it great again, Andy?

Ogles: I think he’s handing out endorsements for the upcoming elections in 2022. And if you look here in Tennessee, it’s now July. Today’s date is the 13th and early voting in Tennessee starts in 12 months.

And so the election, whether it be governor or Congress or whatever, is a mere 12 months away. And I think that’s the case across the country.

And I think President Biden is the gift that keeps on giving. Every time he does something stupid, which is about every five minutes, it’s just a win for the Republicans.

It’s a win for Trump. This idea that they’re going to go door to door on vaccinations – I don’t think that works out well in rural Tennessee.