Maury County Mayor Andy Ogles Gets Back to Normal with MuleFest May 28 and 29 in Downtown Columbia, Tennessee 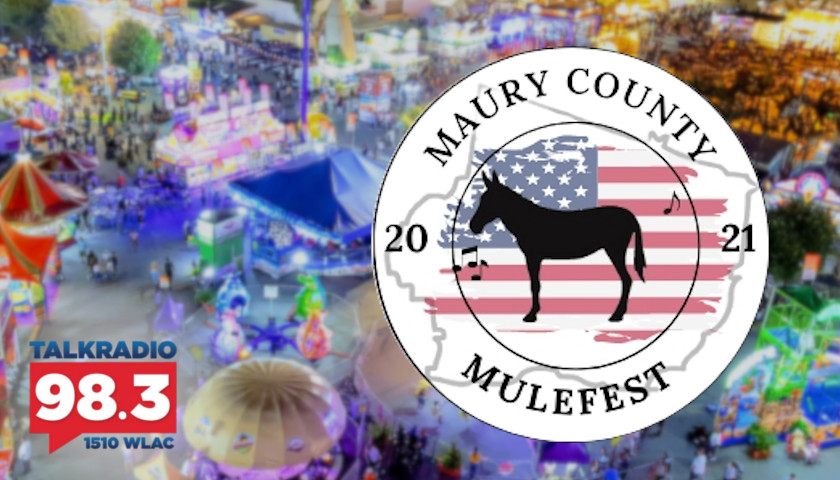 Live from Music Row Tuesday morning on The Tennessee Star Report with Michael Patrick Leahy – broadcast on Nashville’s Talk Radio 98.3 and 1510 WLAC weekdays from 5:00 a.m. to 8:00 a.m. –  host Leahy welcomed Maury County Mayor Andy Ogles in the studio to give the details on the upcoming celebration called MuleFest in Downtown Columbia, Tennessee on May 28 thru 29.

Leahy: We are joined this morning by our very good friend in studio by the Mayor of Maury County, Andy Ogles. Good morning, Andy.

Leahy: Well, I think that I’m not going to be walking across America like our guest in the five o’clock hour Izzy Israel. He lost 15 pounds doing that. He might start his new book, Walk With Izzy Diet Plan.

Ogles: Yeah, I’m not so sure. Hey, I’m all about being healthy, but I’m not sure I’m going to walk across America. (Leahy laughs) But I think he was trying to bring awareness to term limits was his deal.

Leahy: That’s his deal and I think he’s doing a good job making people aware of term limits. Now, I’m going to tell you something, and I think it’s time for Tennessee to get back to work and back to having fun. You’ve got something going on in Maury County that sounds like a lot of fun to me.

Ogles: We’ve got a huge and I do mean huge event coming up May 28 and 29. That’s Memorial Day weekend just to kind of put a pin in it. But that Friday night, Trace Atkins, country music legend, is performing a live concert and it’s free. It’s right there in downtown Columbia. And then the next morning, we have a parade.

And then Friday night and all day Saturday into Saturday night, we have musical acts from around Tennessee, names that you’d be familiar with, and three stages. That’s going to be amazing. But it’s time for us to get back to normal. It’s an outdoor event, so you can do it safely and socially distance and do all that kind of thing.

But Memorial Day is about honoring our veterans in particular, those who have fallen. And so we’re going to take some time to honor those who have served and fallen in service to our country. But in that, it’s an annual event we have some great sponsors. It’s sponsor-driven, but the support from the community has been amazing.

Leahy: It’s Maury County MuleFest in Columbia, Tennessee, from Friday, May 28 to Saturday, May 29. It will be held in downtown Columbia. Live music, unique arts and crafts, amazing food, and a cool parade. Call 931-375-4101 for information on how to be a vendor, a sponsor, volunteer or if you want to be in the parade.

At some point, we’ve got to organize and give everybody a number and do all those kinds of things. But it’s going to be a blast. And I am pumped about Trace coming.

Leahy: And you have quite a few few performers, too, don’t you?

Ogles: Yes. And right now we’ve got, like I said, three stages with over 20 bands performing. If I had had a little more time, I could have had at least two more stages because there were so many acts wanting to perform. But at some point, there’s only so many hours in a day, and it’s going to be a great event. And again, come out, bring a chair. We’ve got over 150, close to 200 vendors, food trucks, arts and crafts, plus Trace and everything. It’s going to be awesome.

Leahy: Time to get back to living.

Ogles: It is. I’ve got a Black Hawk that’s going to fly in and land. (Leahy chuckles)

Leahy: How do you do all this stuff, Andy?

Ogles: You just ask right?  The National Guard has been a great partner, the Army, and the Air Force. We’re still having some logistical issues with the airplanes coming over. (Leahy laughs) But I’m begging and pleading with the Air Force to get the timing to work out. But again, same thing with Trace, we had this idea of just having a celebration celebrating our community, celebrating those who have served, celebrate those who have fallen, and thank them for their sacrifice.

But in that just reaching out to those around us and saying, hey, would you help us? Would you participate? And Trace again, I can’t speak highly enough of him and his guys and his manager and road crew. They’re amazing people. And if you want to see a an amazing night, because this all started and I think I told you this a couple of shows ago that I reached out to him and we’re thinking about an acoustic set. He’d just be kind of low key.

He’d come out to do a few songs. And he was like, you know what, if we’re going to go, let’s do it, and let’s be loud. Let’s throw down. (Leahy laughs) He’s bringing in a semi-trailer with the whole stage set up. We’ve got two giant TV monitors bigger than this office that are going to flank the stage. It’s going to be cool.

Leahy: If you want to have fun and if you’re sick and tired of just being cooped up in your house wearing a mask, you know, going, oh, the sky is falling (Ogles chuckles) and you want to get back to living, this is the event to do it.

Leahy: MuleFest in Columbia, Tennessee. Two weeks from Friday on May 28, from 6 p.m. to 11 p.m. The featured act, Trace Adkins, and the following day the parade. Trace is the grand marshall of that parade.

Ogles: That’s right. He and I’ll be in the parade plus some other dignitaries.