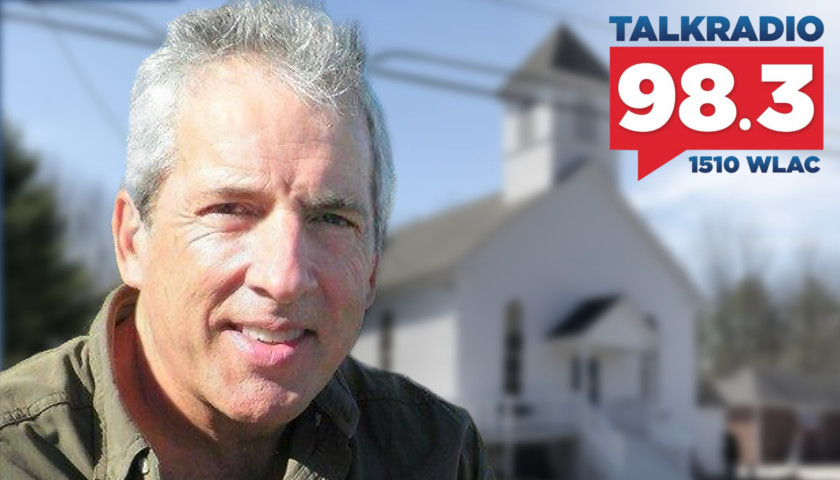 Live from Music Row Monday morning on The Tennessee Star Report with Michael Patrick Leahy – broadcast on Nashville’s Talk Radio 98.3 and 1510 WLAC weekdays from 5:00 a.m. to 8:00 a.m. – host Leahy welcomed retired attorney and blog creator of Misrule of Law Mark Pulliam to the newsmakers line to discuss his recent piece at American Greatness entitled Surrendering the Public Square where he sounds the alarm on churches going woke.

Leahy: We are joined on our newsmaker line now by our very good friend, Mark Pulliam, a California refugee and retired attorney. He moved to town in East Tennessee back in 2019.

He blogs at Law and Liberty. Mark, I am troubled as you are by the disappearance of Christian leaders from the public square. Tell us about your latest column on that.

Pulliam: Well, good morning, Michael. I’m always pleased to be here. What is going on in American churches is the same thing that’s been going on in other institutions in the United States. And that is the left is completing its long march through the institutions.

And this has been a goal of theirs since the mid 20th century. And they have managed to take over the Democratic Party, higher education, Hollywood, the media, Big Tech, and even corporate America.

But now the left is intent on taking over organized religions. And, in fact, many Protestant denominations have gotten woke. This trend has been apparent for some time, with the Episcopals, the Methodists, and the Presbyterians. Many of us in the South at least kind of look to the Southern Baptist denomination as being a refuge.

But even the Southern Baptist Church has gotten woke. And so my town has dozens of Baptist churches and we have visited many of them since we moved here looking for conventional and traditional Christian preaching.

And what we found instead is social justice being advocated and not just middle of the road social justice, but critical race theory, Marxism, left-wing politics, basically. And so I decided to write this piece.

And even as I was writing it, the Southern Baptist Convention was having its annual meeting in Nashville, a meeting that attracted 14,000 delegates. And at that meeting, literally days after this piece got posted a couple of weeks ago, they were going to pick their new President.

And they picked, in a contest between a liberal Ed Linton and a conservative, Mike Stone by a narrow margin, they picked the liberal. So even the Southern Baptist Convention seems to be headed down the wrong road, and it’s something that should be troubling to us all.

Leahy: You know, I’ve noticed the same thing. It is very difficult anywhere in America today to find a Christian Church that is not promoting the heretical critical race theory-social justice view of the world. That’s my opinion. Would you agree or disagree with my statement?

Pulliam: No. And I think many people agree with you. If you look at the numbers, the church attendance is declining, religious affiliations in America are declining. And the Southern Baptist Convention, which has been and continues to be the largest Protestant denomination, it’s declining.

Something different than this world. If they wanted to listen to leftist propaganda, they could tune into CNN or MSNBC. And when they go to church and they hear the same table being offered up, they decide, well, either I’m going to stay home on Sunday and sleep in, or I’m going to switch over to a non-denominational mega-church or fundamentalist church.

Leahy: There is. And I’m going to be blunt here, there is cowardice among many Christian leaders today in the country and at the local level. That’s my view.

If you were to go into one of these mainline churches that is promoting hat is promoting critical race theory, and you said, if you tell the preacher, well, you’re a coward and you tell the elders you are cowards and you’re heretical, what kind of response do you think you’d get?

Pulliam: Well, they would deny it, but it’s undeniably true, I think. And I grew up. I’m not ancient. I’m a boomer. But what you expected to hear from faith leaders is opposition to abortion, pornography is immoral, homosexuality is immoral, and drug abuse is wrong.

And now they’re silent. Or if they’re not silent, they are fighting homelessness or racism or promoting social justice and inclusion. It’s like they’ve turned away. What I titled my piece at American Greatness, Surrendering the Public Square.

That it’s not even like the liberals have pushed them out of the public square they have abandoned it voluntarily. And not only abandon it, have taken up the mantle of the left. The faith leaders in my town who have the most prominent public role are leftists.

One of them leads the local chapter of the NAACP. The other is a diversity consultant here. And this is in a county where conservatives outnumber liberals 70 percent to 30 percent or more. So where is our voice? I think a lot of them are sensitive to peer pressure.

They don’t want to be regarded by the voices in the media as intolerant or not being inclusive. And so they have trimmed their sails accordingly. Some of it you can look at as well, the seminaries are loading up younger pastors with this stuff.

Leahy: You put this link in your story to a group run by a pastor called Genesis Diversity Solutions. And I’m looking at this picture of the folks there. They’re about 20 people, two Black people, 18 White people in the picture of this group. They talk about our experience.

Here’s what they talk about. Racial equity and sensitivity. Creating healthy workplace cultures. Understanding our unconscious biases. The importance of diversity in a 2021 world and restorative practices. And now they charge companies to do this it looks like, is that right?

Pulliam: Companies and even worse, local school systems. This fellow, who is a local minister, at least, that’s his part-time gig, I think he might be a diversity consultant full time.

He’s the only faith leader serving. Our county has probably 200 churches. The school district picked the most left-wing clergyman to serve on this. One of the things that he posted this fellow is during last year, during the height of the George Floyd rioting, he posted something on the Genesis Diversity Consulting Facebook page that said, you shouldn’t be objecting to the rioting. You should be objecting to what it is that’s causing the rioting.

Pulliam: And it’s nihilistic that if a faith leader cannot even stand up and oppose anarchy, lawlessness, arson, and rioting, then what kind of moral compass is he guided by? This is very troubling. It’s nothing but left-wing politics dressed up in religious clothing. And it’s just one more form of indoctrination.

Pulliam: It’s outrageous. And I wonder, when are people going to wake up and look at what’s going on around them and start demanding answers? Why are we permitting this? It’d be one thing if this was happening in Portland or Austin or Minneapolis, but this is happening in the heart of the Bible Belt in one of the most conservative parts of America.

And it’s happening right in front of us. I’ve been accused by my liberal critics of fancying myself as the Paul Revere of East Tennessee. (Leahy laughs)

Leahy: Anytime you report the truth, you are going to being criticized.