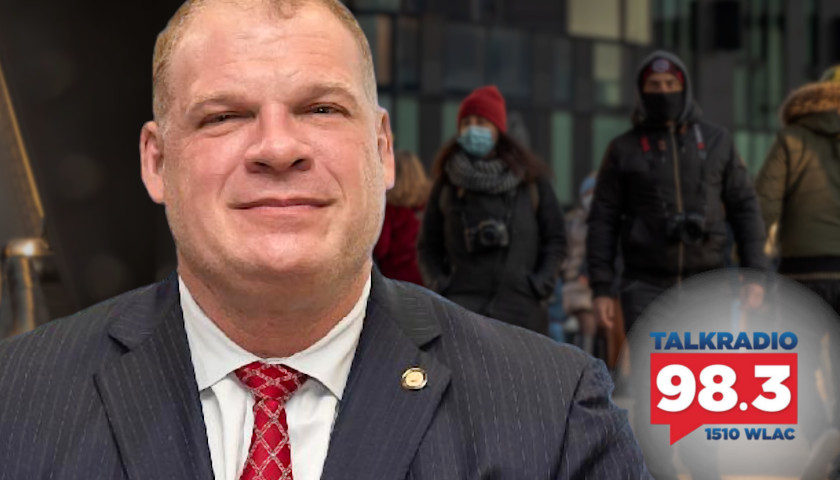 Jacobs: Good morning. How are you?

Leahy: Did you get your wake-up call with your directions from Dr. Anthony Fauci today?

Jacobs: I think a lot of us have gotten a wake-up call from Dr. Fauci recently with directions. Unfortunately, with everything going on with Rand Paul and the debates that he’s had with Dr. Fauci, the wake-up call isn’t great anymore.

Leahy: No, not at all. First, let me just ask the obvious question. Have you seen any definitive studies that show the wearing of these cloth masks have any impact on limiting the spread of COVID-19?

There are studies and they’re peer-reviewed and incredible that show that the cloth masks don’t do anything. Other people have studies showing that they do. I think when we look at the overall spread of COVID-19 and compare places with strict mask mandates, no mask mandates, those sort of things, it looks like the virus just does what it’s going to do.

Jacobs: Regardless of what interventions people do.

Leahy: Yes. That’s my take as well. I’ve seen some of these studies that don’t necessarily watch the science of transmission, but, in fact, do the broader comparison between this area had a mandate and that area didn’t. And the area that had the mandate did better. But it never seems to make sense that it’s necessarily causal to me. That’s sort of my take on it.

Jacobs: And I agree with that. I think it’s important to point out, too, that COVID-19 is real. It’s dangerous, especially for some people. But it’s also become incredibly politicized at this point.

Jacobs: And for me, you know, we’re a country that’s based on individual liberty and the freedom to make choices for ourselves. And we need to keep that. And it doesn’t matter if it’s the President of the United States or an infectious disease expert.

I don’t have a problem with masks and people doing whatever they want to protect themselves. My problem is when the government says you must, you will or else. That becomes very problematic for me.

Leahy: Let’s talk about your role as mayor of Knox County. Pretty big county. The population was 450,000 or so.

Jacobs: Yes, we are actually.

Leahy: Now in the state of Tennessee, there are 95 counties. In six of those counties the decision about handling health regulations is in the hands of county officials. And in 89, those decisions still remain in the hands of the governor. Is Knox County one of those six counties where each county can determine rules and regulations?

Jacobs: Yes, we are. We have our own health department. And there were a lot of controversies last year throughout the pandemic. But we have a board of health that was empowered to issue health orders.

The real issue is when you look at state law, we realized that this board of health’s power is literally unlimited. There were no constraints. When you look at the statute, we think, oh, they’re going to do this during the healthcare emergency or public health emergency.

And that wasn’t the case. There was no specified time limit. And there were no restrictions. All it said was they can issue orders to protect public health and safety. So when you think about things that have happened to other places, like banning sugary drinks, saying that guns are a public health crisis, gun violence, they were empowered under state law to issue regulations concerning those things, and regulations that they issued preempted anything coming out of the county commission.

They were the most powerful lawmaking body in Knox County. The commission eventually took that power away from them and made them an advisory board. But we’re still looking at state law and all this has changed.

And it’s rather confusing as to who actually has the authority to issue public health orders in Knox County. And that’s something I think the other counties are struggling with too.

Leahy: Mayor Jacobs, people would think that the mayor of the county is the chief executive officer of that body and basically sets the – administers the law as determined by the county commission and the state law. Is the county public health commission elected or appointed? How do you get on that?

Jacobs: Yes. They’re appointed. They’re recommended by their various trade associations. The Doctors Association and the pharmacists’ people. And then they go to the commission. They are confirmed by the commission.

Leahy: So the commissioner confirms them. How many members are on the county health board in Knox County?

So unless there’s something blatantly wrong or bad or questionable about a candidate, since they’re recommended by their professional association, they are probably going to be confirmed.

Leahy: Well yes. What are the dynamics been with that board of health during this period of time you are elected? When were you elected? 2018?

Leahy: So during that period of time, at the beginning of it, the board of health had these unfettered powers, and now those powers have been limited. What have been the dynamics of that board with you?

Jacobs: When they had policy-making powers, there were a lot of eight to one votes – me being the one vote against mandates – we had a mask mandate. I voted against that. Shutting down businesses, learning capacity, restaurants.

A curfew of restaurants. I voted against all those things. The only time I voted with the board of health is if they had something in place and they were replacing it with something less restrictive.

Leahy: Mayor Jacobs, could you stay through the break?

Leahy: I want to go into the dynamics of these board meetings that are eight to one with you being the one. That would be interesting.