J.C. Bowman Reflects on Signing Up for the Corps and Walking Those ‘Famous Yellow Footprints’ 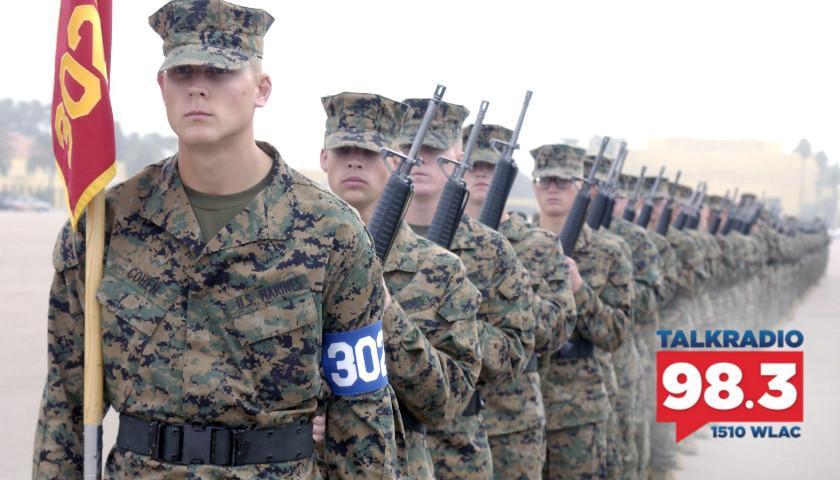 Live from Music Row Thursday morning on The Tennessee Star Report with Michael Patrick Leahy – broadcast on Nashville’s Talk Radio 98.3 and 1510 WLAC weekdays from 5:00 a.m. to 8:00 a.m. – host Leahy welcomed Marine veteran J.C. Bowman in studio to talk about what it was like signing up for America’s exclusive fighting force – the Corps.

Leahy: In the studio right now, our very good friend J.C. Bowman. He’s the founder and president of Professional Educators of Tennessee. If you are a teacher and you don’t want to be part of a left-wing union, but you want benefits, this is the place to go. Visit them on the web at proedtn.org. Good morning, J.C. Bowman.

Leahy: I’m doing great. A couple of things we want to note. You are wearing your Marine Corps shirt right now. You are a Marine Corps veteran. It’s a special day for Marines today.

Bowman: I tell you what, there is nothing like getting scared to death standing on these yellow footprints. I think everybody ought to do it once in life. You come through, and they put you on a bus.

Leahy: Let’s just put this in context. You graduate from high school.

Leahy: What happened next?

Bowman: I played around in college for a little bit, for a little semester. My dad told me I was either going to stay in college – and college just wasn’t working out for me. I was playing basketball more than I was in class.

Leahy: There’s nothing wrong with that.

Bowman: I developed a really good jump shot (Leahy chuckles), but my dad said, you’re either going to college, son, or getting a job. And I was determined to prove him wrong. My dad was in the Navy, so I went there.

Leahy: Did you go to a recruiting office? What did you do? Was it in Chattanooga?

Bowman: So I go in there and I see the Navy guy, and it’s like, it’s not for me. And I talked to the Army guy, and I see some guys I’d gone to high school with, and I’m like, eh, these guys are going to get me killed. (Laughter)

I don’t even think they graduated. Not that that’s bad. I’m just pointing it out. Nothing wrong with the Army either. And then subsequently, the Air Force, they were just full up. And the last office you look at is the Marines, and that is the coolest uniform I’ve ever seen.

Leahy: Was it the uniform that did it?

Bowman: It was. Those dress blues just pop.

Bowman: What I did was, I said what is the process? I said, what would it take to put me in that uniform? He said, your signature on a piece of paper. And I said, well, what’s the steps on it? What can I get as a Marine, you know, a job? What would I do in the military?

And I was looking at it. He said well, let’s take a test and see how you do. And they scheduled me for a test and he came back and I’d scored the highest score that they’d ever had in my hometown.

Leahy: Not to brag. But it was a fact.

Bowman: And he came back and said whatever job you want, you can have. And so there were two jobs that really interested me– 0431, which is your logistics. You load ships, and planes, and you get deployed and you work to do that.

And 0451, you load planes mainly. And what you do is you also do the parachute and you jump out. And they were showing me the video footage of them jumping into the Atlantic in January.

Leahy: And you thought this is what you wanted?

Bowman: And I thought, yeah, this is great, but I don’t like cold water. And so I said I better do the 0431. So I worked in S4 in the Marine Corps, which is logistics.

Leahy: What happens on the day that you get signed up? What do you do?

Leahy: Before that though. So you leave home. Do you get, like, on a bus? Is there a Marine Corps bus that comes by or what happens?

Bowman: They fly you to Savannah, Georgia. I get on the airplane in Chattanooga, Tennessee.

Leahy: And you fly into what?

Leahy: Okay, what happens then?

Bowman: And then they put you on a bus. You get on a special bus for the Marine Corps.

Bowman: Now you’re on the bus and you pull up and the three biggest guys I’ve ever seen in my life get on this bus and they tell you, you’ve got five seconds to get off the bus.

And four of them are already gone. And you run out there and you jump on these yellow footprints. And it scares the snot out of you.

Leahy: The yellow footprints are … ?

Bowman: The famous – there’s yellow footprints that line up in front of Paris Island, South Carolina. And when you step on those and then you walk through a thing that says through these halls walk the greatest military force in the world. And in there you see all these pictures of famous Marines.

Bowman: It is. And you know you’re in the footsteps of some great people.