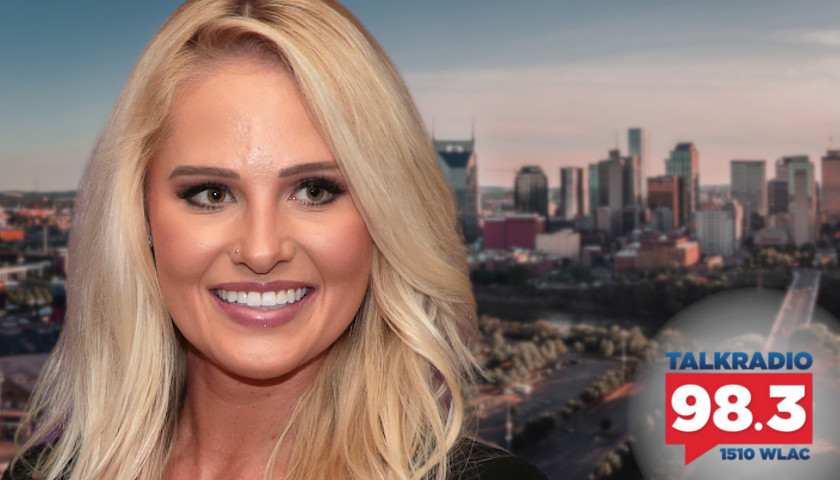 Live from Music Row Thursday morning on The Tennessee Star Report with Michael Patrick Leahy – broadcast on Nashville’s Talk Radio 98.3 and 1510 WLAC weekdays from 5:00 a.m. to 8:00 a.m. –  host Leahy welcomed Fox Nation contributor and host of No Interruption, Tomi Lahren to the newsmakers line to discuss her move to Nashville and how the migration of liberals from failed left-wing cities could compromise it.

Leahy: We are joined our newsmaker line now by one of the newest Nashvillians. But one that we are very pleased to welcome to Nashville, Tomi Lahren, Fox Nation contributor. Thanks for joining us.

Lahren: It’s great to be here! And I got to tell you, I’m almost at my one-year anniversary of leaving California for Nashville. So I got to say, this has been a long time coming. And I’m so happy to be in Nashville and happy to be on with you.

Leahy: You moved here in April. A very smart move. We’re delighted to have you here. We’ll talk about that move in a minute. You burst onto the conservative media scene like a supernova. I mean, just terrific commentary out there. You started with One American News Network. I didn’t know this. You’re from Rapid City, South Dakota. And you were an intern, for now, Governor Kristi Noem at one time. Isn’t that right?

Lahren: Yes. And you know, our governor is finally getting the recognition she deserves. And it’s all because she decided to keep our great state of South Dakota open. They give a lot of credit to Texas and Mississippi for lifting their mask mandates and for having full capacity. But never forget South Dakota. We never played that game. I hope we can say the same in Tennessee coming up pretty soon.

Leahy: I’m with you on that one, Tomi. So tell us a little bit about why you decided early last year to move from Los Angeles to Nashville.

Lahren: You know, the writing was on the wall. California was not the place to be. And I knew that moving there. I moved from Texas to LA, and I thought, I just want to be in the middle of where all this pop culture and all this liberalism is based and centered in that of the course in Los Angeles. But after a while, hemorrhaging my hard-earned tax dollars to that state, which is clearly a failed state, and a failure all together with a horrible governor that I’m very delighted to see they’re likely going to recall, I decided you know what?

It’s time to pick up and go to the South. And I looked at Nashville and I said, Nashville is a great city. But you know what? Liberalism. It’s affecting Nashville, too. So maybe this is a place that I can come and sound the alarm. A warning, if you will about what happens when you start implementing liberal policies. It’s not too long before you California your Tennessee.

Leahy: That’s a very good point. Craig Huey, who also is a refugee from California and a direct marketing expert, has come in and talked to us about that as well. So you do live in the city of Nashville now, what is your experience been with Tennesseeans?

Lahren: Well, Tennesseeans are great. I don’t have a lot of love for this mayor. And I’ve been pretty vocal about that, especially moving from California. Like I said, the writings on the wall of what’s going to happen to Nashville if we keep electing people like Mayor John Chicken Cooper, as I so affectionately have titled him. (Leahy chuckles)

Leahy: You call him John Chicken Cooper. I love that name. I call him a tin pot dictator. I think your name is a little bit better.

Lahren: (Chuckles) You know, I think whatever fits. I think there are so many names that can fit this mayor and what he’s done to the city over the last year. And it doesn’t really look like there’s going to be an end in sight. We’re still keeping up with some of these restrictions and mandates that are crushing our bars, crushing our economy.

You know, no bail out for that. We got to reopen. We open fully. And I hope Mayor John Chicken Cooper (Leahy chuckles) is listening because I know that he does take a look at my Instagram stories and my tweets from time to time. So Chicken Cooper, if you’re listening in, it’s time to reopen Nashville.

Leahy: By the way, did you see our story at The Tennessee Star that the community oversight board they named a member to the community oversight board, who was a convicted felon and not a registered voter. Ovid Timothy Hughes. He resigned suddenly, a couple of weeks ago. Nobody knew why. Our reporter Corrine Murdock looked into it. He was convicted of a felony back in 2008 and he’s not a registered voter which is required by law. How about that?

Lahren: (Chuckles)  I wish I could say I was shocked and surprised, but I’m really not. Watching this mayor and much of the city council placate too BLM and other extreme leftist movements. None of that really shocks and surprises me. Like I said, the California virus is moving in faster, far faster than coronavirus. And if people don’t wake up, it’s only a matter of time before Los Angeles comes to Nashville, Tennessee. And there’s no going back once that happens. Nothing surprises me anymore.

Leahy: Tomi, we’re going to have a big party, probably next month or the month after to welcome all of the new conservatives who’ve come to Nashville. Including the Daily Wire folks and Candace Owens. You’re more than welcome to come to that party. We’re probably going to have to host it a little bit outside of Nashville, Davidson County because of restrictions. But we’ll let you know. And we’d be delighted to have you come to that party.

Leahy: Tell us about your talk show on Fox Nation, No interruption.

Lahren: So no interruption is my long-form show on Fox Nation, which is our digital streaming platform. And I actually just returned this weekend from my home state of South Dakota doing a story on the pipeline and all of the people that have been affected by the Biden administration’s executive order on that.

So what I really do on that show is I take a deeper dive into the issues facing our country. Whether it be the border or the pipeline or the mental health issues that we’re facing because of via Democrats, infringements, and mandates that came along with coronavirus. That’s what I explore in-depth on No Interruption. And then of course, I have my Daily Final Thoughts which is what people are used to hearing from me. Not a controversial segment at all.

Leahy: Not controversial at all. Tomi, I love watching that, by the way. I mean, you pull no punches. You just smack them right in the face. It’s fantastic.

Lahren: Well, thank you. It’s about time conservative start doing that. I talk a lot about cancel culture, too. And the reason that we’re in the midst of cancel culture is partly our own fault because for too long, conservatives have caved. We’ve bowed, we’ve deal to the mob, and I think we’re realizing the impact and effects of that.

So we only have ourselves to blame. It’s time to stop being the silent majority and to start being the louder majority and taking the country back because that’s the only way we’re going to save it. Sleepy Joe, 50 days and we haven’t heard from him, but he’s sure done a lot to hurt our country. And so we’ve got to be a little louder and more vocal about it.

Leahy: Now your program. You’re with Fox Nation. Do you record it here in Nashville? Do you go up to New York? How does the logistics work of that?

Lahren: I have a studio based right here in Nashville, Tennessee. In fact, I just got off of Fox and Friends. It’s nice because I don’t always have to put on pants to do TV, so it works out. But yes, I am here in Nashville. Thank goodness, because New York sounds absolutely horrible right now.

Leahy: It is absolutely horrible. All of the people that we know in New York City are trying to move and they’re all looking to move to Nashville. Likewise, in California. If you are a realtor in Middle Tennessee, the best place to market is California, Illinois, and New York.

Lahren: Oh, absolutely. But you know, I do have a fear with that because with the Californians coming in, we know that they’re not all great conservatives. We know that a lot of them are liberals fleeing a liberal failed state and bringing their policies with them. But not only are they bringing their policies with them, but they’re also bringing a whole lot of money in their pockets from selling their real estate in California.

But they’re coming here. They’re buying up the houses site unseen. They’re pricing out the locals and then they’re voting in horrible policies and horrible people. I mean, we can’t sustain another 34 percent property tax increase. So hey, Californians, you’re welcome. But leave your politics at the door, please.

Leahy: That’s a good idea. By the way, Glenn Reynolds, who is Instapundit at instapundit.com is a professor of constitutional law at the University of Tennessee, has a great idea. And maybe we ought to do something with this. We ought to have a welcome wagon for people that come in from California and just say as they cross the border say, welcome. We are a no-income-tax state. We are going to keep it that way because it’s in our constitution. Take your liberal ideas and leave them in California. You think that would be a good idea, Tomi?

Lahren: I think we should definitely be putting up signs, billboards, Instagram, and whatever we can do. And I would also recommend that we screen some of the scenes from downtown Los Angeles and what they left and what they fled from and all the liberal policies that have destroyed their home city and state. And just let that be a little friendly reminder of what happens when you vote in liberals. Because, as I always say, liberalism is a mental disorder. Get well soon.

Leahy: (Chuckles) Yeah, that is funny. Hey, what has been the biggest thing that surprised you about Tennessee and Nashville since you moved here in April?

I have had things thrown at me. I have been heckled. But even the liberals here, are far more respectful in the South. So I got to give them that. And I got to give them some credit. I think that they know that there are a lot of conservatives here, so they’re not going to pull that crap. I got to say, people here are just in general nicer than a lot of places.

Leahy: I will confirm that. I moved here back in 1991 and I lived in California. I went to business school out there. But we moved here in 1991. I’m delighted that I made the move. And we are equally delighted Tomi Lahren that you’ve made the move here. Thank you so much for joining us today. Will you come to the studio sometime?

Lahren: Let’s do it. I’m just down the road, so. We’ll have a lot of fun and really bring the punches to the mayor.