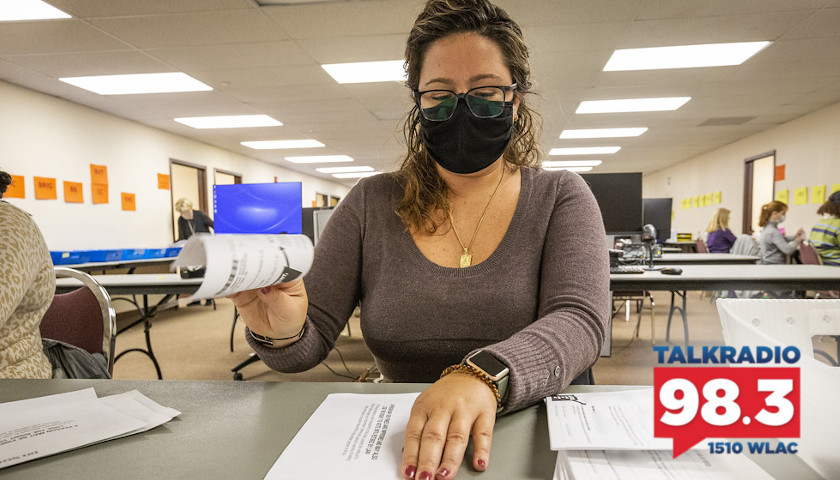 Live from Music Row Wednesday morning on The Tennessee Star Report with Michael Patrick Leahy – broadcast on Nashville’s Talk Radio 98.3 and 1510 WLAC weekdays from 5:00 a.m. to 8:00 a.m. –  host Leahy welcomed all-star panelist Crom Carmichael to the studio and took calls from listeners expressing their concerns with the alleged voter fraud in the recent elections.

Leahy: Welcome back to the Tennessee Star Report Michael Patrick Leahy with Crom Carmichael. A spirited discussion today. How do we move forward? People have been calling in. If you want to weigh in (Call number). Quinn in White House wants to weigh in. Good morning Quinn. You’re on The Tennessee Star Report with Michael Patrick Leahy and Crom Carmichael.

Caller Quinn: Good morning gentlemen. My position is that Congress will grant a 10-day extension to examine the voting results because they’re going to be presented with evidence this morning that the Obama administration paid $400 million to an Italian defense contractor to use a military satellite to load the software that rigged the election.

Leahy: So hold on just a second here. So, Quinn, this is you know, I’ve heard this particular allegation out there. But not presented in any form beyond social media.

Quinn: It’s only in Italian news right now. If you go over to the Italian newspapers, they’ve been talking about it since the first of the year. And the CIA is involved in this as well. And they actually have pictures in the Italian newspapers. Italian intelligence services retracted two guys who came into Italy to do this operation who were based out of Rome. And what they were doing is they were tracking the election results from Frankfurt, Germany and (Inaudible talk).

Leahy: Let me just interrupt here and get Crom in. Call me skeptical on this.

Carmichael: Let me say this. Quinn what you are saying could very well be accurate. And I’m even going to go so far as to say that it is presented to Congress as an allegation. It’ll be presented at and it’ll be presented with evidence to support the allegation. Tell me why the Democrat House should vote to let that be investigated.

Leahy: We’ve got other callers so please try to wrap it up in 30 seconds.

Quinn: If they don’t, they are going to certify a fraudulent election.

Carmichael: And they don’t care.

Quinn: Here’s the thing though. Here’s the thing. Because of the executive order signed by Trump in 2018 anybody who goes along with the fraudulent election will be not only criminally tried but they will have everything they’ve owned…

Carmichael: But let me just say that Quinn’s point and of all the points that have been made about it, that’s the strongest point. Now, I still don’t think that the Democrats in the House don’t care about that.

Caller Dave: My question is we fight fire with fire. We’re up against the Democrats and mainly Pelosi. I would just say, what would Nancy do? And do what she would do to get the result that she wants and get the result we want.

Carmichael: Well we don’t have the power.

Leahy: She’s got the votes.

Leahy: We have one last caller. Pam is from Georgia traveling through Nashville and wants to share some information about the election in Georgia. Pam, you are on The Tennessee Star Report with Michael Patrick Leahy and Crom Carmichael.

Caller Pam: Thank you. And thank you for letting me share what’s going on in Georgia. I received two ballots that I did not request. I just want to say that what’s happening in Georgia is that Stacey Abrams who did not win the governor election which was won with Governor Kemp is a force to be reckoned with. And she has coordinated an event in Georgia where she’s included the Atlanta Hawks and the Atlanta Falcons.

She uses the center of the Hawks where they play ball. She has been able to get grants for mobile voting centers that are on buses. And I don’t know how much of this has been made public on mainstream media, but there is little research that will show these mobile voting buses that she’s been able to secure grants with the ability to go out and have unexcused abilities to vote and to go into these neighborhoods in Fulton County.

Leahy: We’ve got 30 seconds Pam. If you could wrap it up.

Pam: Here in Fulton County there are 38 mobile voting stations where you can go in and drop your ballots.

Leahy: So Stacey Abrams has basically co-opted the system there and made it easier for Democrats to vote in ways that are prone to fraud. Pam, thanks for your call. I appreciate it.