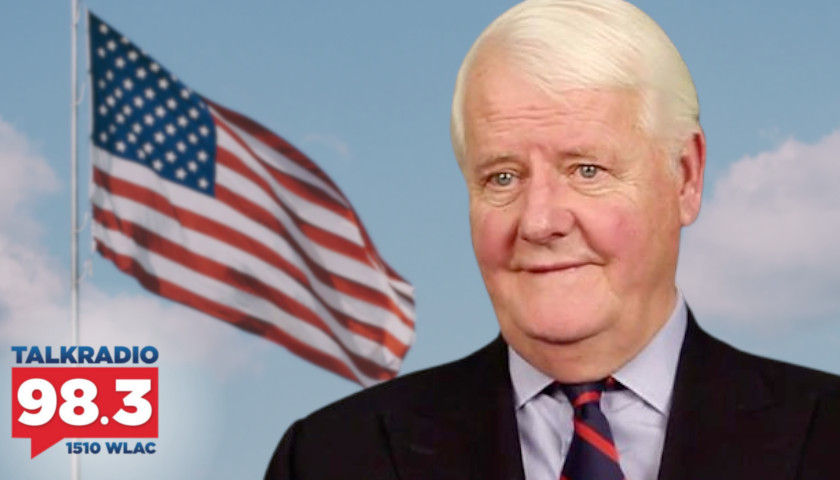 Live from Music Row Wednesday morning on The Tennessee Star Report with Michael Patrick Leahy – broadcast on Nashville’s Talk Radio 98.3 and 1510 WLAC weekdays from 5:00 a.m. to 8:00 a.m. – host Leahy welcomed author and thinker Os Guinness to the newsmaker line to talk about what shaped his world view, being part of the L’Abri Community in the 60s, and his admiration for America.

Author of The Concept of the Golden Triangle of Freedom and many books. Welcome to the newsmaker line, Os.

Guinness: Well, thanks for having me. It’s a great privilege.

Leahy: I have followed your work, and I have to say you’re one of the greatest thinkers on the American scene today. Reminiscent in my view of the great Alexis de Tocqueville. So my hats off to you for a lifetime of great work.

Guinness: Thank you. That’s a great compliment. I’m unworthy of that one. But a pleasure to be with you.

Leahy: I wrote a book guide to the Constitution and Bill of Rights for Secondary School Students, which we use for our annual National Constitution Bee kind of a Spelling Bee where we give educational scholarships to the winners of secondary school students.

I just want to read from this part of our book:

As Ronald Reagan famously said, freedom is never more than one generation away from extinction. The founders knew this. And recently, a Chinese-born English scholar who resides in America expressed in very simple terms how freedom is gained.

Why it relies on the virtue of the population and how that virtue is a natural extension of faith.

Faith requires freedom or constitutional liberty to thrive and prosper. How did you come up with the concept of the Golden Triangle of freedom, Os?

Guinness: Well, let me go back a bit. The American experiment is unique in history as free-ordered freedom. And growing up in a Communist country and seeing what the Soviet regimes did in Eastern Europe, I’ve always had an incredible appreciation of the uniqueness of the American experiment.

And yet today many Americans are ignorant of it. So the Golden Triangle came out of talks in Washington. I was trying to show how the challenge not just winning freedom, the revolution or ordering freedom, the Constitution, that’s done.

The challenge today is sustaining freedom. And as you look at the framers’ understanding of that, the Golden Triangle was their answer.

That was the only way you could sustain freedom. Now, my current book actually looks much deeper than that, because you can see the deep divisions in this country now.

And I would argue many people don’t see the depth of them. There is really a difference in those who understand America and freedom from the perspective of the American Revolution, which was rooted through the Reformation in the Old Testament, the Hebrew Scriptures.

They have never worked. And yet you can see the inroads in this country. So we are at an extraordinary civilization national moment in America.

Leahy: Are you optimistic, or are you pessimistic about our future, Os?

Guinness: I would say that I’m hopeful but realistic. Optimism is often circumstantial. Are you bullish or bearish. It’s a glass half full or half empty.

And I don’t think that’s the point. We got to look at the facts in the white of the eye, and they are sobering today. And yet always with hope. And one of the things we need is leadership.

I don’t just mean at the very top level, but certainly at that level, people with vision and enterprise and initiative who can address the big issues in call America back to its best. So I’m hopeful.

Leahy: What would be an example of somebody out there using the kind of leadership that you see we need? Perhaps reminiscent of the leadership of the Founding Fathers.

Is there anybody out there at a local or national or even state level that you can think of who is a good example of leadership?

Guinness: Well, all too few are at the very highest level. You take the former president who talked about Make America Great Again, or the current president talks to restore the soul of America.

Neither of them says what made America great in the first place. In other words, we need leaders on the order of Madison and Hamilton and so on.

You think of the Federalist Papers, that incredible understanding of the system they were devising. And if people want to return, we can’t just ad hoc and politicize everything in today’s issues.

We’ve got to have people who think deeply and widely and richly. And the book ends of history. If you look over, all of history is anarchy on one extreme.

All freedom, no order. And authoritarianism of the other extreme, all order, no freedom. And the American experiment was once magnificent:

Ordered freedom in the middle. That’s what’s being lost. So we got to see what’s last and how to repair it. You can go into specifics.

Leahy: Let me ask you this Os, how significant has your Christian faith been in the development of your political philosophy? And in particular, I want to talk about your experience with Francis Schaeffer and the L’Abri Community.

Many of our listeners have never heard of the L’Abri Community. I’ve been fascinated by it. Tell us about your experience with Francis Schaeffer, I guess, back in the 70s?

Guinness: It was the 60s for me. It was a small community study center. But their purpose was to always give honest answers to honest questions.

So while there was a Christian community, there was always 40 to 50 percent of people who seekers on the road to the East or radicals protesting Vietnam or acid heads or whatever.

We had Timothy Leary come there, gang members, and so on. It was a fascinating place.

Leahy: Where exactly was it now, Os?

Guinness: A little village in Switzerland, in Huémoz just below the ski resort of Vrindaban. So that was what gave me my sense:

You can think about anything and everything as a Christian and think it through Christianity. And, of course, that is what’s behind coming over. I’m not American. I’m a great admirer of this country.

Deeply challenged and sometimes angry. Sometimes sorrowful of the way Americans are suppressing and squandering this great heritage of ordered freedom.

Leahy: What kind of guy was Francis Schaeffer – because he was the leader of this L’Abri Community. And I guess, how did you come to participate in it?

Guinness: Well, I was a student at London then. I was at Oxford later. And we had tremendous teaching. But even a Christian teaching – rich, deep blocks of theology – but no understanding of the culture.

And when I met Francis Schaeffer, here was this unusual little man with a goatee and Swiss knickerbockers and so on. But he connected all the dots and showed how the films and the novels and the philosophy and all of it fit together.

And so he was the one who taught me to think freely about everything as a Christian. Thinking Christianity.

Leahy: Here’s something about your personal story that’s quite fascinating to me. So you are here. You’re an academic. And at this L’Abri Community in Switzerland, you meet a person who would not necessarily be somebody connected to an academic who was born in China and the son of Christian missionaries. You meet a beautiful international model. Tell us about that story. It’s a fabulous love story.

Guinness: Well, I was very privileged. Jenny had been a fashion model in New York on the front cover of Vogue and Ladies Home Journal and many, many magazines.

And through the emptiness and hollowness, she was engaged to a French Baron. Her own age. 21. Very wealthy and handsome. And they were friends with the Duke and Duchess of Windsor.

And people like Pablo Picasso and Salvador Dali. And one night, they were at an extraordinary fancy dress party in Paris – Salvador Dali had his pet Cheetah.

And it had a gold color and so on. It had been declawed, defanged, and everything, she said. And as she was looking at this, suddenly it seemed a caricature of everything it was created to be.

And then she said, my goodness. So are we. It was as if the floor opened up, and she was looking into an abyss. And she said to her fiance, I’ve got to search for the meaning of life.

She had grown up in an atheist family. And after a year or so of searching, she came to faith. Fortunately for me, she broke her engagement.

And we met later when she came to study at the L’Abri Community in Switzerland. So, enormous privilege. And she’s actually writing a story now.

Leahy: When we come back, we’ll have more with the great Os Guinness.