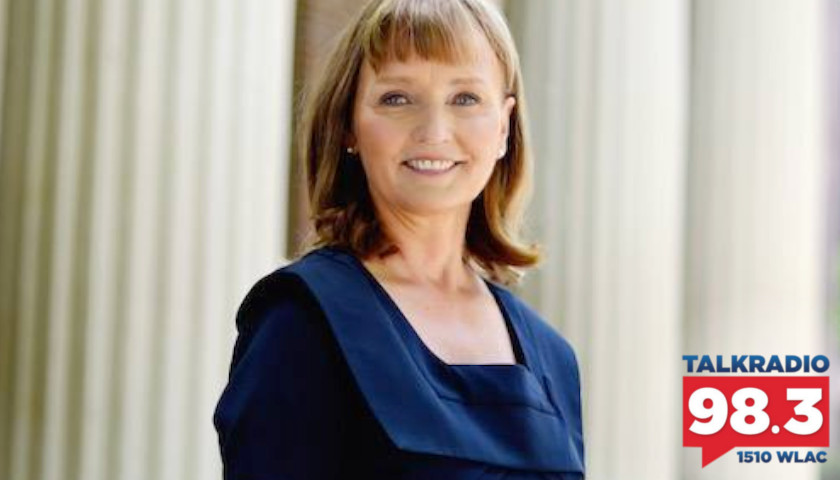 Live from Music Row Thursday morning on The Tennessee Star Report with Michael Patrick Leahy – broadcast on Nashville’s Talk Radio 98.3 and 1510 WLAC weekdays from 5:00 a.m. to 8:00 a.m. – host Leahy welcomed former Speaker of the Tennessee House Beth Harwell to the studio to discuss her future and the future of America.

Leahy: In studio with us, our friend, former Tennessee Speaker of the House, Beth Harwell. Beth, so you’ve had quite a career after eight years of speaker.

You ran for governor, didn’t win the primary. You haven’t been goofing off ever since. (Harwell chuckles) What have you been doing?

Harwell: Well, I’ve been doing a few things. I do a little bit of teaching at Middle Tennessee State University. It’s very important to me that the next generation learn about the government and its history and are proud of it.

Leahy: So I didn’t know you were teaching at MTSU.

Harwell: Well, I don’t teach full time. I just go on and do lectures and about – just a visiting professor.

Harwell: It’s usually in the honors program in the political science department.

Leahy: And so are these, like, small classes, big classes?

Harwell: We did a democracy project that I participated in. They’re trying as a school to engage young people. And we desperately need young people to be engaged.

But we need to have them, well-informed young people, before they engage. That’s the key there.

Harwell: Exactly right. And then I also serve in the Tennessee Valley Authority Board, a number of other boards here in Nashville – Montgomery Bell Academy and KIPP Academy.

Harwell: Well, they’re doing an excellent job. I know they helped a lot of kids through the pandemic. They’ve been involved in these young people’s life. And that’s just been a sharp contrast in which I’m very proud of them for what they’re doing.

Leahy: Do you like serving on the Tennessee Valley Authority Board?

Harwell: You know, it’s a challenge because it’s outside of my true area of expertise.

Leahy: You’re not an expert necessarily on energy.

Harwell: I’m not a physicist or specialist but I’m learning a lot. And I tell you, Tennessee Valley Authority does a lot of great things for the Appalachian area.

I’m learning more about them every day. But the one thing I appreciate is they do keep our rates relatively low. We can always be lower.

But they are low compared to other places. But more importantly, you saw what happened in Texas. TVA has a diversified portfolio that I really think serves the public well.

Leahy: Well, it’s interesting because we had on this program yesterday, State Representative Chris Todd. You probably know Chris from Jackson. Great guy.

Chris told us that here the group of 15 states from the South, their state legislatures convened. He was part of that group.

And he said they got a presentation from TVA and told them how they had set up redundancy and resilience so they didn’t have the kind of problem Texas did.

Harwell: Right. And that’s good management. We can be very proud of that.

Leahy: Well, that’s good. That’s good. So is it more relaxing not to be the speaker of the House? Are you goofing off more? Are you going out to dinner more?

Harwell: Of course I’m definitely doing my walking and doing a little more reading other than political things.

Leahy: What are you reading?

Harwell: You know what? I have a whole spectrum of books I read. I’m reading right now a book called Someone’s Daughter that someone let me borrow. And it’s actually good. So I like a diversity of books.

Leahy: I recommend a book for you. I just discovered this writer, Conrad Richter. R-I-C-H-T-E-R. He won the Pulitzer Prize in 1950 for the third part of a trilogy.

And the third part of the trilogy was called – a book called – The Town. The first part was The Trees. The second part was The Fields.

Leahy: It’s really great. And it’s part of a trilogy called The Awakening Land. I just discovered this. It’s a great book, and I really enjoyed it. Beth, for the big question. The big question. What’s in your future?

Harwell: Well, Michael Patrick, first, I want to thank you for letting me be on here. It was nice and reminisce with you a little bit. (Leahy laughs) We go way back.

Leahy: We do go way back. And it’s interesting because we didn’t always see eye-to-eye, but we are always were friendly.

Leahy: This is the way to do it.

Harwell: It is the way to do it. I think it’s critical as we go forward that we can discuss issues that have been important. As far as my future, I’ve had a wonderful opportunity to serve the public and hope that I’ve done that well, and I don’t know what the future holds.

I don’t think anyone does. We’re gonna have to wait and see what happens. But I’ll certainly let you be one of the first to know.

Harwell: If that would please you. (Chuckles)

Leahy: It would! If you want to do something, that would be very interesting. Overall, Beth, on a scale of one to 10, one being not worried at all and 10 being extremely, existentially worried, how worried are you about the future of our country?

Harwell: I’m probably at an eight or nine. And I’ll tell you why that I’m not the full 10. I believe in America. And I think our elected officials have left us.

American people are as good and have as strong of values and beliefs that they’ve ever had. It’s that we’ve allowed our elected officials to leave us and we need to hold them accountable. I’m amazed at the people that will say to an elected official, oh I’d love to have my picture taken with you.

You know what? That elected official ought to be saying that to the citizen. I’d love to have my picture taken with you, because we’ve allowed them to forget that they’re our servants.

In Washington, D.C., they’re just up there not even obeying our Constitution. And we’re letting them get away with it. And it makes my heart bleed. It really does. This is a great nation. If we let it go, there’s no other place in the world we can go. This is it.

Leahy: So eight or nine. I have to kind of agree with you in terms of where we are as a nation right now. Do you think we can make it as a country with the current occupant of 1600 Pennsylvania Avenue, who appears to be engaged in illegal – and this is my word, not yours – illegal actions by not enforcing our immigration and weak on foreign policy?

Freedom is now something that the people of Cuba want.

And the current occupant of 1600 Pennsylvania Avenue appears to be doing very little to support those efforts. He’s letting China dominate the South China Sea.

He’s not building up the Navy. You look around and you say this guy is intending to destroy our Constitutional Republic.

Harwell: It makes you think he doesn’t love our country because he’s deliberately taking us down a path that I don’t know that we can turn around and get back off of unless we change things and change things quickly.

Leahy: Yeah, it does seem to be deliberate, doesn’t it?

Leahy: That is very troublesome. Beth Harwell, former speaker, Tennessee House of Representatives, thanks so much for joining.

Harwell: Thank you. My pleasure.

Leahy: It’s been great to have you in here and come back again if you would please.

Harwell: I’d love to. Thank you so much.