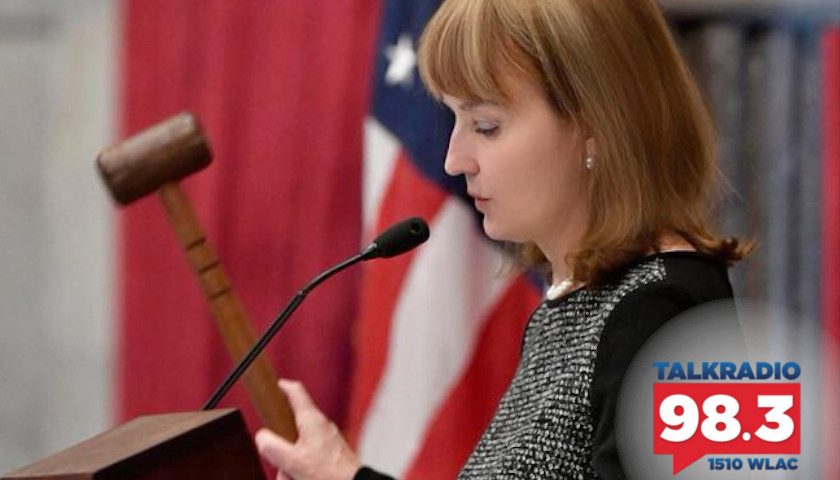 Leahy: We are joined in studio by our good friend, former Speaker of the Tennessee House of Representatives Beth Harwell.

You know, Beth, as I look at the country today and I look at the problems we have, I’m a big believer in the concept of federalism and state sovereignty, as you are.

Leahy: Now I look at this and I say, you know what? I think the most important job in America today is to be the speaker of the House of Representatives in a red state legislature. That’s how I see it.

Harwell: It’s a great job. It really is. And I thoroughly enjoyed being speaker. And you’re right. Federalism is so key. And I think we’ve seen this in the COVID thing because certain states have handled the crisis differently than other states.

Certain cities have been doing things differently. And you’ve seen a sharp contrast. But states are the laboratory for change.

And that gave us an opportunity to see what works and what doesn’t work rather than a national mandate.

Leahy: Is it Justice Brandeis who said that back in 1910?

Harwell: Absolutely. Yes, he did.

Leahy: States being the laboratories of change. Each state gets to do what they want. And if it works, maybe other states will copy it.

Leahy: 30 years in the Tennessee General Assembly. Is that an exhausting job to have as a state representative?

Harwell: Again, as we’ve mentioned, one of the things I liked about it is that I had children at the time that were smaller. I could come home every night.

It’s a part-time job, so they’re only in session January through May or June. The work is intense when we’re there. But we are also in our communities working there as well.

So I think that gives us a great balance. Of course, being speaker is a little bit more of a full-time job because you serve on state boards on a number of different things.

And being speaker is something I thoroughly enjoyed doing. I used to use this as an illustration because people ask me, what does a speaker do?

It just has to happen. So you follow that. And then secondly, I always used to use it as an illustration because a lot of times when I would speak to groups –  they’d be little third-graders because that’s when they come and visit the state capitol – and would tell them that being speaker of the state House is a lot like being the teacher in front of a classroom.

Can you talk anytime you want to? No, you have to raise your hand and the teacher calls on you. The same is true in the state House. No one can speak unless the speaker acknowledges them and calls on them.

Unbeknownst to a lot of the public is I have a little button right there on my platform so I can turn people’s microphones off and on at their desks. (Laughter)

Leahy: I think you may have used that once or twice.

Harwell: I did use it once or twice.

Leahy: I do recall that. I do recall. Before we get into this, you have witnessed history. You’ve witnessed the huge transformation in the Tennessee General Assembly from when you first went in 1990 and Republicans were a super minority.

Then 2009, 2010, became the majority, and now are in both houses a supermajority. That must have been exciting, thrilling, and exhausting all at the same time.

Harwell: It really was. And, you know, as I said, it’s a transition to moving from a minority party to the governing party.

I think we’ve made that transition well. But who we have to thank are the people. I mean, in this great land, the highest office anyone can hold is that of a citizen.

And our citizens spoke and they’ve given us that supermajority. And I think during the time I was there, we served the public well and I think they currently are as well.

Leahy: Technically 2019, but the session was over in May of 2018. Eight years as speaker. Has any speaker, other than Jimmy Naifeh, there has been any speaker who served longer?

Leahy: Oh, how could I forget that!

Leahy: How could I forget Ned McWherter?

Harwell: He was speaker for a long time. Almost 29 years.

Leahy: Before he became governor. Now there’s a guy who knew how to use power.

Leahy: Wow. He was an effective leader.

Harwell: He was very effective. Not that we didn’t always agree with that, but he was an effective leader.

Leahy: I look at the House of Representatives now, and it’s 99 members and 72 of which are Republican. 27 are Democrats. Of those 27 – this is my words, not yours – I think 26 of them are pretty close to outright left-wing lunatics.

This is my view, right? Just socialists. I don’t see any opportunity for conversation. They used to be like the one sort of centrist there now. You know who I’m going to talk about?

Leahy: There’s one guy. One guy in the Democratic Party in the Tennessee House of Representatives today who was like the Democrats were when you first started – like most of them were and that’s John Mark Windell.

Now, John is a very nice guy, a very smart guy. He votes his conscience. Is he always going to be a Democrat? (Harwell laughs) I think he is.

Harwell: Well, I made my plead to him, and he’s going to stay a Democrat, I think. On the other hand, it’s nice to have someone like him that can be reasonable and work things out and offer something for everyone.

But you’re right. The rural Democrat Party has left Tennessee and doesn’t exist anymore. And so all you have are Democrats who have a very liberal persuasion. And it’s a shame because that makes them in a state like Tennessee rather ineffective.

Leahy: Totally ineffective because, you know, the thing I mean, the things that I’ve seen them introduce, they’re crazy. (Laughter)

They’re just crazy. Fortunately, here they are not in power. And it doesn’t look like there’s a prospect for change in the immediate future.

Harwell: Right. In the immediate future. But you always have to be cautious as your cities grow, which is happening and people come in from other places, which we welcome them.

Harwell: It makes it difficult. I mean, you can see what has happened in other big cities and only don’t want that for our major cities.

Leahy: Eight years as speaker. How hard was the job? What was the best thing about the job as speaker?

Harwell: The job was one I thoroughly enjoy because I enjoy public policy and I enjoy working with other people. And I used to tell my members again that the best criteria for being a good legislator are back in kindergarten when you got your first report card.

And there was a little thing that said, plays well with others. (Leahy laughs) To work on the legislative body you’ve got to get along with others.

I thoroughly enjoyed getting to know my colleagues. But managing personnel is one of the hardest things. You are in business.

You know that’s one of the hardest things you can do is manage a group of people. And you compound, and compound that with the fact that I don’t hire them and I don’t fire them. The public does. I just have to manage.

Leahy: But you do have authority in terms of: you get to pick the committee chairman.

Harwell: The committee chairman and all the staff. There’s about 160 staff that work for them.

Leahy: So there’s power there and the ability to control things. So what’s interesting to me is now you’ve got a Ph.D. in politics. You love this stuff. You enjoyed the job. You did it for eight years. Do you miss being speaker?

Harwell: There are certain aspects of it I certainly miss. And then there are times when they are talking about a troublesome issue down there and I thought, well, maybe it’s better not to be herding the cats right now.

I’ve enjoyed both worlds. To do it for eight years I think it was a true blessing. And I do believe it was time for me to move on.

Leahy: So you think it was time to move on?

Leahy: Had you stayed, you could still be speaker, right?

Harwell: If my colleagues allowed me to.

Leahy: They would. But you chose and said to run for governor, right. And you didn’t win the primary.

Leahy: Was that a tough loss for you?

And I wish Governor Lee well. I thought that I brought to the table the experience in state government. I had balanced eight budgets. I knew the State Department.

I knew what the National Guard was and how to use it. And I just thought I brought something to the table. But the public had other ideas in mind, and I certainly accept their will.

Leahy: What was it like being in that primary when you had 20 plus million from Randy Boyd criticizing Diane Black who you served in the House of Representatives with?

Harwell: It was a perfect storm, wasn’t it?

Harwell: No, I didn’t. We raised a significant amount of money. I fought for a primary. It’s hard when you’re in a Republican primary because money freezes.

People say I’ll contribute to you when the primary is over kind of thing.

Harwell: But I think that they had some wealthy people that ran in that race. This is America. You can do what you want with your money.

Leahy: You can spend your money how you want, right? I’m in favor of that.

Harwell: But I think we had some good discussions.

Lee: The Tennessee Star liked it. I think every major candidate advertised with us. We love those kinds of races. (Laughter)