Crom Carmichael: ‘The Biden Agenda Is Being Carried Out in the Administrative State’ 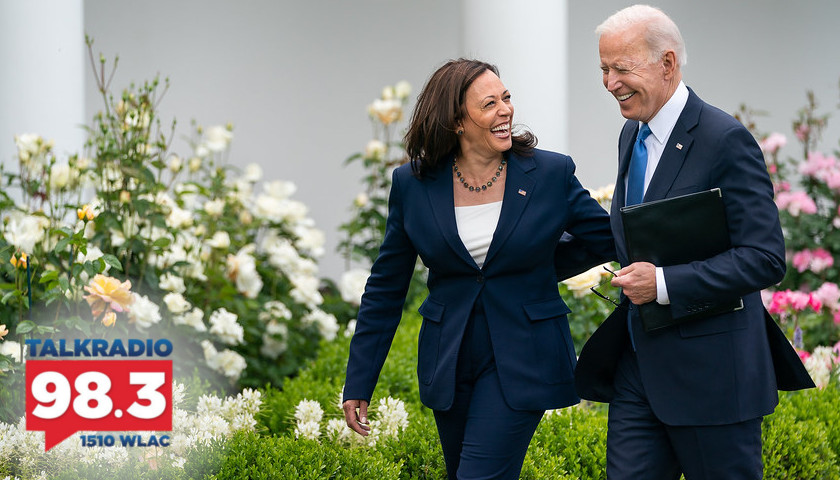 Live from Music Row Wednesday morning on The Tennessee Star Report with Michael Patrick Leahy – broadcast on Nashville’s Talk Radio 98.3 and 1510 WLAC weekdays from 5:00 a.m. to 8:00 a.m. –  host Leahy welcomed the original all-star panelist Crom Carmichael to the studio to discuss how the Biden agenda is not dead as it continues to push forward through the administrative state conveniently allowing the mainstream media to blame Republicans.

Leahy: Lots of things happening yesterday in Washington. In fact, we’re going to have today a couple of reports from Washington. Neil McCabe joins us at 7:15. The best Washington correspondent in the country. He works for The Tennessee Star and Star News Network. Senator Bill Hagerty will be here with us at 7:30.

Leahy: So I’m going to ask him a tough question to begin with. And then we’ll go on to talk about the border. And S1. S1, you want to talk about that. S1 is the bill last night, that the Democrats call For the People Act. Republicans call it the Corrupt Politician Act.

Carmichael: I want to put a couple of things into context. First of all, S1, all 50 Democrats voted for it.

Carmichael: The Biden agenda is being done through the administration. I was with a fellow yesterday, and he was telling me that in his large company that every month between four and 500 people are required to be on a two hour Zoom call for a two-hour call. And Black employees are allowed and encouraged to rail against white employees. And the white employees are required to be on the call.

Leahy: This is all part of the diversity, equity, and inclusion efforts.

Leahy: Environmental social governance. That’s the standard. We were talking yesterday here with Dan Grant of 2nd Vote Advisers. It’s basically a money market fund and exchange traded funds that are pushing against that.

ESG is the product of the big money manager BlackRock headed up by a very bad guy by the name of Larry Fink. He goes around to all these publicly traded companies and says, here are the ESG standards you must follow. And they include doing those kinds of trainings.

Carmichael: But the ESG standards are being promulgated by the federal government. He’s just the messenger.

Leahy: He may be the cause of those regulations.

Carmichael: No, he’s not Michael. He’s not. And I’m not trying to defend the guy.

Leahy: Let’s talk about those regulations.

Carmichael: The ESG, first it is environmental. The second is social. And the third is governance. Right now, the governance has to do with the makeup of your board and of your executive officers.

Leahy: Of a publicly-traded company.

Carmichael: Of a publicly-traded company. That’s the governance part. You have to have the right number of women and minorities and all these other groups represented on your board and in your officer group.

And I’m talking about now the executive people, not the military. Military is an entirely different issue which is ESG on an accelerated pace. But then going backward. That was the governance part.

The S part is the social part, and that gets into what I’m talking about now. The corporations across the country that are regulated by the SEC, which is all publicly traded companies, they’re doing exactly what I just described.

They’re having these enormous calls where Black employees are being encouraged to essentially humiliate the white employees. And what I’m interested in thinking about here is, does that do any good?

Carmichael: I agree. But these companies are being forced. They’re being forced. And this is why I say this is not Fink because think can’t make people do anything Michael. That’s what I’m saying.

He may like the idea and he may be for the idea, but he doesn’t have…when we say institutional racism, there’s nothing he can do institutionally because he’s just a guy that controls a huge amount of money.

But when the federal government and the SEC calls the CEO of a company and says you are not following federal regulations, we are coming after you. How do you think that CEO will react?

Leahy: But let me step back for a moment because you’re adding something new to the picture here. And I wonder if you could elaborate on this. You’re saying that the SEC has current regulations.

Leahy: Let’s step back and see if I understand the argument here. So you’re saying that SEC executives are calling up CEOs of Fortune 500 companies?

Leahy: Yeah, but here’s what I’m asking you, though. When you say they’re supposed to do. There’s some kind of communication that they’re receiving.

Leahy: We’re trying to understand what’s going on out there. What I’m telling you is my understanding is they’re getting that communication through ‘stewardship teams’ that Larry Fink’s BlackRock has set up, that go out and talk to the CEOs.

Leahy: But you’re saying that they’re getting it through the SEC?

Carmichael: No. What I’m saying is that if Fink is doing what you’re saying he’s doing, and I’m not saying he’s not, when he does it, he says if you don’t do what I’m telling you to do the SEC will. Just like in the military. You saw where the military where Austin has now unilaterally done away with the Military Code of Justice. He’s gone away with it.

Leahy: The Secretary of Defense.

Carmichael: Yes. I don’t know if you saw that.

Leahy: When did that happen?

Carmichael: Yesterday. It might have been the day before, and it was reported yesterday.

Leahy: This is 250 years of military code.

Leahy: I have a couple of things to say about that. Where is Columbia Law School Professor Philip Hamburger when we need him? He’s the expert on the abuses of administrative law, judges, and the regulatory process. And number two, and this is very interesting. Have you read something about this?

Leahy: You’re putting it logically together.

Carmichael: But I also know for a fact certain things are happening. So I’m taking the certain things that actually I know are happening and I’m piecing them together. I know, for example, that Senate Bill 1 failed yesterday because they didn’t reach 60, but they did get all 50 Democrats.

Leahy: All of them. Stepped in line.

Carmichael: Everyone one of them. Joe Manchin and Krysten Sinema stepped in line to claim that Republicans are trying to suppress the vote. That claim is false. But that’s the claim. By the way, 46 out of 47 European countries require voter ID. Republicans want people to prove who they are to vote. Democrats do not want that. Period.

Leahy: Somebody forges and somebody pretends to be.

Carmichael: It’s about all the corruption that went on in Nashville where they just literally stuffed the ballot box with the correct number of ballots. It didn’t matter if there was a voter name attached to it. I’m getting ready to read that book, and I’ll report some details. The other one is Fried Chicken Fiddlesticks or whatever it is. And that’s more about Tennessee politics historically and how similar things were done.

Leahy: By James Squires. Wasn’t he a big editor at USA Today?

Carmichael: Yes. Yes. But this is back a long time ago.

Carmichael: So I’ve got that book and I’m going to read it.

Leahy: I can’t wait to hear what you say about that.

Carmichael: But it’s all about pure voter cheating. Stuffing ballot boxes with fake ballots and then counting them because you can.