Crom Carmichael Talks Deplorable Neanderthals and Going All in with Equity 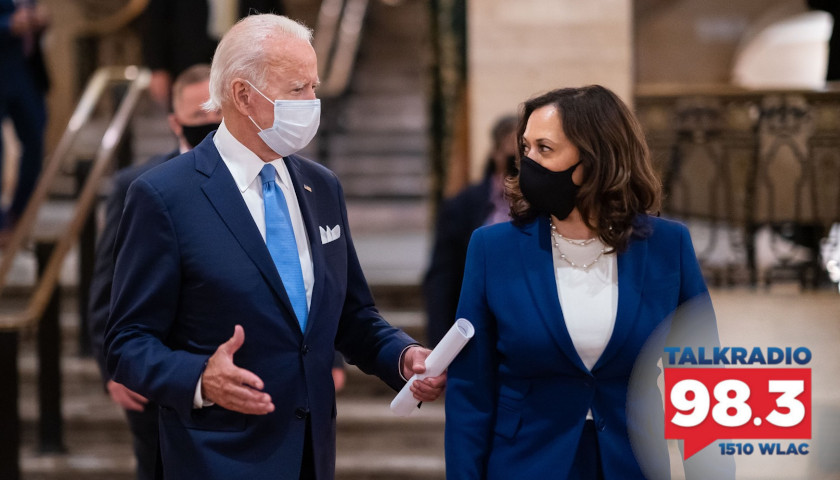 Live from Music Row Friday morning on The Tennessee Star Report with Michael Patrick Leahy – broadcast on Nashville’s Talk Radio 98.3 and 1510 WLAC weekdays from 5:00 a.m. to 8:00 a.m. –  host Leahy welcomed the original all-star panelist Crom Carmichael to the studio to weighs in on mask mandates, deplorable neanderthals, and going to the extreme of equity in all industries.

Leahy: Crom Carmichael, I’m trying to figure out if I am a neanderthal as Joe Biden describes me. Or if I’m a deplorable as Hillary Clinton described me. which is it? which am I?

Carmichael: While you actually one is an adjective. you can be deplorable and you can be a neanderthal.

Carmichael: If you are proud of either one you can say I’m going to double down.

Leahy: I think we’re going to go with that. The Deplorable Neanderthals.

Carmichael: That’s right. Here’s what is interesting about this and it really gets into the government overreach. Now, I’m going to ask you a question that I believe I know the answer to but I’m not 100 percent certain and if you don’t think we need one of those do for sure. In Tennessee isn’t the mask mandate determined by our governor? Has he said it’s county level?

Leahy: I think that is correct.

Carmichael: I believe that’s true. So that’s true. So according to our president, our governor is a neanderthal because he is allowing others to make the decision within the state. now Ron DeSantis, the governor of Florida for months, Florida has not had a mask mandate. Now Texas and Mississippi are doing the same thing and that is what has provoked the neanderthal comment.

And his is very very important because it’s kind of humorous on one hand, but on the other hand, what you have is the present United States who apparently does not think he has the authority to demand a nationwide mandate to wear a mask. Apparently, he does not think he has that authority or he would. Or otherwise, he’s a neanderthal. He’d be a self-described neanderthal for not exercising his authority.

It’s not saying we’re demanding that you don’t wear a mask. It’s a choice. And in Florida. They’ve not had the statistics in Florida or the science doesn’t show that Florida has had any worse outcomes than other states. In fact, some of the most masked states have had the worst outcomes. So the science on the masks is out. But it’s a nice gesture.

Carmichael: I look at it as a gesture.

Leahy: And by the way, if you out there of your individual choice if you want to wear a mask all day every day anywhere go ahead and do it.

Carmichael: I’ve had the first dose of the vaccine and I still wear a mask because I don’t want other people to feel uncomfortable. That’s just a nice thing that I do.

Leahy: Well, you’re not a deplorable neanderthal then?

Leahy: You are a polite deplorable.

Carmichael: Thank you. I appreciate that. I need to be called a Deplorable Neanderthal. But here’s what’s more interesting. At the federal level what you see are these appointments that Biden is making to the head of the SEC and all of these different committees and these different agencies of government. This gets back to what Neil Gorsuch wrote in his book A Republic if You Can Keep It.

Now you have these people who in testimony are saying that they believe that the SEC which regulates all publicly traded companies has the authority to mandate certain requirements that are not in the law in terms of global warming and climate change and demands for ESG which is environmental social and government points. And all these different things.

This is a very interesting phenomenon. And let me ask you this Michael. There will be a lawsuit over this. And then the Supreme Court is going to have rule over whether or not a federal agency has that kind of authority. In the name of equity, FCC overseas TV, and all that kind of stuff, could they reach all the way down into the production?

Could they reach all the way down into the production of TV shows and say that in the name of equity you no longer can cast and you can no longer have tryouts for acting jobs? You have to take anyone who applies and draw them by a lot. And then train them. And then the argument would be everybody knows that anybody can act. (Leahy laughs)

Everybody knows that because Harvey Weinstein proved it. Harvey Weinstein made any woman who would do his bidding a star? So it has nothing to do with their acting capabilities. And so in the name of equity we no longer can select our actors and actresses for shows. And in fact, you could extend that as far as you wanted to within the entertainment industry including singers and all kinds of things.

And then you could say that all professional sports teams in the name of equity must choose their players by a lot. And then just simply coach them. What I’m saying is this sounds a little preposterous, but nobody would have thought ten years ago that biological men could simply identify as female and participate against women. Nobody would have thought that but yet that’s what we now have. In fact, in Tennessee, we just passed a law saying that you participate in the sport that where you were biologically born.

Leahy: The House passed it, the Senate will pass it, and the governor says he’ll sign it.

Carmichael: Now that shows me that this is protecting women. But you have advocates of the LGBT community and some women’s organizations that are saying that Tennessee will be denied certain conferences and what not and they will not come here because of that law. And so I’m saying okay if we’re going to do this and we’re going to have this kind of equity let’s just go ahead and really extend it. And let’s even say to CNN. Well no, you can’t do it to CNN because they are cable. But you can do it to ABC, NBC, and CBS because they are regulated.

Leahy: Should we have an equity lottery for all-star panelists on the Tennessee Star Report?

Carmichael: No. Are you regulated?

Leahy: We are broadcasted. FCC regulates.

Carmichael: Well I suppose they could. (Leahy chuckles) For those three major networks, you have to pick your broadcasters by lot. In otherwords, you can take it to its logical conclusion and you do it quickly and it will get people’s attention.