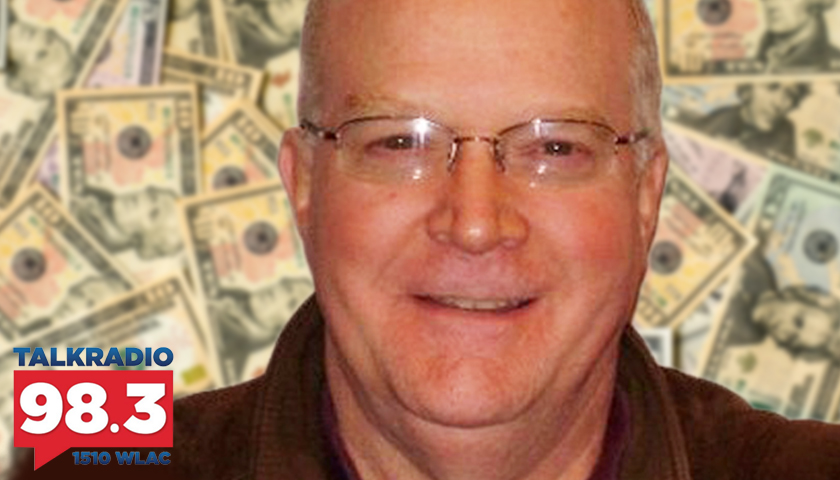 Leahy: And, of course, to make your Monday even more fun, today is the last day you can file your taxes.

Scooter: Some counties in Tennessee are going to get an extension.

Leahy: Oh, how about that? The federal deadline was May 17th that’s today. But why are we getting an extension?

Leahy: Of course! Of course! Crom, you were talking about taxes and various policies that are counterproductive.

Carmichael: They don’t accomplish what the policymakers claim they will. For example, and this is from the article, the 1986 Tax Reform reduced the top tax rate to a post-war low of 28 percent. Now, remember, earlier it got as high as 91 percent and as recently as 1980 it was 70 percent.

By 1986 it had been lowered to 28 percent. According to the so-called experts, if you lower the top tax rate from 70 percent to 28 percent, you’re going to see a dramatic drop in income. But the opposite was true. And the article says while the top marginal tax rate fell from 91 percent in 1962 to 28 percent in 1988.

The percentage of income actually paid in income and payroll taxes by the top one percent and the top 10 percent, these two groups rose to 21.5 percent and 19.6 respectively, from 16.1 and 14.4. In other words, the amount that the wealthy paid at a 28 percent rate versus a 91 percent rate actually went up by almost 25 percent.

Leahy: Because if knowing human nature and there’s a legal way to avoid paying 91 percent you will do that.

Leahy: And that’s a logical way to go because why should you work more and get basically nothing for it?

That’s a lot of money. Most people who start a business or invest in a business, they’re not investing so that they can make multiples more than a billion dollars. They might hope to. But that’s not why they do it. You’re not going to be changing the incentives to invest if you were to start taxing people’s unrealized gains above a certain value and whatever that value is.

Yet the doctor who makes a million dollars, according to Elizabeth Warren and all these left-leaning Democrats ought to be paying 50 to 60 percent of that next dollar in taxes either at the federal or the state level. Whereas Jeff Bezos sees his net worth goes up to five billion dollars in a year or 10 billion dollars and he doesn’t pay anything. So what were you getting ready to say?

Leahy: Senator Elizabeth Warren is one of those people that believes we should have a tax on wealth, not just income.

Leahy: They’d have to liquidate the business.

Carmichael: They have to liquidate the business. Her ideas, as is generally the case with her are ill-founded, stupid, and do not apply to her.

Carmichael: Let’s be sure about that last piece. Do not apply to her.

Leahy: She just actually got, apparently a $900,000. advance for this book she’s written called Persist instead of, How I Lost the Presidential Primary, by Elizabeth Warren.

Carmichael: And what is she say in it?

Leahy: A couple of things. Politico has a story about her where she said she’s going to run for the Senate in 2024. She’s 71 now, she’ll be 74 then. She would be, of course, the prohibitive favorite to win the Democratic primary there and the general election.

But she was talking about her presidential campaign and her decision to take a DNA test to show the depth of her Native American roots. In her book, she said that was a mistake to take that test. What she didn’t say was why was it a mistake.

Carmichael: Well, it was a mistake because it showed that she had been lying for her entire adult life.

Leahy: It showed what the DNA test showed that she had less than one-tenth of one percent of DNA that was consistent with residents of Peru, Mexico, and Columbia. The reason that there was no DNA, there is no DNA database for Native Americans in the United States because they don’t comply. They refused to cooperate with the DNA testing companies.

Carmichael: I can certainly understand that.

Carmichael: I don’t want to have my DNA in some federal database.

Leahy: Absolutely. And increasingly, people are seeing that. But again, there’s zero zip nada documentary evidence that she has Native American ancestry. And the average American has more than one-tenth of one percent of DNA consistent with. And the proxy they use as residents of Peru, Mexico, and Columbia.

Carmichael: But what was interesting was her reaction to the results of the DNA test. She says, case closed. I’m a Native American. That’s so typical. It’s also the same thing Biden does. If you ask Biden the question, I mean nowadays I just can’t imagine that he’ll do press conferences because the press is now beginning to ask him fairly simple questions, like, should Americans be concerned about inflation?

Leahy: The answer is yes of course.

Carmichael: The answer is yes but he walked away from the microphone. Another one is, are you concerned about the violence in the Middle East? No comment. (Leahy chuckles) What violence?

Carmichael: What about the crisis at our Southern border?

Leahy: There is no crisis.

Carmichael: And so it looks kind of silly. The other thing about Elizabeth Warren, Michael, I want to point out, is Elizabeth Warren now wants to take away the IP pharmaceutical companies intellectual property because she says drug costs are too high.

Now, I agree with the last statement. Drug costs are too high. But if you take away the IP of pharmaceutical companies, you will end all research and development. There won’t be any new drugs because there’d be no reason to make the substantial investment. Drug prices are high for two other reasons.

One is and I’m convinced, and I cannot prove it but based on this. When Trump set up his Operation Warp Speed program to bring a vaccine to the market he went around the FDA. He appointed somebody outside of the government to run the program and they had a vaccine.

And they agree with that process, by the way. So they were very angry when Trump went around the FDA and he brought the drugs to market. I think that there is an incestuous relationship between Big Pharma and the FDA to make bringing a drug to market very expensively in a lot of time so that drug companies can buy fledgling pharmaceutical companies that show promise before they get to market.

Leahy: To maintain their differentiation.

Carmichael: And then the second one is our third-party payment system also lends itself toward exorbitant drug price.