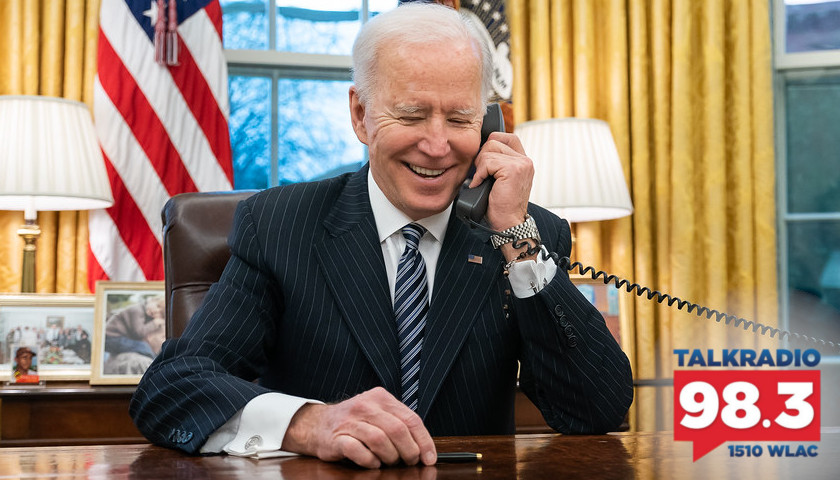 Live from Music Row Wednesday morning on The Tennessee Star Report with Michael Patrick Leahy – broadcast on Nashville’s Talk Radio 98.3 and 1510 WLAC weekdays from 5:00 a.m. to 8:00 a.m. – host Leahy welcomed the original all-star panelist Crom Carmichael to the studio to discuss Joe Biden’s right to rule as a Marxist with hopes that Republicans will exert their power once the tables are turned in 2024.

Leahy: We are joined in studio by the original all-star panelist, Crom Carmichael. Good morning, Crom.

Carmichael: Good morning, Michael. Yesterday afternoon, the legal but not legitimate current occupant of 1600 Pennsylvania Avenue, Joe Biden, gave what I thought was one of the most divisive and ignorant, dishonest speeches by a modern American president in some time. I don’t know if you saw it all. Did you see it?

Leahy: He claimed that January 6 rioters are worse than slave-owning Confederates in the Civil War because they breached the U.S. Capitol.

He also said that basically everybody who supports Donald Trump is an awful person because they actually want to have election integrity laws that make it easy to vote, but hard to cheat. It was extraordinarily divisive and mean.

Carmichael: Let me just ask, Michael. Of the sound bites I saw, not one of them surprised me. Are you actually surprised?

Leahy: Well, not that he believes this crime, but that it is his overt strategy to be so dishonest and divisive at a time when supposedly can’t we all get together.

Carmichael: I think it’s instructive. And actually, I take a little bit different position than you do. I agree that it was reprehensible what he said, but the American people need to have a choice.

And Joe Biden, if you want the biggest, most oppressive, most regulatory, high-taxing government, perhaps since FDR – and let’s remember when FDR left office, the top marginal tax rate was 94 percent – and Biden wants to be what he considers to be greater than FDR.

I suppose in Biden’s perfect world, we’d be a Marxist state, that Washington, D.C. would control all the means of production. I have some friends who were anti-Trumpers, and they wouldn’t discuss the possibility of a Marxist Democrat party.

They wouldn’t discuss it because if they discussed it, they had to agree that Trump was better than that. And it’s a really interesting thing when you discuss things with people.

If they are uncomfortable talking about the alternative, then they’re not willing to think through the choices that we have.

And what Biden is doing both by what he says in this case – not all of the things, a lot of things he says are distractions – but his deeds calling for a whole-of-government approach.

Now, we’re going to talk a little bit later in the show.

In fact, we could talk about it right now. There was a guy that Trump appointed to be head of the Social Security system. That’s no big deal except that you’re appointed for a term.

Carmichael: Biden has fired him.

Leahy: I didn’t know that. On what grounds?

Carmichael: Because he can. And I’m okay with that. Let me say why. When Trump was president, the media believed that he didn’t have the authority to fire people.

And my argument is I don’t think that’s been constitutionally tested if somebody will not carry out the policies of the administration and whether or not they can be fired.

Leahy: The whole point of having an election and having a president to head the executive department is the people are saying we support the policies of this president. And he should be able to fire people who don’t implement his policy.

Leahy: I agree with you on that principle.

Carmichael: And so what Biden is saying and making it clear to everybody, that he wants Washington to be the end-all and the be-all of government.

He doesn’t want people in Tennessee to have the right to live the way people and, under the laws, that the people of Tennessee want to live.

That’s what he is saying. I’m glad he is saying that because it shows there’s no obfuscation at all. My word of the day. Obfuscation.

Leahy: Absolutely. And, in fact, Crom, if I could just add to that point, Mark Levin has a new book out called American Marxist.

Carmichael: I have ordered it. I don’t think it’s in print yet. Maybe it is.

Leahy: Here is what we ought to do, because we know Mark Levin and Mark Levin is a friend of ours. I’m going to invite them to come to Nashville.

Leahy: That is exactly what it is. And Mark Levin is totally on point.

Leahy: No, no, no. I don’t think anybody’s quite taken that twist on it. But it’s good.

And I believe that the President of the United States has that authority. You also have Neil Gorsuch who talks about how we need to be very concerned about the bureaucratic state.

Well, under Biden, the bureaucratic state will control everything including elections, by the way.

Carmichael: Yes. He would like to control everything. And when you look at the industries that the FTC is now trying to regulate.

Not a company, but a large industry that Biden does not want to regulate. And so we’re seeing what Biden wants and what the Democrats want.

Therefore, when Republicans retake power and if the Democrats are unsuccessful at changing the election process and making it so that there’s a permanent party.

Carmichael: So if they’re unable to do that…

Leahy: We hope they are unable to do that.

Carmichael: I said if they’re unable to do that, Republicans retake the House in 2022 and control the Senate and the presidency after the 2024 election, then it’s my great hope that the next president – be it Trump or some other Republicans –  uses the power of the executive state to shrink government.

Another thing Biden has done is the Congress appropriated and Trump signed a bill that allocated two billion dollars to complete the wall. Biden chose not to spend that money.

Carmichael: No, he chose not to spend that money. If he were violating the law, he would be impeached, or there would be a lawsuit or something.

There would be criminal activity, which shows you that if Biden has the right as president to not spend money appropriated by Congress, then that means that a Republican president would have that same right.

And so I think it’s a fascinating thing to think about all the different things that Biden is doing. And then the next president can simply say: Biden did it. I didn’t think that what he did was right, but I think he had the right to do it. Therefore, I’m doing it my way.