Back From CPAC, Republican Robby Starbuck Discusses His Priorities in the Race for Nashville’s Fifth Congressional District 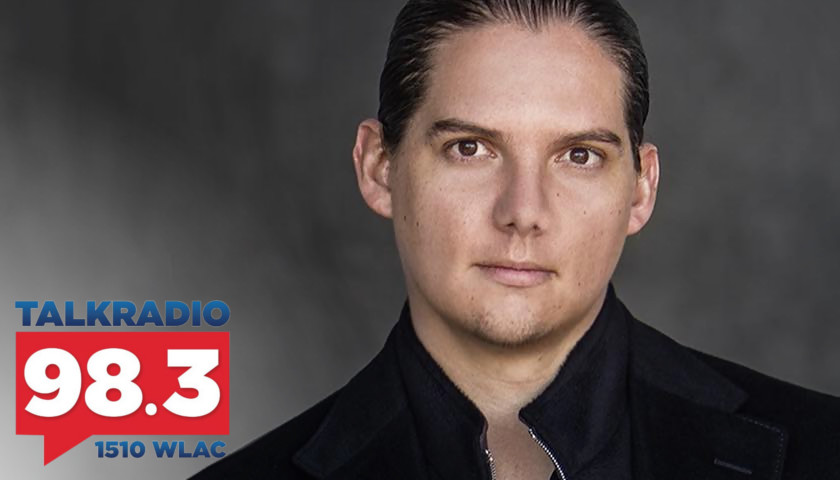 Live from Music Row Monday morning on The Tennessee Star Report with Michael Patrick Leahy – broadcast on Nashville’s Talk Radio 98.3 and 1510 WLAC weekdays from 5:00 a.m. to 8:00 a.m. –  host Leahy welcomed Republican candidate for Nashville’s fifth district Robby Starbuck to the newsmakers line to discuss his appearance at CPAC over the weekend, what motivated him to run for office, and his top priorities.

Leahy: We are joined by Robby Starbuck who gave a great speech at CPAC the other day and was very well received. Attacking big Tech in his Monopoly. He’s running for congress here in the fifth congressional district in Davidson County. Good morning, Robby.

Starbuck: Good morning Michael. How are you doing today? Thanks for having me.

Leahy: Well, happy birthday. Your birthday was over the weekend and you announced for Congress and gave a ten-minute speech that was very well received at CPAC. How did that come about?

Starbuck: Well, that’s actually you know, that’s an interesting question. It’s a long line, like anything good in life a lot of good people telling good people, hey,  you should meet this person and you should meet this person. I mean that’s kind of the nature of life. So eventually it got to the people who run CPAC. And they reached out to me or like hey, we’ve been told that you’re doing great things and we looked you up. We saw what you had to say. We watched some of your other speeches and we would love to have you. And it was really that simple.

Leahy: You have quite a background there. What happened when you said you were a Republican back in 2015?

Starbuck: I don’t think there’s anything worse you can say in Hollywood than admitting you are a Republican. So it didn’t go. You go from being invited to all the parties and all that stuff, which I never went to anyways and never liked. I was never one of those people. But you’re invited to everything and everybody loves you and blah blah blah and you come out and say you’re a Republican and it’s like telling them you’re a leper and you want to touch them. (Leahy chuckles)

It’s the worst possible thing you could do. But I would do it over and over again And I said that in the CPAC speech that I would do it over and over again despite the loss of business and the way my kids were treated and all that. Freedom runs in my DNA from my family coming here from Cuba. I will always be eternally grateful to America because I would not be alive if it were not for the existence of America.

So every chance I get to stand up for freedom I will take it and I will do it. And I saw the signs many years ago that what happened in Cuba could happen here. And when it got to that boiling point where I knew I had to make a decision about whether to keep my career or to speak up, it was a very easy decision for me. One because of what happened in my family. Leftism stole everything from them in Cuba. And I mean literally everything.

But secondarily because I know that if I didn’t do anything one day when I go to heaven my grandma would be waiting there with a shoe and she’d be smacking me with it for the rest of eternity. And she would rather me take that beautiful experience and have turned it into help for me hitting me with that shoe if I didn’t do something now. So it was a very clear decision that I had to do something.

Leahy: When did you formally announce your candidacy for the Republican nomination in the fifth congressional district here in Nashville?

Starbuck: Well, I first actually did it after the election in November because I was so upset about how things were running. And sort of how some of the establishment were defending the ideals that I hold, which when I say defending, I mean they were not defending it. And so I felt like I’ve got to stand up and do something. And I also saw a great opportunity to get rid of one of the Cooper’s because I don’t know that I have met very many people in Nashville who care for the Coopers. And I think that is the best opportunity there’s ever been to get one of them out of office.

Starbuck: For now people can go to FreedomForever.us. People who live here for have lived here for a long time will know that we have to redistrict this year. And so there’s a minute possibility the district name or number rather changes. So we’re waiting another week or two before we do the filing where we’ll start fundraising doing all that stuff. But you can sign up at FreedomForever.us right now to sign up to volunteer.

We’re also going to help other candidates who don’t have as much of a national platform that are great candidates because I think one of the problems we have in America as you know, we’ve seen some of these people who are just there in there for 20 terms and they’re not doing anything. All they’ve done is rename a post office in the 20 years they’ve been there or 40 years whatever it is.

And we need real fighters for America and fighters for freedom. So I’m going to do everything I can to help other candidates that really have sort of the more American agenda that we can help with. And if I can use that platform to help others I will. FreedomForever.us is the best place for us to do that.

Leahy: FreedomForever.us. Now tell us about the redistricting you anticipate for I haven’t seen a lot that says that the fifth district will be that much different in the 2022 election than it is in 2020. Do you have any indication that will be significantly different?

Starbuck: I think that it will be. I do. I think people are going to be surprised. I do think that they will re-district the fifth and we have the room to do it. If you go back a decade ago and you take a look at a lot of the redistricting plans there were you can look and see that those outer districts if you go back when you say hey, what would have happened in these elections had we done it 10 years ago? We would have won every one of those districts by significant margins and we would have won the Nashville district five and done so easily.

I think it’s a no-brainer and I think a lot of people in the legislature understand that. But it’s a no-brainer to better represent the will of citizens here in Tennessee. And if you look at a state like Tennessee you look the way we vote and you go around anywhere it’s insane that we have two people in Congress who are Democrats in the state of Tennessee. Not just Democrats, but they’re voting you know with the far left many times. The very far left. We’re not talking about the blue dog Democrats of 20 years ago. It’s a very different party now.

Leahy: If elected, what would be your first top priority?

Starbuck: My top priority not just when I’m first elected, but for the entire time would be to protect and expand freedom. And that’s the lens I’m going to look at everything through. Am I protecting freedom and my expanding it and I’m making life better for people? If things are not making life better or easier for people in this district and it’s not expanding and protecting freedoms that they have here, then it’s not something that I’m going to throw my weight behind. But those are the very simple things and I’m going to look through the lens of when I’m looking at policy.

Starbuck: So I support Josh Hawley’s model. I want to break up Big Tech. You look at the effect it had on small businesses. Let’s take Amazon for instance. We used to do this as Republicans. We used to trust-bust. And these companies like Amazon, they’ve destroyed small businesses. So many small business owners have lost their businesses lost their way of life because Amazon was allowed to play really dirty games with how they grew their company.

They did it in a way where their business model was essentially to lose money in order to choke out small businesses until they had such a large market share that they couldn’t be beat anymore. And so we need to look at those companies through that lens. And then on top of that there’s just the freedom of expression issue. Social media has turned into the public square and we need to treat it that way.

And people whether they are a Republican, Democrat, Socialist, or a Communist I believe you have the right to your voice in the public square. And I think we have seen far too much censorship. We’re seeing now with the Amazon they cancel conservative books even. And you have the majority of books sold on Amazon. All of these companies, social media companies, and big tech companies as a whole largely need to be broken up. And the few that do not need to be broken up do need some regulations in place that make it very clear that they cannot discriminate against people for their political beliefs.

Leahy: Do you support or oppose the revocation of Section 230 of the Communications Decency Act, the Communications Act of 1996, which provides litigation liability against censorship efforts by Facebook, Google Twitter, and that crowd?

Starbuck: Yeah, so the truth is the best way to handle 230, for now, is to rewrite it. We need to rewrite it, but it can’t be entirely cooled because what will happen then is and I think for a lot of people this hasn’t been explained fully, but what would happen if we pull 230 entirely? And we just got rid of it with nothing in its place? Then social media companies would not allow you to post immediately.

So if there were some big event happening today and you wanted to post about it and you said oh I saw this great speech today blah blah blah you would submit it and Twitter would have to hold that Tweet and have it reviewed by legal to ensure that it was not something that they saw as a legal issue. And so I don’t think that that is something Americans want to deal with when you’d have to wait a week for your posts to be approved. So I think revising it and making it very clear is the path forward.

Leahy: Robby Starbuck director and candidate for Congress in the fifth congressional district for the Republican nomination. Will you come in studio and talk more with us in the future?

Starbuck: Absolutely. Absolutely. I would have done it today. If it was just this was so tight coming back.

Leahy: We got you on that one, Robby. Thanks so much for joining us. Have a great day. We look forward to seeing you in the studio.