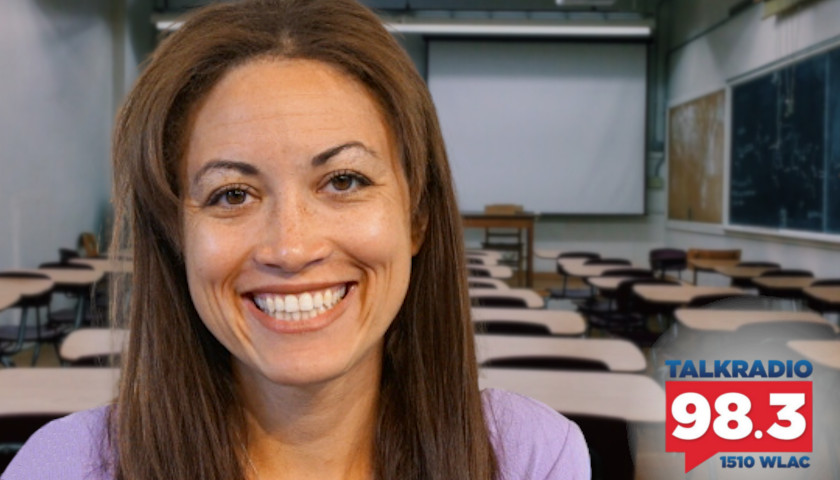 Leahy: In studio the mayor of Maury County, Andy Ogles. Andy, it’s always fun to have you in here because you tell us about stuff that we don’t really hear about in the more establishment media.

All the growth going on in Maury County. And then I guess you’ve been getting around the state a little bit as well. You’ve got some kind of freedom tour. I don’t have all the details on it, but I think you were up in what, East Tennessee recently?

Leahy: Kingsport. Tri-cities. By the way, let me just say a little bit about Tennessee. For those of you who are here, of course, are new.

It’s the greatest state in the country. There’s no comparison, particularly, with how beautiful the Tri-Cities area is. If you have not been there, you got to go.

Ogles: It’s gorgeous. And there’s so much diversity from the Reelfoot Lake, the Delta of Memphis, Middle Tennessee. And then, of course, the Smoky Mountains and the Appalachian Mountains in East Tennessee.

So it’s a great opportunity to just really appreciate the state. We’ll be taking the kids is on the road, the family, as a travel-the-state over the next few months.

I was up in Kingsport on Saturday afternoon. Four hundred people showed up to talk about freedom and liberty.

Leahy: Okay. So tell us about what the tour is called and what you do on the tour and who’s all part of it.

Ogles: So it’s a freedommatterstour.com. So you can go to the website.

Leahy: So the word that keeps coming up is matters. Because you have the Black Lives Matter movement. And our tagline, by the way, at the new Star News Network site, which is the aggregate site for all of our eight and soon-to-be 11 state sites.

Ogles: Which you just launched.

Leahy: Which we just launched.

Ogles: Which is fantastic.

Ogles: I have to admit, I did get a little preview.

Leahy: Gave you a preview. The tagline that we’re using for now, and I think we’ll stick with it, is State and Local News That Matters.

And we just came up with that on our own. One of the things to get on the side, we’ve decided to be distinctive from other news networks in the sense that if you look at it’s all part of our design.

Go to Thestarnewsnetwork.com and just look at it because you’ll see, the color scheme is very different than other networks.

We have more variations of orange and black and white, and it’s pretty cool. Most other networks have versions of red, white, and blue, basically. NBC has more colors on its scheme.

Ogles: You focused on that word matters. It matters how much influence Facebook or Twitter has in our lives. It matters whether the mainstream or the lamestream news media is objective.

It matters whether or not you’re involved. And it matters who is running your local state government because if you’ve ever been a sports person if you think about baseball, I grew up playing baseball.

The farm team, your school board, your Commission, your mayors, those are your state reps and your state senators and, or, congressman for the future.

The left figured it out a long time ago that they would take over the school boards. And they created this farm team, this bench of candidates that they could select from.

It was tryouts for the big leagues. And along the way, they’ve stolen the curriculums in our school. Even now in the state of Tennessee, every one of the five curricula, I think it’s five.

Maybe it’s six, has Critical Race Theory in them. And so the legislature created this law that they had to ban CRT in the state of Tennessee.

And now that they’ve gone back and looked at every curriculum in the state of Tennessee has CRT. And they’ve put themselves in a box because they don’t have a curriculum that hasn’t been poisoned.

Leahy: And supposedly, Penny Schwinn is going to come in. And by the way, we had a story about Metro Nashville Public Schools, where there was a school board meeting, and there were opponents to the teaching of Critical Race Theory there.

There were more proponents of it, and they were teachers who were saying, well, we’re going to keep teaching it.

Leahy: What is the state of Tennessee going to do when these teachers in Shelby County and Davidson County continue to teach Critical Race Theory?

What is the state of Tennessee going to do under that law? Supposedly, Penny Schwinn will hold back money from them. Do you think she’s going to do that? I don’t.

Ogles: Well, time will tell. She’s the sole judge and jury as to whether or not CRT is in the curriculum.

Leahy: She’s a little biased. She introduced Wit and Wisdom to 33 counties and overrode the textbook committees. And that’s kind of a precursor to CRT.

Because it’s less about you learning the data in front of you, learning math or learning the history, learning how to read than it is, oh, well, you’ve been a victim because of X, Y, or Z.

This is why you can’t perform at the same level as your peers. So it’s built on making excuses, and it’s more complicated than that, clearly.

But, again, that’s how it’s being weaponized to steal the minds of our children. And that’s what’s happening. And if you don’t believe that, you’re not paying attention.

They want to keep teaching it, and strong leadership needs to push back against it. And I’m very skeptical that Penny Schwinn will exert any leadership in that arena. That’s just my view.

Ogles: Well, we’ve talked about it before. Once she introduced the well-being initiative back in September of last year I called for her to be removed from her position.

Leahy: And was she?

Ogles: Of course not. And again, Paul Revere, I sounded the bell. I told you this was coming back in September. And now here we are almost a year later.

Leahy: So talk about that wellness initiative and what was so egregious about it that she introduced?

Ogles: Well, again, you have to understand. And I’m not here to disparage her. She’s a nice person. But she comes from Berkeley.

Ogles: Nothing says conservative like Berkeley. (Leahy laughs) UCBerkeley. So, again, why are we surprised that she has this worldview that the state should teach, the state is the parent for your children?

Leahy: Just remind me what it was, because it was so egregious.

Ogles: Back in August, they rolled out this well-being initiative. The governor appointed roughly 30 people to this committee.

They came out with this idea that every child, every child ages zero to 18, would be interviewed by this newly created position, wellbeing liaisons.

So it’s part of this greater initiative to make sure that your children were well if you will. But the kicker is, every child would be interviewed without their parent present and without parental consent.

Now, the administration immediately said, oh, but there’s an opt-out provision. But if you read it in detail, you have to get permission to opt out.

So it’s not an opt-out provision, because all it takes is your wellbeing liaison to say, nope. I’m going to interview your kids anyway.

And the interviews can take place in your home. So if you’re homeschooled, they’re going to take place at home. And by the way, it’s zero to 18.

So if you have a child that’s not in school yet, your child is going to be interviewed. And it’s the questions like, do your parents own guns? Are you stressed? Do your parents fight?

Leahy: None of your business.

Ogles: It alarmed me to an extent such that I reached out to the governor directly.

Leahy: How did that conversation go?

Ogles: That was a private conversation between me and the governor. But I think the outcome is she didn’t get fired.

Leahy: But the policy was reversed after it was exposed.

Ogles: So I held a press conference. Other conservatives across the state jumped on board. And about  9 – 10 days – after my press conference, they pulled that initiative back.

Leahy: And I get the feeling it’s what they want to do. And if it weren’t brought to the attention of the public, they probably would have done it.

Ogles: Well, they get caught with their hand in the cookie jar. If there is an upside to COVID, more moms and parents were engaged in – essentially homeschooling, they could hear the Zoom classes and some of the CRT, these well-being initiatives.

And this invasive culture where the state is now going to come into your home and tell you not only how to teach your children but how you should raise your children.

We’ve got a problem in this country, and it’s time that our governors wake up to that fact.