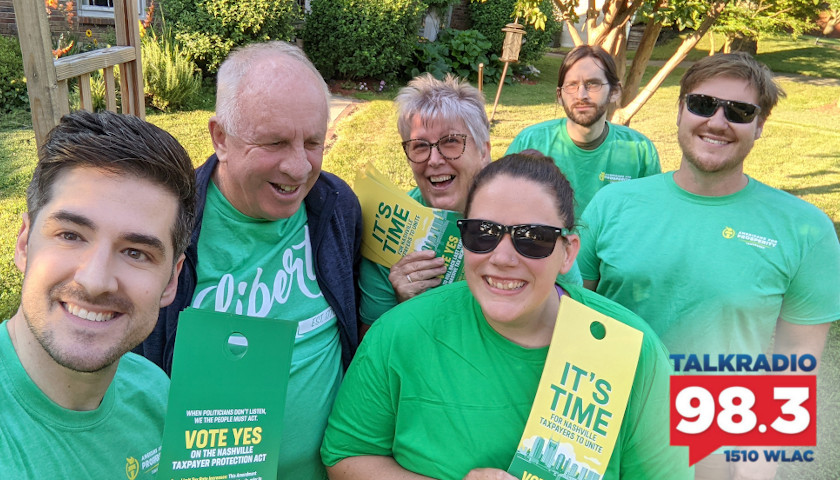 Live from Music Row Tuesday morning on The Tennessee Star Report with Michael Patrick Leahy – broadcast on Nashville’s Talk Radio 98.3 and 1510 WLAC weekdays from 5:00 a.m. to 8:00 a.m. – host Leahy welcomed Grant Henry of Americans for Prosperity-Tennessee in the studio to weigh in on the recent decision made the court citing the unconstitutionality of the Nashville Taxpayer Protection Act, therefore, preventing it from proceeding to a vote by Davidson County citizens.

Leahy: We are joined now in studio by our good friend Grant Henry. He’s the grassroots director for Americans for Prosperity, Tennessee. Good morning, Grant.

Leahy: Yeah, we’re having a good time. Also in studio with us, the mayor of the turbocharged bastion of freedom, Maury County, Andy Ogles. Good morning again, Andy.

Leahy: Grant, what on earth happened with the judge’s decision to basically declare that the Nashville Taxpayer Protection Act, which received all of the signatures necessary to get on the ballot for the second time, why did the judge throw that out?

Why did the judge, in my view, deprive Davidson County residents who are supporting a common-sense conservative referendum get thrown out when a left-wing referendum that actually had fewer signatures than this that set up the left we hate the police, Community Oversight Board sail through without any judicial opposition?

Henry: First and foremost, this ruling silences the Nashville voters and taxpayers’ voices who continue to be saddled with harmful tax increases. Nashvillians are tired of Mayor Cooper and Metro’s spending addiction to put the city in jeopardy again and yet one more time.

And to answer your question directly, this ruling made by Chancellor Russell Perkins, I’m reading directly from News Channel Five here stated, “given the six proposed amendments are not severable, none of 4 Good Government’s proposed amendments to the Metropolitan Government’s Charter permitted to be considered for a referendum and Election Day of July 27.”

Now, you’ll know this clearly, but that idea means if one of them fails, they all fail. And in my personal opinion here, let me draw a hard line of delineation between myself and Americans for Prosperity.

In my personal opinion here, it seems quite clear Chancellor Perkins was desperately searching for justification in his analysis pertaining to this allegion severability situation.

Leahy: We’ve had Jim Roberts here in studio who said very specifically that these six proposals were, in fact, severable. In other words, you could reject one but still vote on the other.

Apparently, the judge disagreed with that. I’m not a lawyer. I don’t play one on the radio. You however are a graduate of a law school. What’s your view on the decision?

Henry: The decision felt like an overtly partisan interpretation of both previous case law and the petition language itself. Again, that’s as far as I’m concerned. But here’s what I think ended up happening is for several of those amendments, Chancellor Perkins realized and ruled that he didn’t have jurisdiction.

Now, what this meant was that he was then forced to say that at least if one of them doesn’t work, then all of them are going to have to fail, because otherwise, the other result would have been, hey, amendment one, we have to keep that off.

But the ones where I don’t have jurisdiction say amendment two, three, four, and five, those have to stay on. There was no way he was gonna be able to get away with that. And I put big air quotes here.

Leahy: By the way, our listeners. Yes, he did. I can verify he did put those air quotes on ‘to get away with.’

Henry: I personally believe the course decision only perpetuates the fiscal mismanage we’ve seen in places and an even greater need on the state legislature. Let’s shift here for just a second and greater need in the state legislature to strengthen our truth and taxation law that will insert some fiscal responsibility into this city’s finances and allow voters to reject corporate welfare and massive tax hikes.

We at Americans for Prosperity are going to continue to advocate for taxpayers throughout the state to work to bring structural reform that reigns in not just Nashville’s outrageous spending, but other cities across the state, too, with a super high debt ratio. But look, I will say there is some sliver of hope left. I’m sure Jim Roberts has talked about that.

Leahy: I’m glad we had at least a sliver of hope. What, pray tell, is that sliver lining?

Henry: The Election Commission decided last Friday that they will appeal this decision. I’ve been told there will be an expedited appeal going through here now in legalese I suppose that still means we’re going to have to wait about a month for any real ruling to come down.

But in the meantime, the Election Commission, I suppose in some way to show how confident they are about this decision going their way has actually set a provisional date out towards the end of September.

So Americans for Prosperity, we’re going to sit back, wait for a minute, see how this thing rolls out. But again, we are going to continually fight strongly for things like truth and taxation for when this comes up again on the ballot, possibly in September.

And we’re going to hit the ground running. But I’m saying I’ll pay attention to the state legislature next year. The truth and taxation certification process is going to be an incredible thing.

Leahy: It strikes me again not being an attorney. A couple of things strike me about this. Jim Roberts told us they were clearly severable. They wrote it so that it would be severable. This was an issue the previous time that they lost that the judge brought up.

I will say, however, to me it seemed like it was a mistake to put six elements on the ballot. I think there should have been just two, one being the rollback of the property taxes from the 34 percent increase and then the second that would have prohibited the City Council from introducing a smoke screen alternative that would confuse voters.

That would have been my view on the best way to go. But I guess, reading the opinion from what I saw, I think that the judge ruled that the rollback of the 34 percent property tax increase apparently was not constitutional. Is that right?

Henry: Right. And that’s why he kept citing the case called the City of Memphis versus…I don’t remember. But the idea behind that is as long as something is deemed facially and constitutional, that is on its face, you can tell it’s unconstitutional.

The judge, the Chancellor here can get in before the vote happens to deem something unconstitutional which is absurd.

Leahy: I have a vague recollection of that case City of Memphis. I think it is a misinterpretation of that ruling. And there’s a legal term where you take something that is sort of an aside comment, and you say that that was the ruling.

Henry: Dicta or something.

Leahy: Yeah, exactly. It’s dicta. In other words, if it’s a side comment and not the court of the ruling. And I think I’ll have to get our legal experts on that. I think that the City of Memphis precedent would fit in that category. Well, the appeals court will take it up I think at some point.