American’s for Prosperity-Tennessee Grant Henry Calls on Conservatives to Come Out and Voluneteer at Grassrootsnashville.com 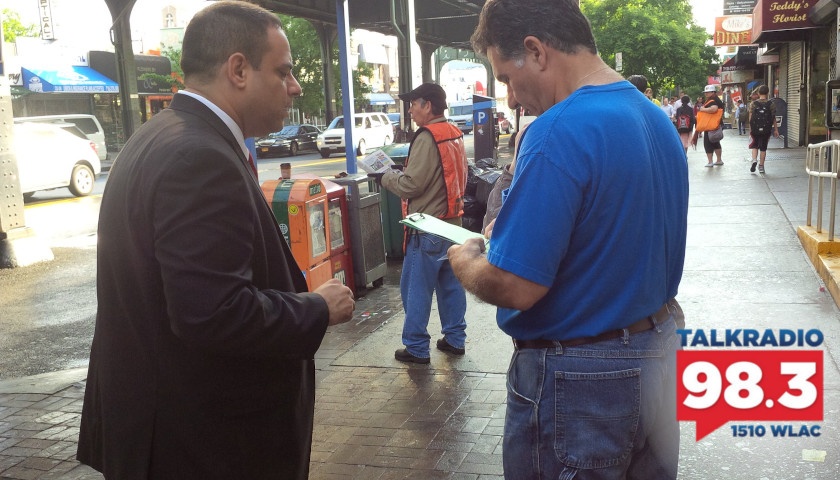 Live from Music Row Friday morning on The Tennessee Star Report with Michael Patrick Leahy – broadcast on Nashville’s Talk Radio 98.3 and 1510 WLAC weekdays from 5:00 a.m. to 8:00 a.m. – host Leahy welcomed Grassroots Director of American’s for Prosperity-Tennessee Grant Henry to the newsmakers line to outline their efforts urge people to volunteer to get out the word for the Nashville Taxpayer Protection Act referendum on the July 27 ballot.

Henry: Thank you for the opportunity again to be on.

Leahy: Well, great. And thanks for coming in studio last week while I was goofing off down on the beaches of Florida.

Henry: (Chuckles) You don’t tell people how nice that studio is down there, too. It was a fantastic opportunity. I had an incredible time. And if you ever want me to come back, you don’t have to twist my arm. I promise.

Leahy: We’re going to have you in studio. So you liked the palacious studio here?

Henry: Yeah, it was great. It was an awesome time. Really, really nice place. But you’re a radio guy, aren’t you?

Henry: I was back in the day. In a former life. That’s correct. Yes.

Leahy: In a former life. Did you have your own program up there in Knoxville?

Henry: Yeah. I actually was entitled Real News back in the day. It was a playoff Trump’s fake news type thing. (Leahy laughs)

Leahy: We try to cover news in a real way here. So you were the groundbreaker. We’re just following your lead, Grant.

Leahy: Grant, now tell me it like we want to talk about the Nashville Taxpayer Protection Act. It looks like it’ll be a referendum on the ballot of July 27 of this year. Now, the lefties are trying to do everything possible to stop it.

Jim Roberts, the lawyer who put this together, will be with us at 7:15. He’ll give us an update on the legal side of things. I think it’s looking good for the home team there, by the way. So I think that it will be on the ballot.

But tell us what it is that you plan to do at  Americans for Prosperity to gather support for those who want to turn back or roll back the property taxes that Mayor Cooper put in here and want to vote in favor of that roll back on this July 27 referendum in Davidson County? What are you doing at American’s for Prosperity?

Obviously, Americans for Prosperity are known as the ground game type people. We’re going to be making phone calls for the next couple of months here, doing several different phone banks, reach out, get in touch with me, go to that website, sign up for an opportunity to do that.

We’re also going to be doorknocking, which is a major, major way to meet people where they’re at, create an organic community buzz and a groundswell that is irrefutable. We’ll be starting doorknocking next weekend and going pretty much every weekend for June and July other than that July fourth weekend.

And right now since the last time, we did this when we gathered those 27,000 signatures, meeting people where they’re at at the doors is the best way, not just to get the word out about this referendum, but I’m telling people also, it’s the best way to send a signal across the bow to Metro government that, listen, Conservatives are here.

We are a loud major voice in the area. They’re structural, systemic change that needs to happen right now. We will not be refused. To make your voice heard come in these doors, tell these people to their face as well.

Leahy: The website is grassrootsnashville.com and that sends you to an AFP-related site. You can sign up there. There’s an action center. And if you want to help out financially, there’s a donate button. I am a big fan of Get out the Vote door to door Canvasing.

As you may recall, back into 2013, I set up a little conservative political action committee called Beat Lamar. And you may recall, we had a very aggressive door-to-door campaign and ended up endorsing a candidate to challenge Lamar Alexander named Joe Carr.

And in the primary of August of 2014, largely because of that very aggressive door-to-door campaign, Joe Carr became very close to defeating Lamar Alexander 49 to 40. And it turned out in Middle Tennessee, where the grassroots activists were most engaged, we had probably about 90 kids at any time over a three-month period knocking on doors.

It’s very effective. I am excited to see what’s going to happen because, with COVID-19, grassroots door-to-door campaigning stopped. This looks like this may be the first major effort in the country where conservatives are back doing door-to-door canvassing.

Henry: And the door-to-door canvassing is part of it. We will also be doing mailers. We’re doing massive media breaks and a social media campaign as well. Another thing I’d like to give people a heads up on or at least get their help on is look, if you have a story to tell, okay, anecdotes pull heartstrings.

We understand that. We understand that. If you have a story to tell as to how this referendum will affect you, how it will make your life better, I will give you room to breathe maybe you came in as some of my favorite people around here now call themselves California refugees.

Give me a personal phone call. I will put those stories on camera. We will spread it around or at grassrootsnashville.com. And I’m telling you, our city, Nashville, will continue to dig itself into a deeper hole and raise taxes unless voters can decide whether some guard rails are needed to curb Nashville’s spending addiction that puts us in the current crisis we are at right now.

We at American Prosperity look forward to getting out in this community and letting people know that they can play a role in getting Nashville’s priorities in order and help them help our city prosper for years to come.

And Michael, let me tell you, some of these situations are just inherent to Nashville alone. Nashville has nearly twice as many employees per 1,000 residents as the more populous cities of Louisville, Indianapolis, and Jacksonville.

Leahy: If you do not want to California Nashville, you should go to grassrootsnashville.com. It is June the 11th and this is like six weeks before the referendum, but there will be early voting as well, won’t there?

Henry: That’s right. Early voting starts on July seventh, and early voting will go to July 22. Election Day itself will be on July 27. And again, as I said before, we’ll be knocking every Friday and Saturday.

Other than that July fourth weekend. We’ll be setting up call banks all over town. And one more thing here, too. Well, I am not an out-of-the-box thinking kind of guy, okay? I think very analytically.

If it’s done well, one way, I’ll do it that way again, if you are an out-of-the-box thinking kind of person, give me a call also. Reach out and sign up on Grassrootsnashville.com I’m open to any and all types of changes here.

Whoever is running this other campaign here, Michael. And I’m not pretending to speculate that I know all the players on the other side. I do know they’re spending hundreds of thousands of dollars already. Already! We’re just now starting the TV ads.

Leahy: And the TV ads are so misrepresentative of what this referendum would do if it passed. If you want to lie, just join the campaign against this referendum. That’s what they’re doing, in my view.

Henry: Yes. And all we’re asking for, really, is to hold Mayor Cooper accountable for what he said during his own campaign. Let me read you a quote real quick, what Mayor Cooper said while he was campaigning.

A properly managed city should be able to thrive on a four-point five percent revenue increase. Metro needs a return to fiscal stewardship.’ I don’t feel good about asking taxpayers to pay more in taxes when we are not properly managing the money we already have.

That was Mayor Cooper while he was running for this position. And since 2015, The Beacon Center has identified more than $300 million in Metro Nashville waste, fraud, and abuse in their yearly pork reports.

Again, it’s a spending problem with Nashville. We’re reaching out and saying, Listen, Mayor Cooper, Metro Council, Cooper ran on a ticket of being fiscally responsible. Now is the time to finally have your voice heard. Come out, knock on doors with us. And it’s a blast out there, too.

Leahy: Grant Henry, with Americans for Prosperity Tenant for Tennessee. Thanks so much. One thing I think we conclude about this is, apparently Mayor Cooper does not feel good about what he’s done as Mayor based on that statement? David Grant Henry, thanks so much for joining us this morning. Come back again if you would, please.