All Star Panelist Clint Brewer on China: ‘We Have Not Economically and Politically Drawn a Line in the Sand with Them’ 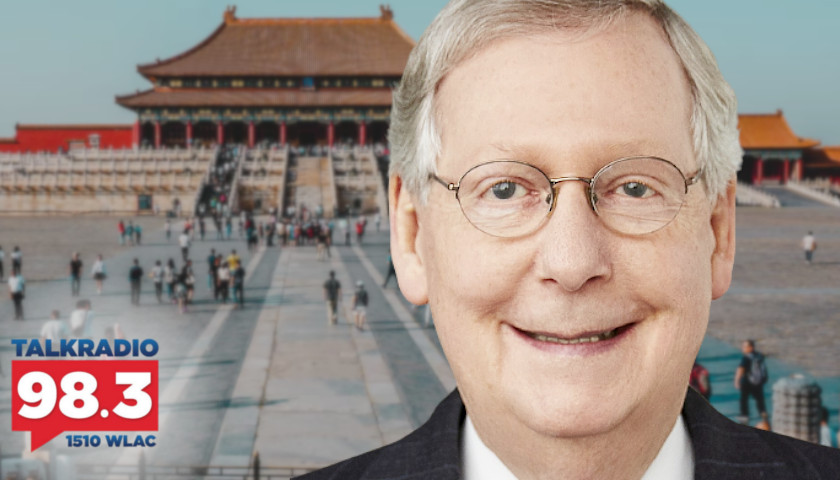 Live from Music Row Thursday morning on The Tennessee Star Report with Michael Patrick Leahy – broadcast on Nashville’s Talk Radio 98.3 and 1510 WLAC weekdays from 5:00 a.m. to 8:00 a.m. –  host Leahy welcomed all-star panelist Clint Brewer in studio to weigh in on the new book by Peter Schweizer, Red Handed and how many of politicans on both sides of the isle are connected monetarily with the Chinese state.

Leahy: You know, Clint, every time you’re on, I get a lot of texts and people like the interaction.

Leahy: Some don’t agree with you, though.

Brewer: That’s okay. I probably don’t agree with them.

Leahy: But this is the reason you’re here, because we unlike, I don’t know, CNN, ABC, NBC, CBS, like the free and fair exchange of ideas.

Brewer: The delta, the difference between how we view things is like a 20, 30 percent.

Leahy: 10 percent maybe, but depends on the issue.

Brewer: It depends on the topic.

Leahy: Yeah. But they like it when we disagree. Okay.

Brewer: Let’s find some stuff to disagree about before the hour is up.

Leahy: (Chuckles) Alright, Clint Brewer. Now this is something I don’t know if we’ll disagree on this, but let us present the information. You know, at The Star News Network, The Tennessee Star and all of our 10 state outlets, soon to be 15, then to be 25 by the end of the year, if all goes well.

We are moving towards not just radio, but we are a multimedia operation doing video. And we have brought on board two nationally recognized journalists.

Neil W. McCabe, who was my colleague at Breitbart. We worked with Pat Cadell, by the way on doing some of the polling in 2016.

And then Dr. Susan Berry, an education expert, has joined us. But Neil spent three years at One America News. And so we are taking him and he is going out and talking to the newsmakers in all our states and getting exclusive stories.

Now, the big, big story out there right now has to do with the expose that the journalist Peter Schweizer put together on his new book. I think it was number one at Amazon. Red Handed. How American and Elites Get Rich Helping China Win.

So Neil McCabe went down, we flew him down to Tallahassee, Florida, where Schweizer has his offices. And we got a 90 minutes exclusive interview. And we have a series of clips that you can go to The Tennessee Star and watch.

And the stories are there, the one that we found most interesting and the one we’re going to talk about right now and you’ll hear this is a long clip.

It’s about two minutes, but we’re going to play it and we’ll like to get your reaction to it. The headline: Mitch McConnell Linked to Chinese Communist Party Through Wife’s Family.

In his new book Red Handed investigative journalist Peter Schweizer documents how the Senate’s top Republican, Kentucky Senator Mitch McConnell, is tied through his wife to the top leadership of the Chinese Communist Party.

He also told The Star News Network that his wife, Elaine Chao, as Transportation Secretary, used her official position to help the shipping business of her father, James Chao.

So when Mitch McConnell married Elaine Chao, he married into a family that had very substantial connections on mainland China with the Chinese Communist Party. James Chao, who was Elaine’s father. That would be Senator Mitch McConnell’s father in law grew up with Zhang Zi min, who was the Premier of China in the 1990s.

Schweizer said McConnell, in addition to receiving millions of dollars in political contributions from members of the Chao family, also received a massive gift from his billionaire father in law.

When it comes to Mitch McConnell, it’s pretty clear his financial fortunes are fused with those of the Chao family. In fact, James Chao gave him a gift more than a decade ago of between $5 and $25 million. And that basically quadrupled his net worth overnight.

And it creates a circumstance where if Mitch McConnell were to do something that Beijing did not like, they could literally destroy the business overnight.

Peter Schweizer’s research into the McConnell Chao family business and their relationship with the Chinese Communist Party begged the question that if McConnell has to choose between the fortunes of the American people or the billions at stake in his own family fortune, who would he choose? Reporting for The Star News Network this is Neil W. McCabe.

Leahy: That’s original reporting from our own Neil W. McCabe, our national political editor for The Tennessee Star and The Star News Network. Clint, what’s your reaction to that?

Brewer: These aren’t allegations. They are largely fact. It’s been out there about McConnell and his wife since about 2017, and it’s evolved. Here’s what I’d say, a couple of things. One, I’ve said it on the show many times.

America’s single biggest overriding issue pervading all aspects of the economy, politics, society is our ongoing, I call it, relationship with China.

I don’t think we have had a requisite amount of accountability for COVID-19 from China. I think that up until the Trump administration, our trade policy was massively imbalanced with China.

I think that we have not economically and politically drawn a line in the sand with them. And I think books like this kind of create a compendium of information for readers that can allow them to see the big picture.

I think it’s important to note that America’s business elite have business relationships with China. They have investments there. General Motors, which has a plant in Tennessee, also has a plant in China.

So we are very cross-pollinated economically with China as country. And I think information like this is something that’s vital for the American people to have.